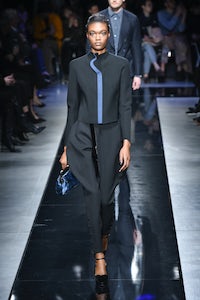 MILAN, Italy — What is there left for Giorgio Armani to say? He called his new collection Rhapsody in Blue. Unlike the swoon and vigour of George Gershwin’s classic composition, Armani’s clothes had a stately severity, but he was at least acknowledging that blue in all its shades, from midnight to midday, is the sweetest spot of his latter years.

Armani made some changes this season. He moved his presentation across Via Bergognone, from the purpose-built “teatro” in his HQ to Armani Silos, his exhibition space. And he showed his men’s and women’s collections together for the first time. Maybe the reconceptualisation was a grab for relevance. Maybe relevance is irrelevant for Armani at this stage in his life and work. Whatever, it worked to see his entire statement for the season in a reach-out-and-touch intimate setting. And that offered him the opportunity for a new kind of coherence. In this show, Armani’s men and women definitely belonged together as the perfect He&She of a rich but rigorous new world. For the men, buttoned-up sartorialism. For the women, an elongated jodhpur leg topped by a compact little jacket. So much for formulas — when he broke away from them, the collections came alive.

You wonder at Armani’s creative process at this stage on his life. He’s not afraid of endless repetition on his catwalk — the menswear in this show suffered from a surfeit of similarity - because he is confident that he can add one memorable little detail, like the streak of sky blue trailing down a navy jacket or an architectural flourish. Buckles, ripples and ruffles elevated his womenswear. In fact, it had a fundamental dressiness that tipped it towards demi-couture. And the formalism of the menswear (look back at Armani’s spring collection by way of raging contrast) also felt like a very clear statement about where the designer sees fashion as we head into the third decade of the 21st century. Security in tradition, in the familiar. In that light, the blue was scarcely rhapsodic. But it was reassuring.