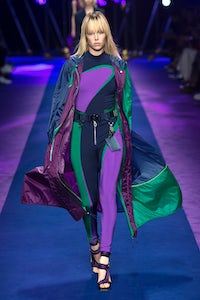 MILAN, Italy — Donatella Versace couldn’t have wished for a better vision of female empowerment than Serena Williams, front row and centre at her show on Friday night. The champ’s presence also underscored the sporty essence of the collection that was paraded in front of her.

“Sportswear is the future of fashion,” Donatella announced before the show. Sure enough, there was something that might constitute a nylon track suit on the Versace catwalk. Plus billowing nylon parkas, drawstrings, racing checks, bared midriffs, snap closings that opened for maximum movement. And a palette — purple, green, pale blue, maroon — that was all about the colours of your favourite team, Girls United.

On the soundtrack, DJ Violet intoned “Take the leap.” It was intended as an exhortation (Violet’s music has played a huge part in Donatella’s re-Versacification) but it also played as a reminder that the transfiguration of the house stems from the work that its designer has done on herself. Every hard-won shard of self-confidence was out there on the runway.

If it wasn’t exactly the Seven Ages of Versace we were watching, there was at least a reunion of some of the house’s Hall of Famers, including Naomi Campbell, Carmen Kass, Mariacarla Boscono and Doutzen Kroes. The body-conscious metal mesh that has been a longtime house signature was here reconfigured in crystal, airier, more modern.

Likewise Versace’s classic silks, now offered in Japanese nylon. “More expensive,” Donatella acknowledged ruefully, as she ruched it with drawstrings into second-skin tops and hipslung skirts. The casualness of that gesture was an appetiser for a group of outfits trimmed with techno-lace, rough-edged, imprecise. Nice.

Donatella has lost her appetite for the red carpet, so there wasn’t much eveningwear. Gigi Hadid closed the show in a navy nylon parka, sleeves in crystal mesh, underpinnings a sinuous curve of buckled crepe. Ah yes, that curve, almost Bond Girl in its insistent undermining of propriety. The most memorable outfit in the show might well have been the plain black pantsuit sported by Issa Lish, bifurcated by a single, subtle strand of purple.