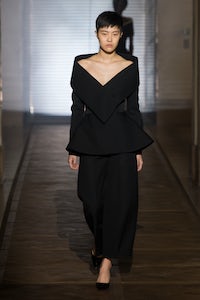 PARIS, France — There was something mildly breathtaking about Clare Waight Keller’s couture debut at Givenchy on Tuesday night, especially after her iffy pret-a-porter collection in October. It was like finding out your kid sister is Maria Callas’s match when it comes to singing. Obviously I’m not Clare’s brother, but the bits I’ve liked most about her checkered career to date have been the folky, boho things. So now she comes up with this intense, structured Gothic drama, in a cavernous, shadowy salon streaked with moonlight, throbbing with the rich melancholy of "November" of Max Richter, God’s gift to fashion show soundtrackists. Helloooo!

Waight Keller’s collection was a dialogue between darkness and light, between past, present and, I guess, future. Think about her predecessors in the job: Tisci, McQueen, Galliano, and Hubert de Givenchy himself. It was his structure and graphicism that most stood out for her when she delved into the archives. They were obvious in the show, in fichus, capelets, nipped waists. And maybe there was a hint of Audrey Hepburn, the house’s inviolable icon, in the models’ gamine wigs. But Waight Keller also seemed to honour Tisci with the Gothic decoration, the ragged lace, the fringes of jet beading, the feather trim on a coat gradually turning blood red.

And then there were her own enthusiastic explorations of the candystore whose keys she’s been handed. One of the standouts was a dress that fell away into multicoloured ombré-ed tiers. The specialist dying techniques – and the colour saturation they afforded – left her gobsmacked. The creation of the collection’s rigorous silhouettes – mouldings, tulles, interlinings – also thrilled her. And can we talk about the latex? A pink skirt, a butterscotch trench, another in cobalt for men (there was menswear - that you could question) cut from quivering rubbery translucence. Because, said Waight Keller, it looked different in the dark.

There is definitely a poetry in latex. That’s what the designer wanted. Poetry and beauty. “An open book,” she called it. Her invitation actually arrived in the form of a book. Maybe that had something to do with the show venue, the Archives Nationales, except it was filled with blank pages of black paper. It would take effort to write in such a thing, and that felt somehow like a comment on the challenges that face Waight Keller. But she is clearly comfortable with the element of surprise.