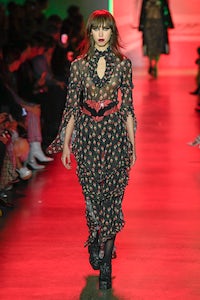 NEW YORK, United States — Anna Sui described her spring collection as “prissy and pastel and sweet” but darkness got the better of her for winter — and the clothes were all the better for it. She insisted she’s not wild about horror movies, but, in the name of research, she submerged herself in Italian giallo like Mario Bava’s Blood and Black lace, and classic Hammer productions such as Countess Dracula, and the eerie Daughters of Darkness, with avant-garde French beauty Delphine Seyring playing an elegant vampire. The lurid posters for these movies — blood red, pitch black, lurid greens and yellows — were all over Sui’s moodboard, alongside equally outré Guy Bourdin and Serge Lutens ad campaigns from the early ’70s, and even a Vogue cover of a veiled Bianca Jagger, heavy-lidded, red-lipped, coming in for the kill.

It was not the first time Gothic glam has been Sui’s go-to, but she was prepared to consider the idea that, on this occasion, it might be a subliminal reflection of her sense of the planet right now, a place of darkness and danger and crippling uncertainty. Her challenge was the same as usual however: how to spin all that input into her world, “to make it beautiful and seductive”, as she put it.

But in her world, those ideas took on a different, twisted life. Seduction was all about the allure of the strange. The Sui girl was Vampira, or the Black Dahlia, or a nubile young woman fleeing from the unwanted attention of a sapphic bloodsucker. Garren’s hair, Pat McGrath’s makeup, James Coviello’s hats were exaggerated, cinematic. Fred Sanchez’s soundtrack tinkled and swelled with classic horror soundtrack tropes (best of all, Yann Tiersen’s Waltz of the Monsters).

It’s an enduring mystery that more people don’t find the whole Sui package an object of desire. The charm and humour that illuminate her work were in full effect on Monday night (John Fluevog reactivated his cartoon-ish Munster heels specially for her) but there was also a rich seam of sultry slink. Everything was long (except when it was black pleather rah-rah shorts). Sui actually called her elongated outerwear “maxi-coats” and emphasised the proportion by pairing them with “hot-pants”, and once she’d banged that early-’70s gong, the rest of the collection fell into place as a dark, decadent romp, swaddled in sparkly capes, enthusiastically striding forth on embroidered platforms. But where Sui’s skill as a stylist shines is that she has always been able to translate the innate theatricality of her fashion scenarios onto the street. Break down her lavishly layered looks and you’d likely find a single, fearless piece for all seasons, like the black crepe sack dress sported by Adut Akech. Its sleeves were cuffed in a sick chartreuse. It was gorgeous.