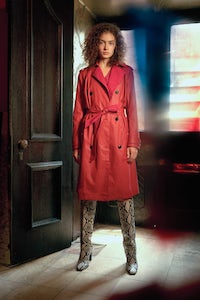 NEW YORK, United States — Marcus Wainwright, the founder and chief creative officer of Rag & Bone, became its CEO in 2016 when his co-founder, David Neville, departed to pursue other projects. He made a lot of changes over the course of those two years: he turned his back on runway shows, played with the delivery cycle and restructured the business to focus more on direct channels.

A month ago, though, he announced that design would once again be his primary focus. Stefanie Strack, a veteran of Nike who most recently worked on the sportswear giant’s direct-to-consumer strategy, is Rag & Bone’s new chief executive. Her first day is September 10.

Wainwright says he’s happy with the change; creative is what he’s good at. But he won’t stop having opinions about where the brand needs to go beyond the clothes. The fashion calendar is still “ass backwards,” he says. “No one thinks that the current system works.”

For Spring/Summer 2019, the company moved its buying window up to July, which means wholesale partners have already placed their orders on the products you’ll see in stores next year. Sales of dresses, Wainwright says, were a certifiable hit: up 300 percent from a year earlier.

Runway shows may be a thing of the past for Rag & Bone, but Wainwright must continue to tell a story that explains why consumers should buy his clothes over others. What makes them special?

This spring, he’s serving up the requisite florals — a buyer favourite — but also the things that make Rag & Bone, well, Rag & Bone: regimental details, British tailoring references and notes of American workwear. There’s always been a sporty element, too, that doesn’t feel like it’s playing too hard to the streetwear trend.

But yes, it’s standard fare. Season to season, Wainwright can sound “a bit like Groundhog Day,” he admitted. But he’s fine with that, as long as the customer grasps what the brand stands for. A shaggy mohair striped sweater and a patchwork camouflage suede trucker jacket benefited in particular from a nuanced, unordinary colour palette that made good use of aggressive, hard-to-pull off hues like orange.

The clothes aren’t spectacular. But they feel relevant enough and have an identifiable brand signature, which is a notable feat, especially in the contemporary market in which the brand competes. With Wainwright’s attention back on creative, here’s to hoping he pushes himself and his team further next season.

Marcus Wainwright on Rag & Bone Going at it Alone