A Web of Perverse Enchantment at Gucci

Alessandro Michele’s signal achievement is this: predictability doesn’t obviate pleasurability. In fact, part of the pleasure of a Gucci show is watching the way he warps the by-now familiar tropes. 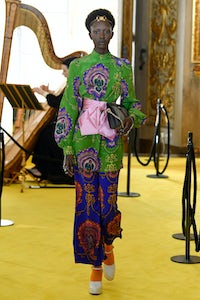 A Web of Perverse Enchantment at Gucci

Alessandro Michele’s signal achievement is this: predictability doesn’t obviate pleasurability. In fact, part of the pleasure of a Gucci show is watching the way he warps the by-now familiar tropes.

FLORENCE, Italy — Maybe it’s because the present is so discombobulating that antiquity is enjoying such a moment in pop culture. In the past few months, we’ve seen Damien Hirst’s drowned world in Venice, art world sensation Mark Bradford’s American pavilion at the same city’s Biennale, Karl Lagerfeld’s salute to classical Greece at Chanel, Neil Gaiman’s "American Gods" all over television, and his Norse gods all over bookshops.

Alessandro Michele was all hepped up to join them. “It’s not possible to think about culture without Greece and Rome,” he said. He wanted to book the Acropolis as the venue for his Gucci resort show. His experience with Westminster Abbey taught him the valuable lesson that if you don’t ask, you don’t get. But this time, when Gucci asked, it didn’t get.

So, on to Plan B. “What was the next most powerful place for inspiration?” Michele mused.

“The Renaissance!” Heartland of the Renaissance was Florence, also Gucci’s birthplace. Which is why the show came together like a charm. The designer claimed he was thinking about parallels between centres of power and progress, past and present, Florence then, Silicon Valley now (though he actually said Napa, which works equally with wine the way Silicon works with technology).

The presentation took place in the Palazzo Pitti’s Palatine Gallery, whose 500-plus paintings are a particularly concentrated celebration of Renaissance art. Outside the windows were the breathtaking Boboli Gardens, created in the late 16th century (Gucci is contributing €2 million to their restoration and improvement). Inside, the audience sat on stools, each embroidered with words from "A Song to Bacchus," penned in the late 15th century by Lorenzo de Medici, the single most powerful individual in the Renaissance. “Nothing’s sure about tomorrow,” reads the poem. “There’s no defence from love.” They might as well be lines lifted straight from Alessandro Michele’s Gucci songbook. And his spectral boys and girls, with diadems circling their heads, or golden laurel wreaths clutched in their hands, personified the transience of beauty.

In that "live and love for today" vein, Michele's latest collection was his usual ungendered, desexed crazy quilt of fleeting delights. Art nouveau met cowboy fringing. Athleticwear was mutated by fabrics like silk satin and gold lurex. Butch blanket check lush with embroidered dragons; a gold-sequinned cape trimmed in mink; chambray jeans, their labels a huge lolling tongue printed with waist size; silky pyjamas! – you could imagine any of these worming their way into wardrobes of all shapes and sizes soon enough. There was also the occasional clanger, too cute for its own good. A sweater with a teddybear motif tagged GUCCY lingers unlovingly in the memory.

But Michele’s signal achievement is this: predictability doesn’t obviate pleasurability. In fact, part of the pleasure of a Gucci show is watching the way he warps the by-now familiar tropes. What will this season’s spirit animal be? (The wolf). What snappy/obscure catchphrases will Michele employ? (GUCCIFY YOURSELF might have been his take on "Crucify Yourself" which Tori Amos performed at the Gucci after-party in February.) How will the glamour of old Hollywood insinuate itself into the collection this time? (Those sweeping gowns and turbans lifted from Norma Desmond’s closet brought a necrophiliac but curiously seductive whiff of "Sunset Boulevard" to Michele’s catwalk.)

Michele has ensnared Gucci in a web of perverse enchantment. Just how perverse crystallised when I checked into my hotel room in Florence on Monday afternoon. The show invitation was a linen baseball cap, packed in a shoebox emblazoned with the words URTICA FEROX. It’s a plant found only in New Zealand, a tree nettle whose spines have a sting that, in sufficient amounts, can kill a small dog. The Maori people used it as a medicine. The toxin itself is called triffydin. I thrilled when I read this. Triffids! At Gucci!

It was urtica ferox’s rarity, but also the idea of a substance that could be both poison and remedy, that appealed to Michele. But did he know how the Maoris used urtica ferox? They treated venereal disease with it. From day one, Michele’s Gucci has been “Blind for Love”. Do you think he might be acknowledging that such a condition has consequences that aren’t always pleasurable?

Disclosure: Tim Blanks travelled to Florence as a guest of Gucci.