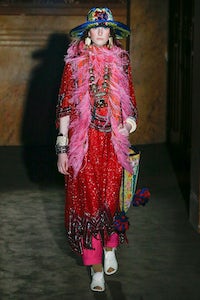 PARIS, France — Alessandro Michele’s Spring 2019 show for Gucci at Le Palace Theatre in Paris on Monday night concluded his “French trilogy," following a pre-fall ad campaign based on the Paris riots of 1968 and a resort collection presented in Arles in June. He didn’t want to show anywhere grand like the Louvre. Instead, Le Palace, with its long history of theatrical experimentation and notorious club nights symbolized a different scene “where more ordinary things happened, where you came to meet a new love, or experience never-ending nights.”

But there’s never been anything ordinary about Michele’s Gucci. He pulled off a literal showstopper on Monday when, halfway through, the presentation came to a halt and the Anglo-French legend Jane Birkin rose from her seat. Someone handed her a mike and she proceeded to sing “Baby Alone in Babylone," music by Brahms, words by her late ex Serge Gainsbourg, who is a secular deity in France. Imagine Joni Mitchell standing up in the middle of a Calvin Klein show and breaking out in song. “In life, we have breaks,” was the unassuming way Michele described this coup. “I tried to introduce the flow of life.”

High concept? Quintessential Michele. There is no other designer who embraces huge, difficult ideas in his work with such enthusiasm. He opened his show with a film from the 70s by Italian theatre avant-gardists Leo de Berardinis and Perla Peragallo, a grating, eerie indie that echoed everything from the saturated colours of Kenneth Anger’s celluloid scandals to the weird, static horror of “Ringu.”

It’s interesting to consider Michele as the avatar of a revived underground. “Giving order to disorder, disorder to order” is how he defines his mission statement. He amplifies chaos, aestheticizes it and ultimately anaesthetizes it. And all of that through clothes. That’s why he got such a buzz from showing in Le Palace, a faded old place of performance where he could prove the communicative power of costume (i.e. fashion) in a show where no words were spoken (bar Mme. Birkin’s song). I can imagine there were many people in the front-facing audience who didn’t really get to see much more than the models grouping on the stage after their cursory troupe through the auditorium. But perhaps the cumulative impact of their massed presence – all 84 of them — made up for that. They were a surreal living tapestry.

For that, you can credit Michele’s focus on colour in this collection. He called it “the central idea.” That might account for the colour blocking that made graphic points throughout the show. He also said he was obsessed with tailoring. The men's suits made me think of James Righton, the British musician who, with Nick Cave, embodies the accessible side of the Michele entourage, more sober than Jared Leto’s inclination to extravagance.

Continuing in the musical vein (which is where he feels almost more at home than fashion), Michele opened the show with a Janis Joplin boho, big hat on her head and later, paraded Dolly Parton in what would have passed for Dollyworld merchandising in a different context. This highlighted the fact that Michele often walks an achingly thin line between fashion and kitsch. In the same way, models carrying feathered showgirl fans and someone toting a Mickey Mouse handbag, fresh out of Disneyland, make you wonder if he ever says no to anything. But he knows as much, and his self-awareness artfully defuses the situation. Michele’s making a new world here, and new worlds need everything to build with and from. He talked about the sirens wailing in the street outside, the real world. Inside, it was Maria Callas singing — and Jane Birkin. "Here, time stops."

That’s why it seems pointless to suggest that the profligacy of this collection was a retread of what we’ve already seen. Michele thrives on a kind of timeless overload. But it was telling to see echoes of Issey Miyake and Roberto Capucci here, both of them masters of ultra-disciplined pure form, not to mention technical accomplishment. There will always be surprises in store from Alessandro Michele, but I think we can expect the really unexpected.