Pierpaolo Piccioli's insistence on diversity and inclusivity has brought couture down to earth at the same time as he has sent it soaring to heaven. 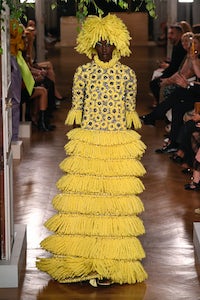 Pierpaolo Piccioli's insistence on diversity and inclusivity has brought couture down to earth at the same time as he has sent it soaring to heaven.

PARIS, France — Pierpaolo Piccioli nurses a fantasy of a world where people live unbound by borders, free to express themselves. One of his inspirations for this Utopia is Irving Penn’s “Worlds in a Small Room,” the photographer’s 1974 celebration of cultural diversity. “It’s not about a geographical situation but about humans,” Piccioli reflected before his show on Wednesday. “And haute couture is a lot about the human too.” An hour later, he rammed that point home when he took his post-show bow surrounded by the white-coat-clad artisans who brought his designs to life. Piccioli named each look after the men and women who worked on them in the Valentino atelier. Look 66, for instance: “Sabina, Caterina, Tiziana, Federica P.” described as a bonbon rose gauze dress, ton-sur-ton dégradé braids. “Even the most expensive fabrics are just bits of cloth,” said Piccioli. “They can’t be compared with the human endeavour.” Again underlining his point, the show notes enumerated the 2,010 hours of handwork it took to create the dress.

But we kind of know that already. Extravagant demands on human time, creativity and ingenuity are part of the myth of couture. What we can never quite prepare ourselves for, however, is when we’re confronted by it in full magnificent flower, when everything we know buckles in the face of transcendent beauty. Maybe that used to happen often in the Golden Age, when Balenciaga and Dior could make people weep. Now tears are exceedingly rare in fashion (except, perhaps, for the bitter ones shed behind closed doors). But since Piccioli found his couture mojo in his collection for Spring 2018, he has been eliciting those old-time emotional responses. Wednesday’s walkout brought the audience to its feet for a thundering ovation that lasted at least as long as it took the dozens of models and craftspeople to wend their way through the gilded salons and garden of the Hotel Salomon de Rothschild. And there were tears aplenty, including those dabbed from the cheek of the grand old man himself, Valentino Garavani, front row centre with Giancarlo Giammetti, Gwyneth Paltrow, Naomi Campbell and Celine Dion (more waterworks).

Standing in front of his mood boards earlier — always the intriguing juxtapositions, like the Penn photos next to fashion legend Diana Vreeland and Renaissance Madonnas — Piccioli had emphasised that they were his own starting point. “Your point is the one you see on the runway,” he said. He insisted that the story he was telling had as many meanings as there were people in the audience. “All different, all valid.” The essence of couture is the one-of-a-kind, but Piccioli has intensified the notion of the individual. “For me, extravagance means the maximum effect of self-expression,” he explained. “Not showing off, being true to oneself. Every look in this show is an individual, but they make sense all together, like embracing different cultures.” Piccioli’s imagined Utopia may be untrammelled idealism, but his insistence on diversity and inclusivity has brought couture down to earth at the same time as he has sent it soaring to heaven.

There was a strong sense of that fantasy/reality spectrum in his new collection: capes of imaginary landscapes gorgeously collaged from velvet, taffeta and lamé shared the runway with the relative restraint of a pink cashmere coat over citron wool pants. Lauren Hutton, icon of 1970s Americana, modelled a parka and a simple shift tied at the waist. Adut Akech, the Sudanese-born model who is the new face of Valentino, closed the show swathed in a massive nimbus of purple organza. Radically different worlds, but united by Piccioli. His notes referred to “the opulence of diversity.” His show brought that idea to extraordinarily vivid life.

"Inclusivity is a creative as well as human act," he'd said earlier. He was keen that we experience his collection in its totality, resist the temptation to break it down into its fabulous components. Take our cue from Piccioli himself: instinct, not analysis. So, on Wednesday night, it was ours not to reason why, ours just to sit back and surrender to his haute humanism. And that’s exactly what we did.