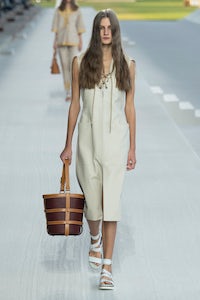 PARIS, France —Do we still need collections based on a theme, developed accordingly in full detail? The method sounds old school and maybe even a little pedantic, but it can actually work. Nadège Vanhee-Cybulski based her latest Hermès collection — staged en plein air against a mirrored backdrop reflecting the sky in the vastness of a hippodrome on the outskirts of Paris — on the merging of two seemingly opposite inspirations: the naval and the equestrian. Or, to put it in the playful lingo of the show notes: Sailor Sellier.

It was quite a journey, but one that translated into the designer’s most focused and strongest outing for the revered French house. The line-up of pieces had a clear outdoors-y feel: anoraks, firm skirts that came accessorized with sturdy sandals and enough rope for the sails of a transatlantic ship from another era. Everything came in the supple, hyper-luxe leathers Hermès is known for, and in a palette of muted, natural hues. So far so good. The only problem was the references risked reducing Hermès to something a little too narrowly healthy and sporty, especially so at a time when fashion is moving out of sportswear into more formal territories.