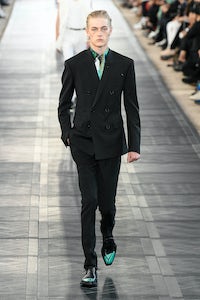 PARIS, France — At the Karl Forever memorial on Thursday night in Paris, one of the many eulogists mentioned Lagerfeld’s decisiveness, his ability to not overthink things.

Berluti designer Kris Van Assche, who arrived at the LVMH-owned label just two seasons ago after years safeguarding Dior Homme for many years, might benefit from following in his stead.

Van Assche is still working out what Berluti should mean as a fashion brand. For most of its 124-year history, it was a men’s cobbler, bought by LVMH in the early 1990s. In 2012, the group acquired Parisian tailor Arnys, fusing the two so that Berluti could properly launch men’s ready-to-wear. Since then, it has passed through the hands of designer Alessandro Sartori, Haider Ackermann and now Van Assche, whose idea for the label is to take its very traditional black-and-white codes and make them Technicolor.

The collection, heavy on brights, evoked zoot-suit look of Dick Tracy at certain moments. Van Assche put plenty of thought and study into every inch: nail-head details were a punk’s ode to shoemaking; split hems were taped on the edges with handwritten words lifted from a 19th-century manuscript from the Berluti archive.

Those same scribbles also appeared embossed onto murses and even a leather blazer, the worn patina fashioned after the stained surfaces of the marble tables where the brand’s craftsman hand-dye its shoes.

The problem, however, is that sometimes too much thought makes things feel weighed down, not full of new life. The fit, the shapes, the treatments were just too much altogether.

What was perhaps most befuddling about the collection, though, was the tremendous amount of women’s clothes that walked the runway. Lots of suiting often dotted with single feathers; sort of his-and-hers ensembles.

“It’s a man’s brand, there is no doubt, but it’s also nice to play with seduction, to make this Berluti man more sexy than the one I was working on before. This is definitely more, grownup, more sexy. It’s about seduction and beauty,” Van Assche said when asked backstage why he showed so many women’s looks. “I like to think there’s a strong woman behind a man.”

Perhaps he was not expecting the question and drew upon a cliché without considering how it might be interpreted. But that thinking just doesn’t feel modern, just as the collection itself was not a very modern way to wear clothes. In order to better clarify the new Berluti, Van Assche may need to trust his instincts a bit more.