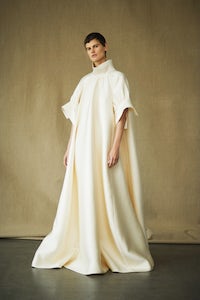 NEW YORK, United States — The Row recently launched menswear with a serious press push, so instead of a runway show or presentation for their women's offering, Ashley and Mary-Kate Olsen opted instead to invite industry insiders to their New York showroom to survey the clothes on mannequins and racks.

At times, this less-is-more approach is frustrating. The designers communicate sparingly, giving away very little — no show notes and few, if any, backstage interviews — so seeing the clothes on living bodies reveals something that static garments cannot.

And yet, you have to hand it to them. By being conservative with their words and images, onlookers have to really think hard about what it all means and why.

Case in point: because they did not shoot imagery for their debut men’s line, prospective consumers have no visual reference to go by: only the clothes. Also consider their advertisement in the September issue of Vogue: two white pages imprinted only with their logo. Magnificently effective.

But what to say about Spring? To this observer, it was a thorough study of volume, opacity and a rumination on the necessity of clothes. Several workwear-inspired garments were layered with a purpose, rather than for the sake of piling things upon each other. It was humble, but at the same time quite regal. A good way to describe The Row.