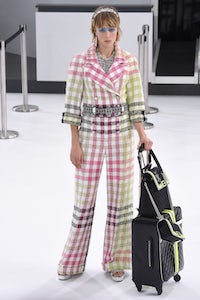 PARIS, France — “It’s very pleasant to wear gloves,” said Karl Lagerfeld during a preview of Chanel’s Spring collection the other day. He loves gloves. He’s never without them. And he was very excited by the silicon trim on the gloves he was about to show. It had to be sized so exactingly that a micro-millimetre out would make them useless. That’s the kind of challenge he sets himself as a designer — to keep himself engaged. No one else would even notice.

Lagerfeld is like that: exacting. His innately aristocratic outlook on life loans him a fascination with how the other 99 percent lives. The supermarket, the brasserie and the casino have provided backdrops for recent Chanel shows. On Tuesday, it was the turn of the airport. Lagerfeld only flies private, of course. His favourite airport is Le Bourget, the airstrip near Paris where those who fly private take off. “But air travel is a part of life, and I want to make it more perfect than it is,” he offered as justification for another gigantic Chanel spectacle.

It was chillingly accurate, in that it captured the sterile vastness of airports we have known and loathed. What was missing was the thronging hordes of travellers. They were contained in the bleachers. Lagerfeld did his best to make up a crowd with his usual dozens of models.  The advantage of showing a collection as huge as he does is that he can cover every base: the ingénue in her sweatshirt, miniskirt, sandals and backward baseball cap, a grandmother in her classic tweed suit. Except that the suit was another of Lagerfeld’s little challenges. “No buttons, no braid, no pockets, no golden chain, not one element of Chanel,” he said. “Nothing is going on, and a lot is going on. No idea is still a good idea.” He was delighted by such a thought. And the starkness of the result was particularly successful when there were other things on the catwalk which didn’t seem like a good idea, like an outfit in ruffled pink paper leather. That’s the disadvantage of showing a collection so huge. More opportunities to get it wrong.

So, much like any airport, there was a lot of noise you had to block out with this collection. Lagerfeld’s main proposal – a flowing skirt over pants – may prove divisive, but it had a casual easiness that looked light as air. In other words, an outfit you could fly away in. 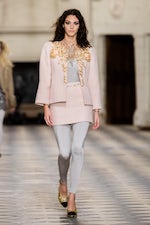 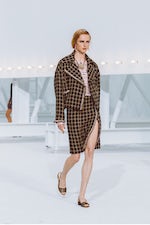