A Wave of Chinese Talent on European Runways

China has nurtured a crop of young designers who have begun to establish themselves in the major fashion capitals of Europe.

A Wave of Chinese Talent on European Runways

China has nurtured a crop of young designers who have begun to establish themselves in the major fashion capitals of Europe.

MILAN, Italy — The European catwalks remain the world’s most prestigious showcase for fashion designers, so it comes as no surprise that mainland China, with its spectacular demand for European luxury imports, has nurtured a crop of young designers who have begun to establish themselves in the continent's major fashion capitals.

They approach their craft with vastly different viewpoints, aligning less with each other than with existing schools of fashion thought. Some, like Yang Li or Ryan Lo, for example, more or less avoid the label of being a 'Chinese' designer, preferring to leverage their British education and networks in London or Paris to build their businesses, though both have dabbled in integrating Chinese culture into their collections via graphics and craft.

The 48-year-old designer Guo Pei — who showed as a guest member of the Chambre Syndicale on the January couture calendar — is their polar opposite, her designs heavily laden with ornate inspirations from the courts of imperial China and that same gilded drama she applied to the canary yellow, flourished and fur-trimmed gown Rihanna wore to the Met Ball last year. 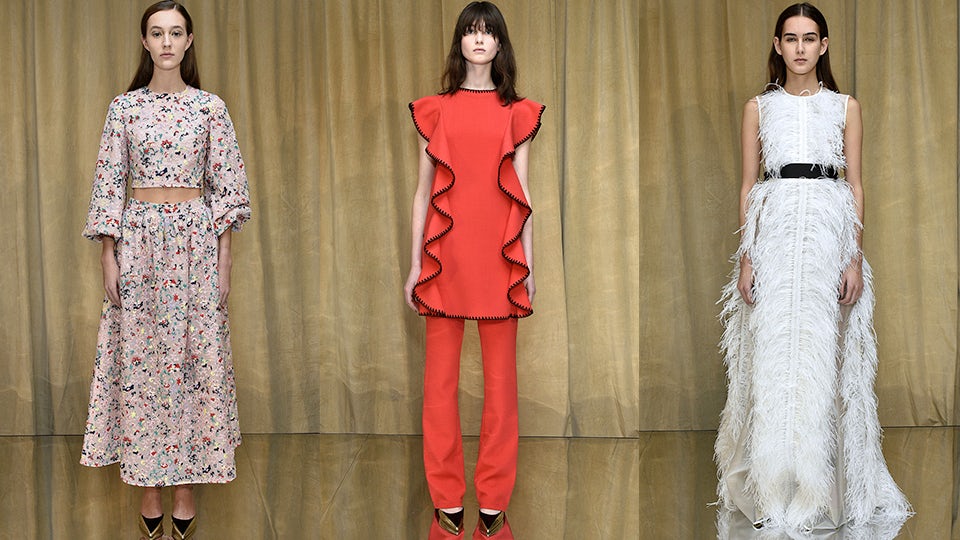 Gaining more traction in London this season, both Xiao Li and Huishan Zhang have filled telling gaps in the city's fashion calendar, following the closure of local labels like Jonathan Saunders, Richard Nicoll and Meadham Kirchhoff. Zhang has made considerable waves since his 2011 debut by tuning into the British capital's more ladylike persuasion and honing a demure silhouette that recognises his Chinese heritage by way of subtle Oriental embellishments, modest lengths and precious fabrics that reflect his time spent in the Paris ateliers of Christian Dior.

His clothes could easily sit alongside the likes of Giambattista Valli, Emilia Wickstead and Erdem (which they do in a growing number of retailers from Bergdorf Goodman to Browns) and his latest offering gave a sense that he is shaking off his earlier use of Chinese tropes in favour of a more universal view of femininity.

For Autumn/Winter 2016, Zhang likened certain floral silks to Chinese porcelain, a vague link which nevertheless mingled beautifully with his geometric collage effects. 1950’s couture shapes meant a cacophony of ruffles and flouncing organza, adding sculptural, girly overtones to flared blouses and tiered dresses in colourful jacquards. (Their impact overshadowed the diamond-patterned outerwear that lacked the frisson of the more floaty, layered designs.) His strung pearl belts were a glamorous addition, nodding to the demi-couture bent that should remain Zhang’s focus rather than the feathers and fur that closed the collection. 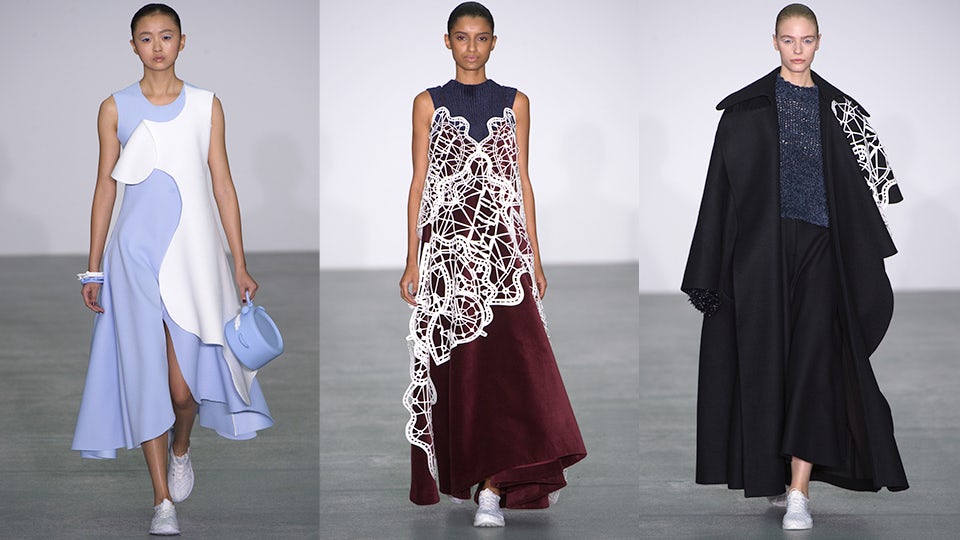 Xiao Li’s aspirations delve somewhat deeper into fashion’s conceptual gene pool, with her voluminous knitwear studies that create moments of plush texture and organic lines that cocoon the body. She employs feminine devices like the ruffle and the flounce, too. However, Li’s arrive so monumentally oversized that the context changes: instead, they become a giant scarf lapel on a sky blue, raw-edged jacket or fall down the front of a coat like petals of maroon velvet.

This season, Dalì’s surrealism informed the exaggerated wrapped and drooping forms of her shaggy chenille sweaters, asymmetric sleeves and trails of giant curly lace, yet posed questions about the viability of her clownish proportions in today’s marketplace. There are definite shadings of the Japanese designers to be found in these experimental shapes, yet in Li’s favour her colour sensibility reads as both fresh and unusual, spanning shades of palest peach and periwinkle blue to rusty pinks and moody navy. 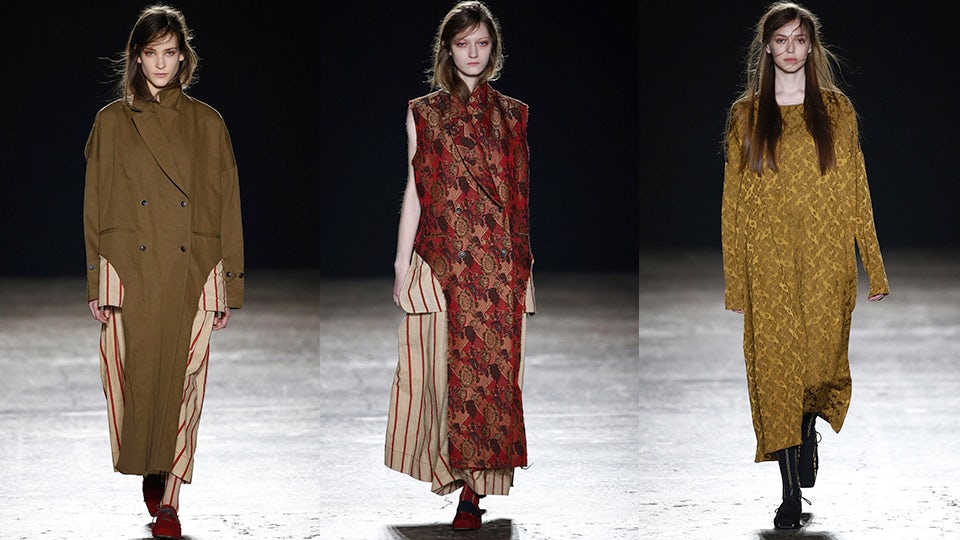 Uma Wang now shows in Milan (after testing the waters in both London and Paris), a fact that gels well with her exhaustive textile development in partnership with Italian factories. Championed by Chinese editors like Modern China Weekly’s Shaway Yeh, Wang has accrued significant stockists in both Italy and China in recent years and will form part of US retailer Opening Ceremony’s Chinese showcase for 2016.

In Milan, she is the only Chinese designer on the schedule, yet does not allow that fact to cloud her decidedly romantic point of view that swings towards a dusty, baroque feel of lived-in opulence; clothes attuned to palazzo living, if you will.

Unafraid of a historical reference or two, Wang’s Autumn 2016 outing delivered elements of masculine and feminine wardrobe exchange via post-WWI Europe, starting with the ominous soundtrack and continuing through the clash of military regalia and opulent brocade textiles on sack dresses, overcoats, and generously tailored suits. Wang paired matte and shine fabrics together in irregular panels to glorious effect (pinstripes on chinoiserie was a rousing combination) for a coherent collection punctuated by bold outerwear pieces each with their own dishevelled charm.

Her work, like that of Li and Zhang, proves that pigeonholing designers by race is risky business. Globalisation has levelled the playing field, a fact that is altering the collective value system embedded in clothing for the better — making quality and vision count all the more — no matter the name on the label.