LONDON, United Kingdom — London has always had energy. Whether regal or anarchist, channelling the independent spirit of David versus the financial might of Goliath in other cities has managed to produce designers that matter beyond the echo chamber of the industry. New York Fashion Week might be in a black hole, but London’s serotonin levels are also at an all-time low. You can blame the bong of Big Ben finally ringing in Brexit or a deeply unpopular prime minister (in fashion’s left-leaning circles, at least) if you like, or even the Storm Dennis that has blustered through the city (not great for street style). Though really it’s a dearth of new, exciting names, interesting presentations or agenda-setting brands on the London Fashion Week schedule.

Britannia has lost its cool. It’s an island that seems smaller, more myopic than the global trendsetter it once was. Just a few years ago, the narrative around London Fashion Week was a celebration of Britishness and business. Now, it’s cultural and aesthetic output is in a state of existential identity crisis, scratching its head in perplexity trying to figure out what it stands for and where it’s going. It’s not a great time to be patriotic in Britain, for fear that might be misconstrued as nationalistic. And then there was Extinction Rebellion’s funeral for fashion last September, which saw droves of eco protesters in mourning attire ominously carrying placards that read “RIP LFW 1983 – 2019.”

The fashion industry has become more global in its cultural output, so the world is demanding more from designers. Why look to London when there’s Lagos, Tbilisi or Copenhagen? Why bother flying in for the whole week if Burberry is only on one day? Does anyone even care what Alexa Chung is wearing on the front row?

The most important question is what that means for the designers who have dined out on that spunky spirit from the start. They have ostensibly fallen upon two options: to either broaden their horizons or introspectively retreat within. Some of the most interesting and commercially viable young designers in London have bypassed the week entirely — Asai (a best-selling brand at LN-CC), Supriya Lele (the best-selling womenswear label in the basement of Dover Street Market) and Chopova Lowena (a success story at MatchesFashion) are absent. For them, putting on a show twice a year doesn’t have the same cost-effective value as dropping a collection with their retailers or even having an intimate showroom in Paris, the city where even the taxi drivers pride themselves on knowing which day the Dior show is, and where all three are finalists in this year’s LVMH Prize. Last month, Craig Green decamped to the French capital to rapturous applause. He may not be the last.

Marques Almeida have struggled to sustain the Britannia cool on which they built their brand, inspired by their teenage copies of i-D and The Face and, as their show notes put it, an “obsession to understand what it means to be young in whatever present world we find ourselves in.” They cast their friends in their shows, which are often held at the Truman Brewery in the Shoreditch neighbourhood. Like their collection, the sense of rawness and creativity in the area has been replaced by chain cafés with the same menus day after day. Their collection was full of great clothes like painterly jacquard wide-leg trousers, ruffled taffeta dresses and ponyskin coats with exaggerated neon shearling collars, but we’ve seen them do so much of it time and time again: striped pyjamas, bright slip dresses, bell sleeves, marabou-trimmed handbags. Why now? Their casting is what grounds the clothes with organic diversity and reality. But there’s a fine line between the déjà vu of asserting a signature and the sartorial equivalent to Groundhog Day. 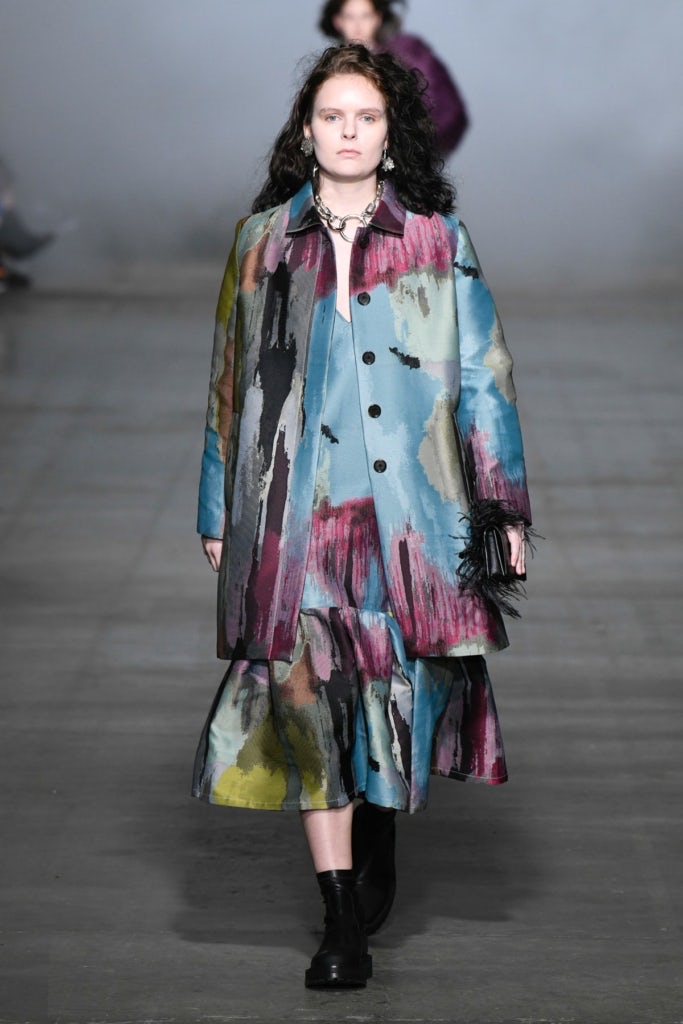 Besides, the currency of youth is often overrated. It grows old quickly, especially when the kids now beat to their own drum on TikTok and seem more preoccupied with either megabrand logos or not buying anything new at all. Billie Eilish in oversized Chanel tweed at the Oscars, the brand literally written out onto her gloves, is the ultimate indication that irony is still in vogue. It’s cool to care just enough to be able to pass as not caring. Few younger designers aspire to the previous model of catwalk fame, magazine spreads and department store sales — but it still remains the most formulaic way of building a business in London. Or at least being taken seriously. Whereas the path for a generation of British designers such as Simone Rocha, Erdem, Christopher Kane, Mary Katrantzou and Roksanda was clear: grown-up clients (read: luxury fabrics and prices) and their own brick-and-mortar boutiques, business is still on a substantially small scale compared to their heritage brand neighbours with fragrances and licensing deals. So you can only imagine just how hard it is for an even younger generation, even if they have devoted fan clubs in the industry.

At the Central Saint Martins MA show, once the place to find the next big thing, there’s no longer an element of discovery because so many of these designers are out there on Instagram, and sometimes their clothes on moving bodies in a show don’t quite match up to the interesting ways they can present them on social media. It’s a question of image versus imagination. Of course, there were plenty of fresh ideas floating about in the 21 collections on show, many of which are auditions for jobs at houses and innovative propositions for upcycling. But it will be interesting to see who will brave it on their own. 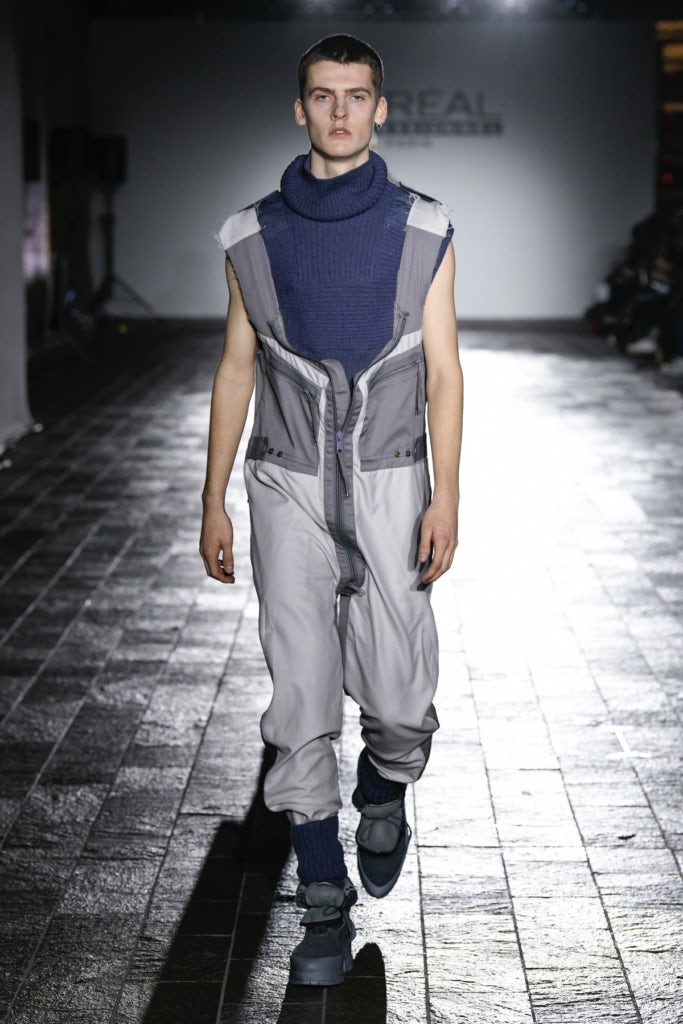 It’s not easy, even with the help of a platform like Fashion East, the non-profit incubator that has given the great and good a space to show for three seasons over the years. South Korean designer Goom Heo can testify. A year on from her own Central Saint Martins collection, her follow-up at Fashion East was harder to produce because of the shorter deadline and high cost of machines, and so the cartoonish quality of her last spliced-together collection was simplified into computer-like colours and video-game styling. She faces challenges ahead of her, but she’s got a fresh eye, so let’s hope she can rise to them. 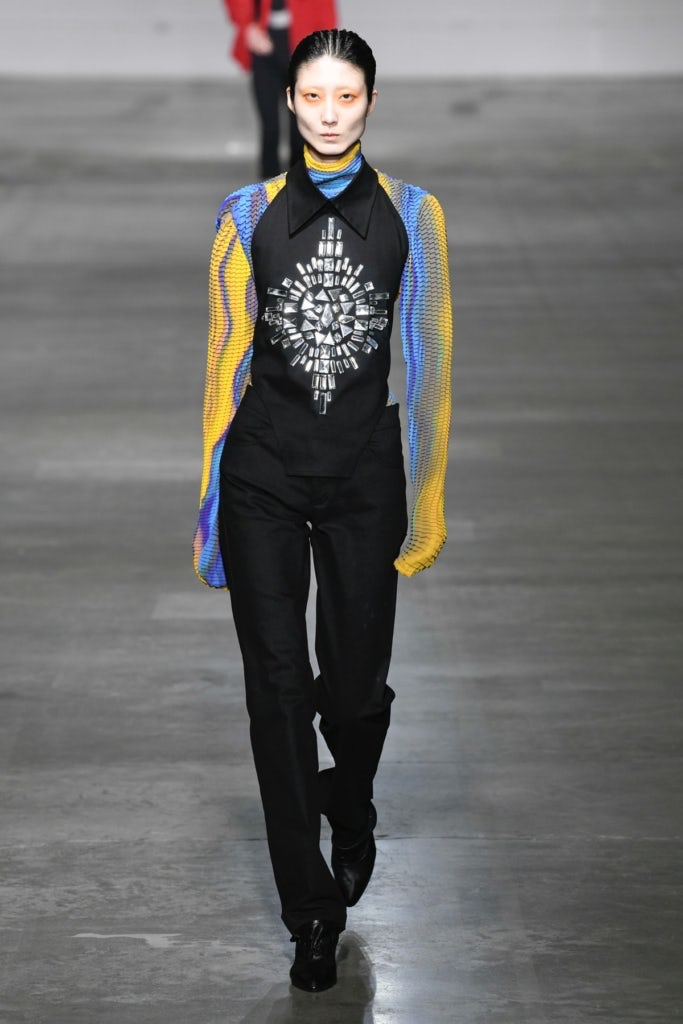 Gareth Wrighton showed his third and final collection with Fashion East, a tongue-in-cheek tableau of American mall rats in "Vote For Bush" sweaters and "The Simpsons" memorabilia and cheerleader garb as “commentary on our gluttonous consumption habits.” So the show was not really about establishing himself in a commercial sense, or even in a one-off couture kind of way, because there’s little demand for a sweater made of 344 used makeup wipes. His show was instead a portfolio for his art direction and skill as a storyteller. “By showing clothes in this way, I’ve done the very thing I set out not to do, and I want to confront that,” he added. In other words, fashion has become so unfashionable that even those who have barely started out in it are running for the hills.

But what about the grown-ups — the women who do care about off-kilter design and have enough of their own money to spend on it? They need clothes, too. Rejina Pyo is catering to them with contemporary-priced clothes that hit the sweet spot of easy-to-wear and namecheck-credible. Her show in a cavernous tunnel was full of real-life ideas: square-neck dresses with mismatched buttons and ever-so-slightly ballooned shoulders, great panelled overcoats in mocha-choco-latte hues, along with macro-pleated skirts and unfussy floral dresses. Ding, ding, ding. Her secret ingredient is not exaggerating anything too much, so it seems real. It was just a shame about the occasional whiff of what Daniel Lee is doing at Bottega Veneta. Of course, Lee doesn’t ‘own’ square toes, turquoise mules, leather trenches or cross-body bags, but given that ‘New Bottega’ has become such a phenomenon in recent months, it’s perhaps only natural for other designers to catch a scent of it in the air and mistake it for a flash of inspiration. That has happened for years — just look at Phoebe Philo’s Céline, itself a riff on fashion’s Type O, Helmut Lang. 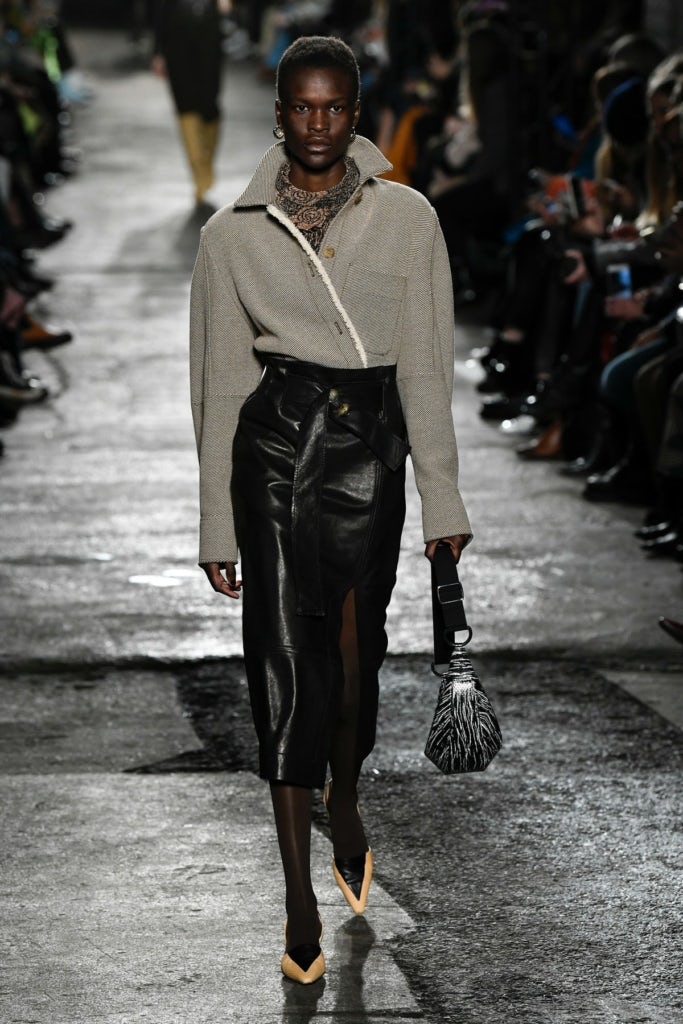 Hannah Weiland of Shrimps, on the other hand, has been building up a savvy business selling many of her dolly-like designs on her label’s Instagram. She understands the power of a simple product that captures the zeitgeist, like chubby faux fur coats or pearly top-handled handbags. Her collection nodded to the symbol of Britannia herself, The Queen. In lieu of all those prairie-style dresses and ruffles of smocking that have dominated prior seasons, there was a sense of late ‘70s /early ‘80s twee that could well be the next big Instagram-friendly trend: neat rows of pearls, Balmoral jodhpurs paired with bouclé jackets with not-mink trims — all very next season of The Crown. The Eighties seem to be the nostalgic high note of the season — we’ve seen Julia Biddle Henry-style bombe glacée bouffants at Marc Jacobs and Valentino haute couture — and, without stating the obvious, there are parallels in the political landscapes of then and now. Let’s see how well it translates to real life. 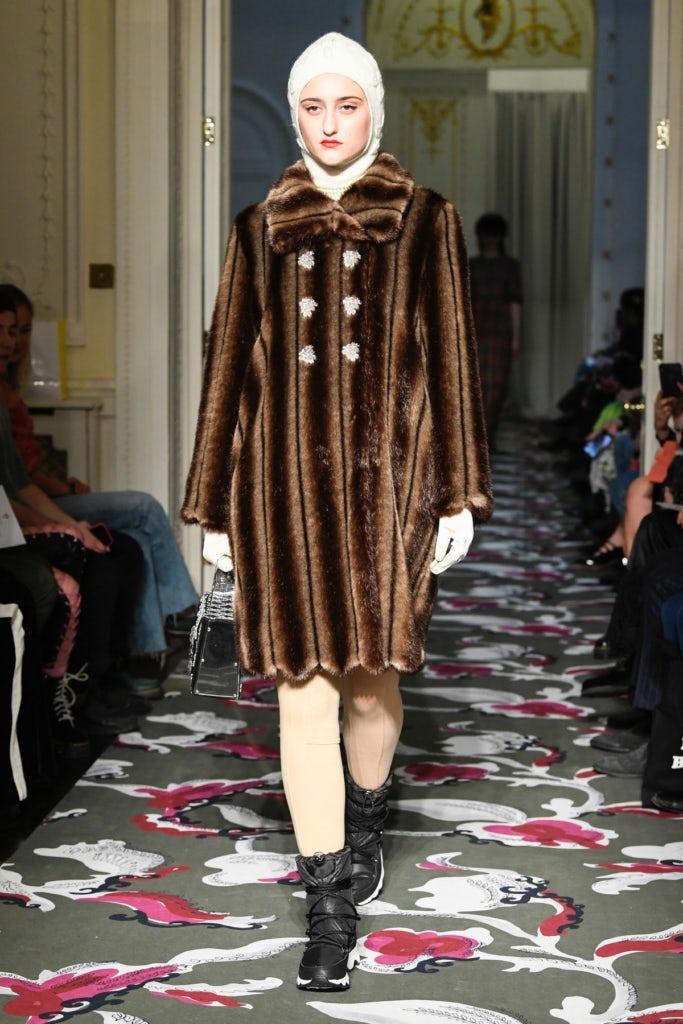 Michael Halpern, on the other hand, gives grown-up women and little girls a very old-fashioned dream: that they may one day get to go to the ball. To hell with real life. His collection was yet again an iteration on sparkle and sequins, Watteau-back gowns and sky-high heels. A Canadian tuxedo with decadently wide lapels and perfectly flared trousers was one of the most interesting looks in the show (or perhaps it was just a much-needed palette cleanser), but either way, it would have been great to see what kind of other un-sequined daywear Halpern has up his sleeve. What we got instead were gowns that proceeded to get bigger and heavier, beautiful fodder for Instagram and Billy Porter, who was at the show, but otherwise banal in the context of the big-gown moment that has trailed through fashion: The Valentino Effect. One of the models precariously wobbled in the vertiginous stilettos, so they came off with the help of some audience members. Sometimes a girl just wants to be comfortable, you know? 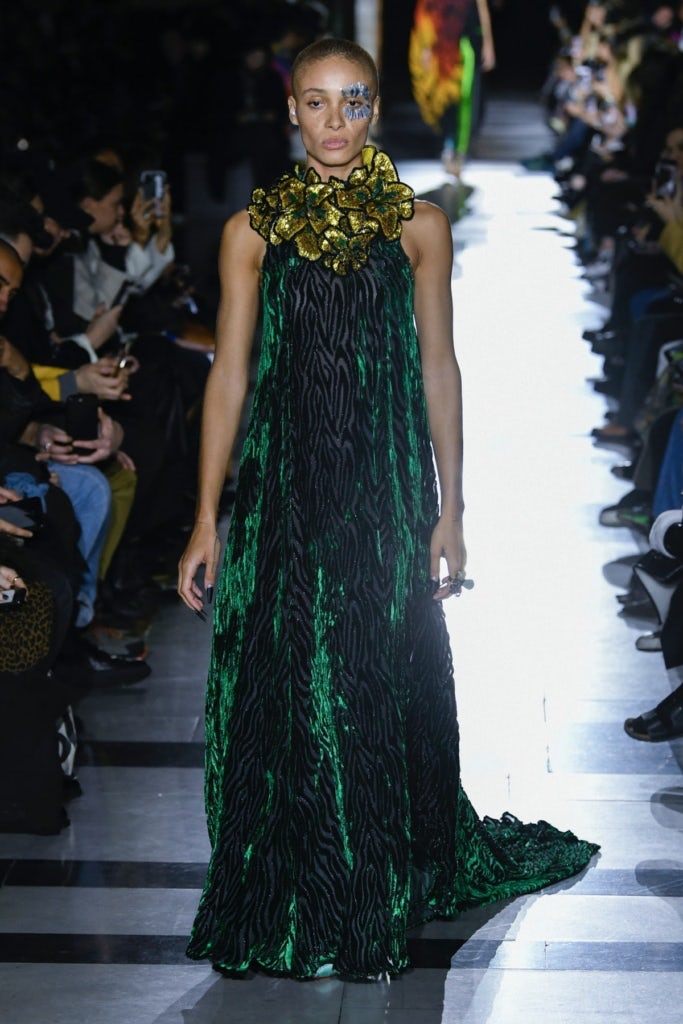 London was once the arbiter of ideas, so it’s a shame its fashion week has plateaued and ideas are in a state of repetition or confusion. It seems the B-word has sapped everyone’s energy — although there are exceptions like Matty Bovan and Molly Goddard, whose shows were brimming with the kind of madcap new ideas and joyously desirable clothes that ensure their own — and possibly the city’s future. Elsewhere, it doesn’t look like the next generation are interested in salvaging it. It may not be the end of empire just yet, but London’s once-imperial fashion kudos is slipping.