In Milan, Escaping the Sportswear Trap

Milan seems to have turned into sportswear fashion week — it's time to move on and test new grounds, writes Angelo Flaccavento.

In Milan, Escaping the Sportswear Trap

Milan seems to have turned into sportswear fashion week — it's time to move on and test new grounds, writes Angelo Flaccavento.

MILAN, Italy — The Milan men’s fashion week which closed yesterday was a blink-and-you-missed-it affair of sportswear, brights and comic strip prints. With the schedule becoming slimmer and slimmer, what was really a fashion weekend was filled with a host of newer names, signalling renewed interest in the next generation. Yet, the truth is not all of the new names genuinely deserve a show.

Italy’s fashion body, the Camera Nazionale della Moda Italiana, really needs to better curate its fashion weeks. But then again, shape-shifters are a rare breed, now more than ever before. In Milan, the young designers that did have something to say did not distance themselves too much from the broad-shouldered tailoring, playful oversized urban-wear, subculture-inflected streetwear that is the de facto shared language of the new, 1990s-obsessed generation. What was original was the point of view with which these prospective auteurs look at these shared tropes.

Loris Messina and Simone Rizzo have taken strides with Sunnei, as they keep growing with each collection, both in terms of style as well as manufacturing. This season, the duo delivered their most mature and comprehensive collection to date, including womenswear for the first time: a charmingly chaotic mix of graphic stripes, sporty shapes and off-kilter pragmatism that came charged with a distinctly Italian brand of playfulness.

Vincenzo Palazzo, the creative mind behind Vien, is a true talent. His idea of clashing exquisite tailoring with the kind of coarse roughness and vivid visual coding, usually associated with music subcultures such as punk or early hip hop, was a good intuition, though it still needs a bit of fine tuning. 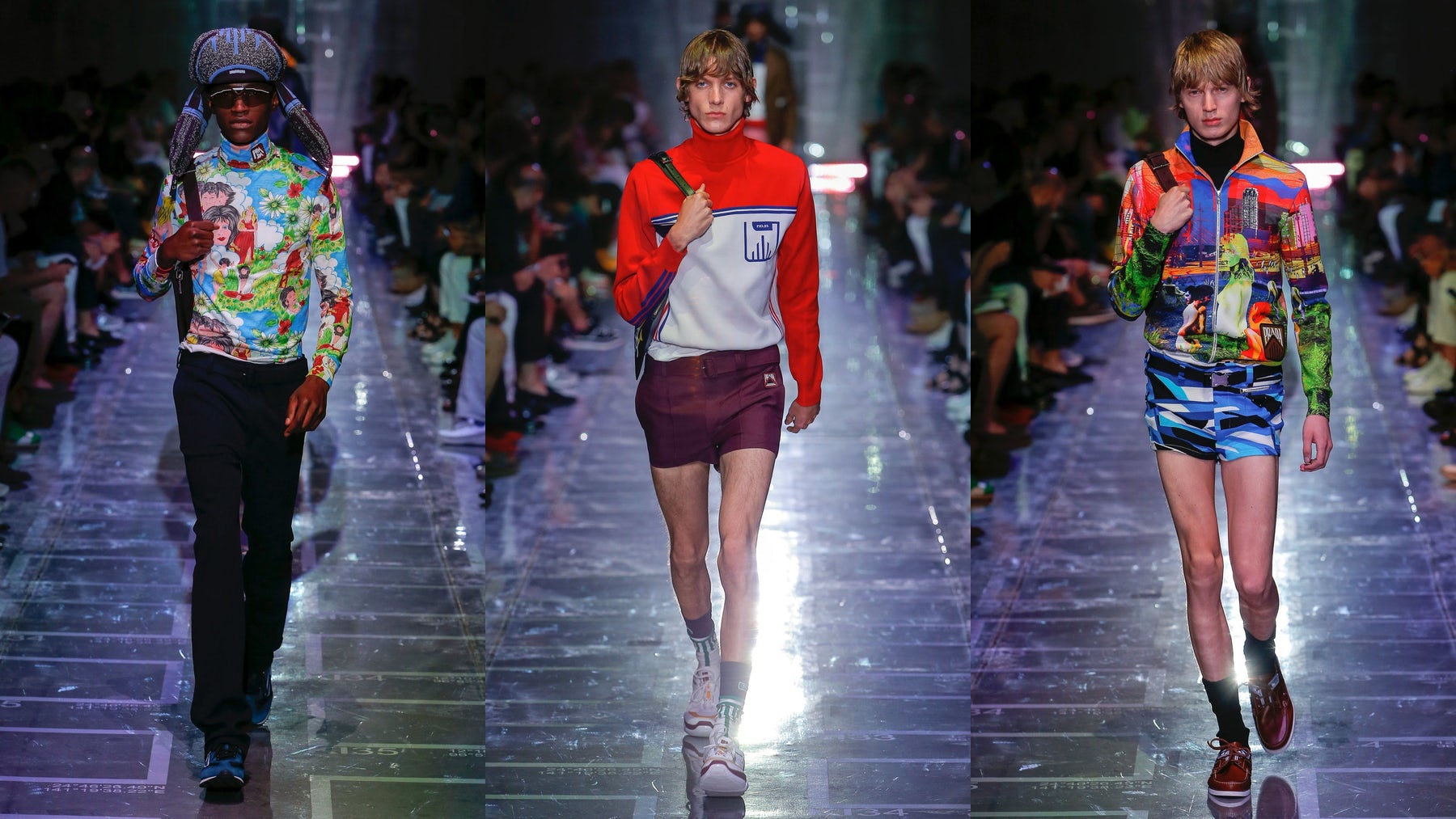 This was Vien's second proper show, so there's time to progress. Inspired by block parties, Masai and buffalo gals, it was strong on draping and impromptu pattern-cutting à la Vivienne Westwood, which was a gentle kind of homage. Stronger still were the Rei Kawakubo references, down to a crazy sculptural dress in the finale, and these were de trop. Being original means, at one point, having the guts to kill your idols.

Stefano Dorian Tarantini, the DJ and multidisciplinary maven behind M1992, is a designer of darker inclinations. What's fascinating about his work is his ability to mix cult and club-like references with a genuine appreciation for Italian fashion in its 1980s heyday. The dystopian fantasy he presented this season — a life-on-the-beach-looking-at-polluted-oceans affair of oil prints, industrial outerwear and aggressive corporate wear — featured some seriously bossy women's looks that winked at the best Giorgio Armani moments. It did not always work, needing a bit more thinking, but the clash of such opposites looked personal and, as such, valid.

Of a wholly different kind was Sartorial Monk, the project created by Sabato Russo, who is most certainly not a youngster, nor a new designer. It's just the label that's new, oozing the kind of sophisticated purism that made Italian fashion great.

Of course, Italy has always been known for delivering fashion that's all about the product, about items that can actually sell in the shop, which in fact is wonderful as well as pragmatic. In this sense, this season was openly and happily commercial: everybody from MSGM to No.21 offered catchy collections full of nice and easy pieces. 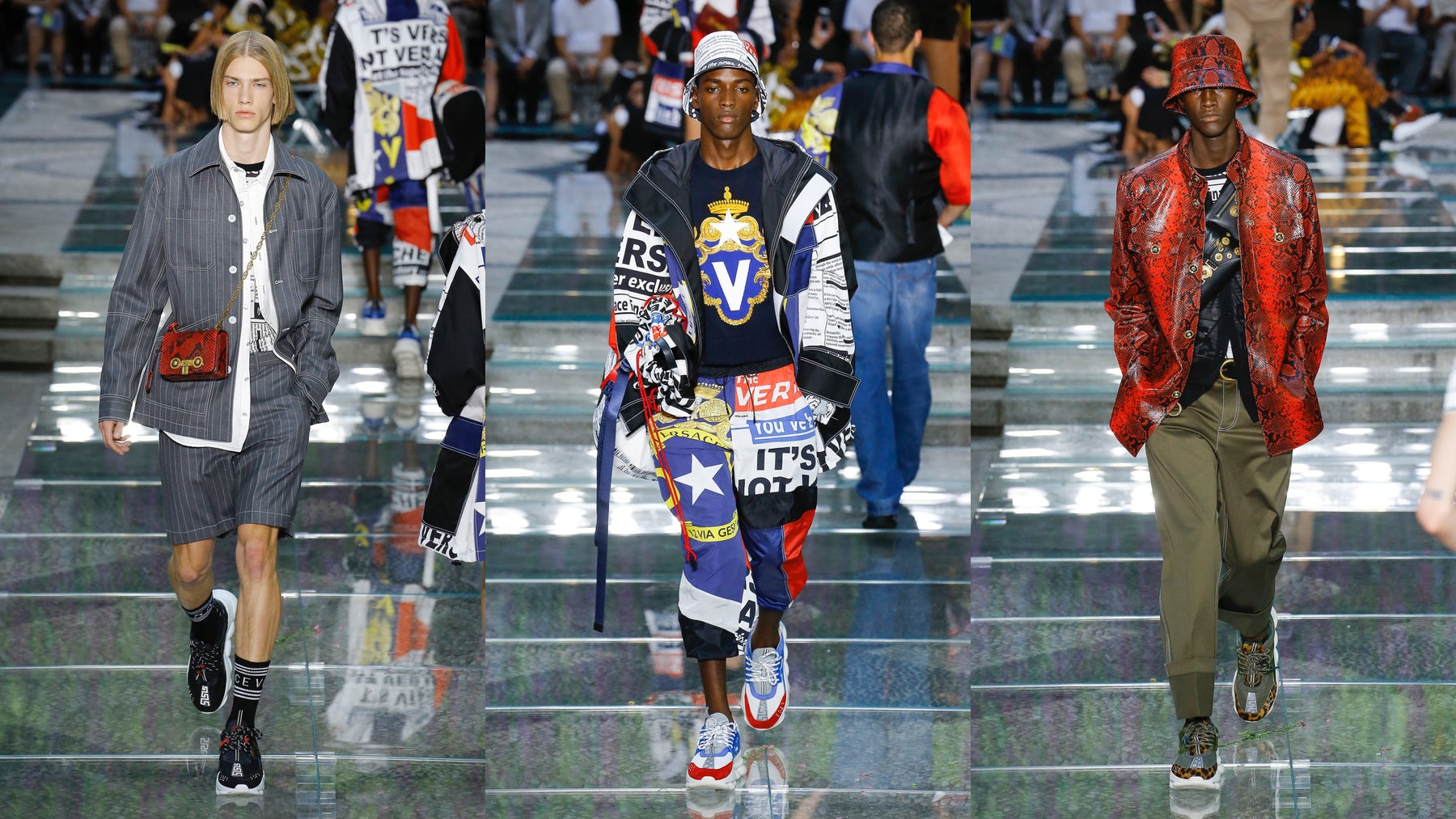 Enough is enough: we've seen every possible take on the sportswear trend, every variation on the ugly sneaker thing. It's time to move on and test new grounds.

Clearly the stuff we keep seeing is what the market is asking for at the moment, but, as they say, luck is on the side of the brave. Sometimes moving contrary to mainstream trends generates a new need — and with that commercial success.

But Milan seems to have turned into sportswear fashion week, which is not good at all. Take for instance Versace and DSquared2: both brands delivered excellent shows full of desirable product, yet it was so formulaic and predictable. I expect Donatella Versace to upset me and challenge my views, I expect DSquared2’s Caten twins to surprise me. Following the flow is for cowards, and these creators certainly are not cowards. 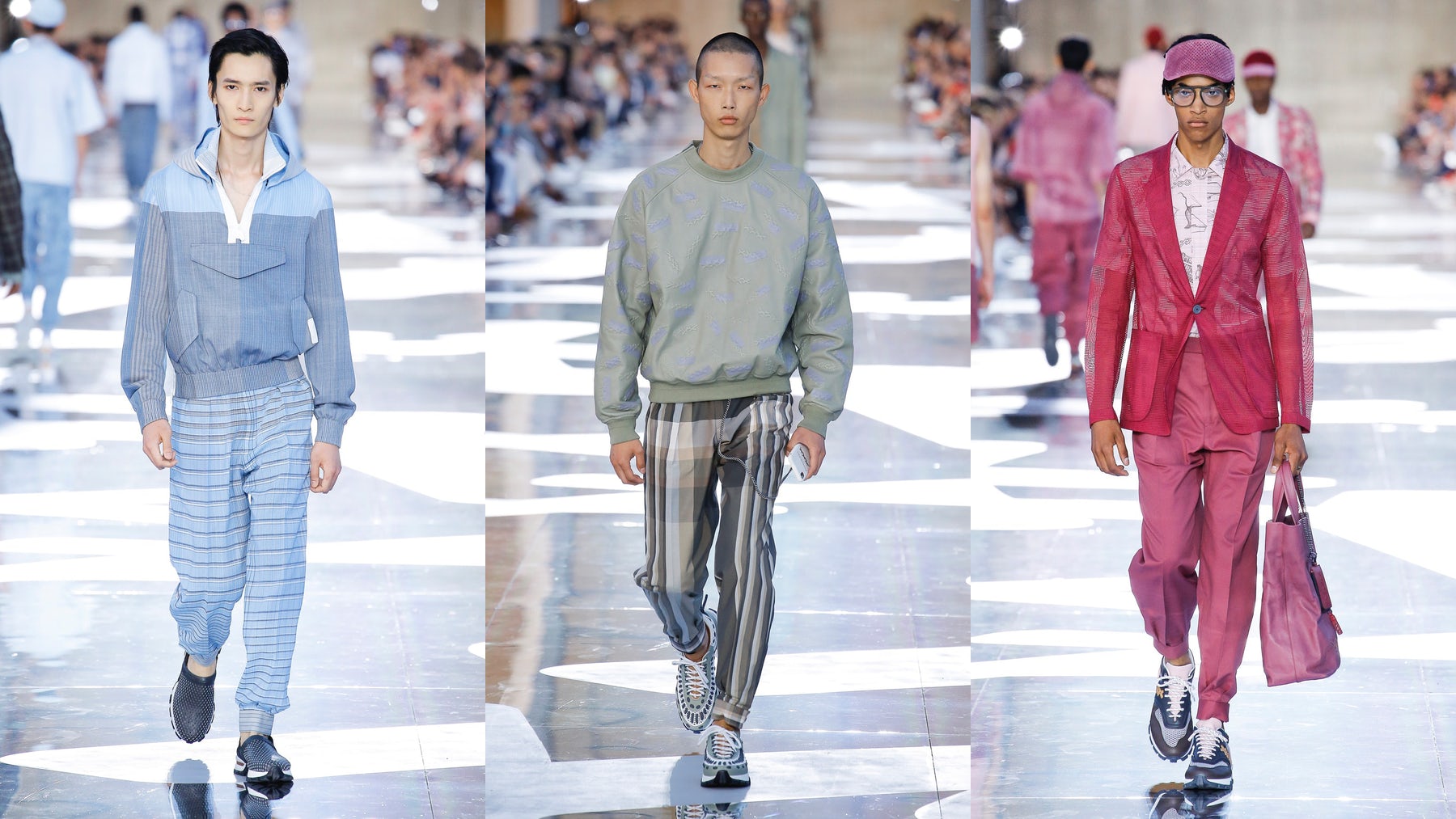 Elsewhere, even the evolved streetwear purveyors need to evolve, because counting on new graphics every season is not enough. This season, both Marcelo Burlon of County of Milan and Francesco Ragazzi of Palm Angels tried to up the fashion ante, going past the basic shapes of the past. This was praiseworthy, yet it came with a set of references so loud and so clear — from Prada to Undercover to Raf Simons — it almost verged on the naive.

In this wasteland, a few leaders still survive, marching to their own beat. Designers who interpret the sportswear fever in their own way; designers who are resolutely trying to get out of the sportswear trap. At Ermenegildo Zegna Couture, Alessandro Sartori delivered his most lively collection to date. (He also gets kudos for best location of the season: a Niemeyer building right outside of Milan, looking like Gattaca.) The way Sartori mixes couture finesse and speed, performance and design is truly progressive, as the elegant effortlessness and absolute weightlessness of his clothing testifies.

Francesco Risso of Marni interpreted sportswear in his trademark bonkers sensibility, and won with a poetic collection filled with odd characters dressed in layers of soft volumes and spontaneous shapes. In a moment of crazy hi-tech, Marni's lo-fi was truly refreshing. Meanwhile, Fendi's devilish and playful take on normal translated into another standout collection that felt young and desirable, and yet never forced. 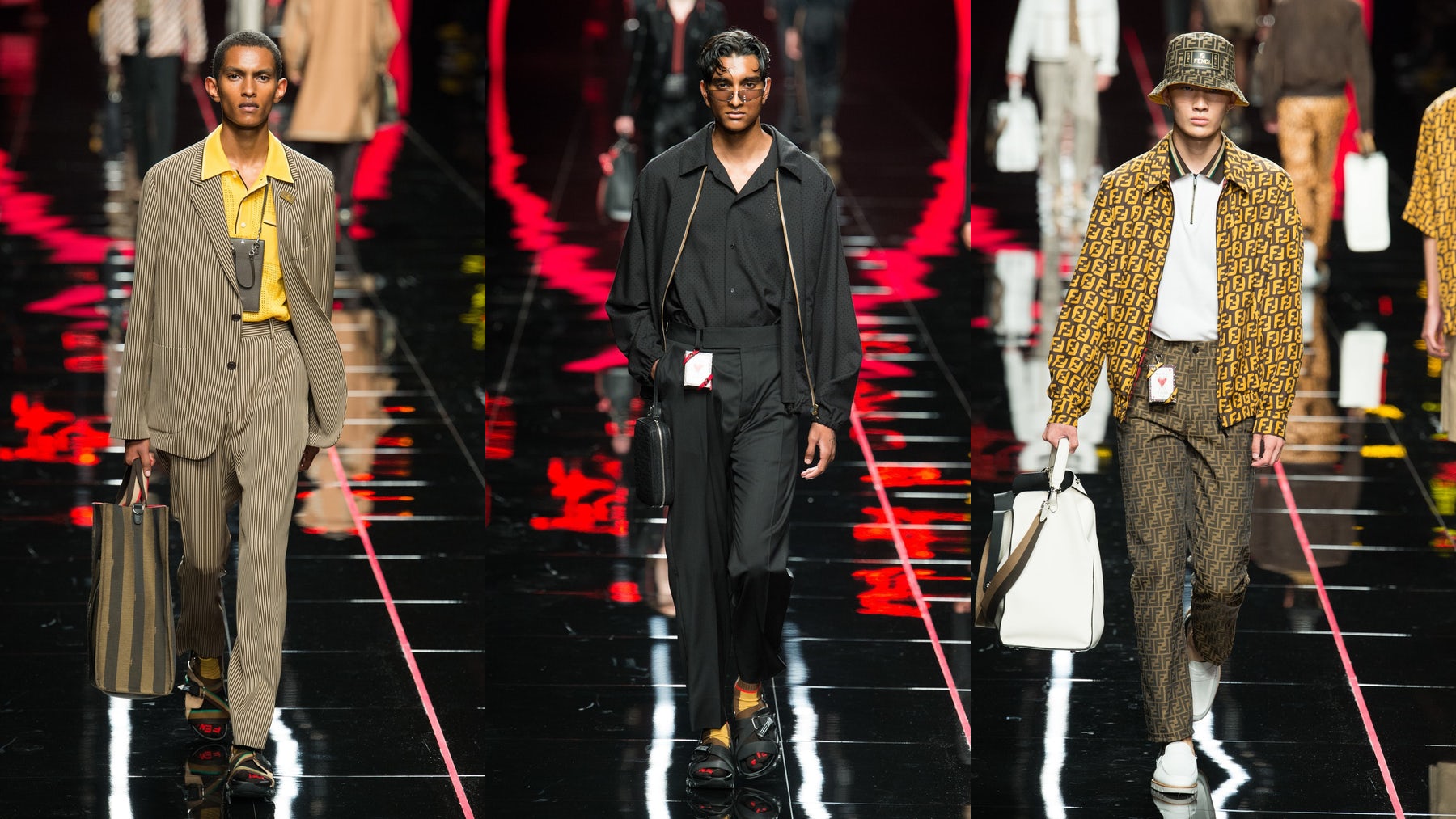 Otherwise, light came from those contrary-minded designers who are pushing a new, softer and younger formality as an antidote to the pervading sartorial laziness. Queen of understated cool Stella McCartney, for instance, or Miuccia Prada, whose ode to tailored short shorts baptised the erogenous zone of the season: legs.

There was something melancholic in Prada's ode to the young thin body, and certainly the collection was forcibly styled, yet Miuccia deserves a prize for trying to push the conversation forward. So does Giorgio Armani, for sticking to his ideas no matter what, constantly delivering soft tailoring along the way.

On a closing note, one of Milan's outstanding collections was Diesel Red Tag designed by Glenn Martens. This was Italian flair at its best: a commercially-minded brave entrepreneur on one side, a renegade designer able to turn wild ideas into real, progressive stuff on the other, united in the name of product that is saleable but charged with the highest fashion content. In the end, there is hope. Commerce and creativity are never mutually exclusive.