MILAN, Italy — In Milan, at the men’s fashion week which closed yesterday, the collections focused largely on a newfound sense of classicism: a return to the roots of dressing properly — in tailored pieces, that is. And yet what really bubbled to the surface was a sense of arrested development.

Ultimately, Milan was about youth: adolescence forever. The catwalks were flooded with men-children, and not just because of the prepuberal, rake-thin boys that ruled the casting.

The promise of eternal youth is one of fashion’s most enduring narratives. New clothing comes with the illusion of a new self, pushing the fear of ageing and death further away. Better still when the clothing makes the wearer feel, if not look, physically younger. Then, there’s the growing need to appeal to the actual young: the Millennials who increasingly drive sales.

“Young people are usually brought into the fashion conversation when adults want to sell them something,” said Miuccia Prada, on point as ever. On the topic of the homme-boy, Prada has long been a forerunner: Mrs Prada has a proclivity for the puberal and the prepuberal, and the terrific collection of neo-tailored, modernist dressing she showed in a metaphysical square complete with anti-heroic equestrian monuments, was a twistedly formal, fastidiously elegant take on the topic. Seen from above, the models looked very small, like little action figures, in a de-heroification that making all that classicism look highly tempting, if a bit diminishing. 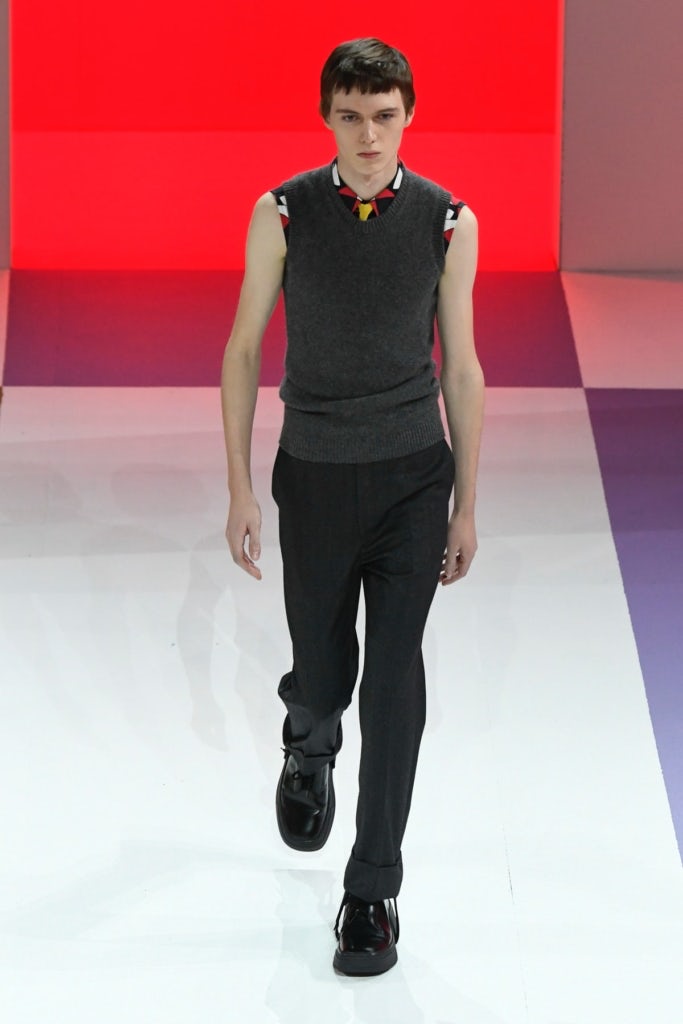 Youth and education make for a powerful pair, which lent many of the Milan shows a scholarly vibe. There were severe, Swiss-boarding-school undertones to Fendi’s men’s collection, one of the best Silvia Venturini has designed for the house, and one of the standouts of the season. The skirt/trousers and the heavy footwear paired with lean, straight blazers resembled the look favoured by tutors — female tutors, but who cares — but things were twisted by a deranged take on modularity and functionalism, complete with some seriously amusing packaging accessories.

At Gucci, the quest for eternal youth reverted to full-blown infantilism. Following a handwritten invitation to his “fifth birthday rave,” Alessandro Michele brought the audience back to school with a fey and costume-y attack to hetero-normativity. We know that, at Gucci, normal sucks, but this time the goings got particularly twisted: adults were dresses in children’s clothing fashioned as mini replicas of adult clothes. Oh, concepts! The school metaphor was not just a mise-en-scène, but an invite to unlearn staid schemes and widen perspectives on masculinity. It made for a bold outing charged with an eerie, forced brand of strangeness. As liberated as the Gucci men looked, they also looked like Alessandro Michele clichés. 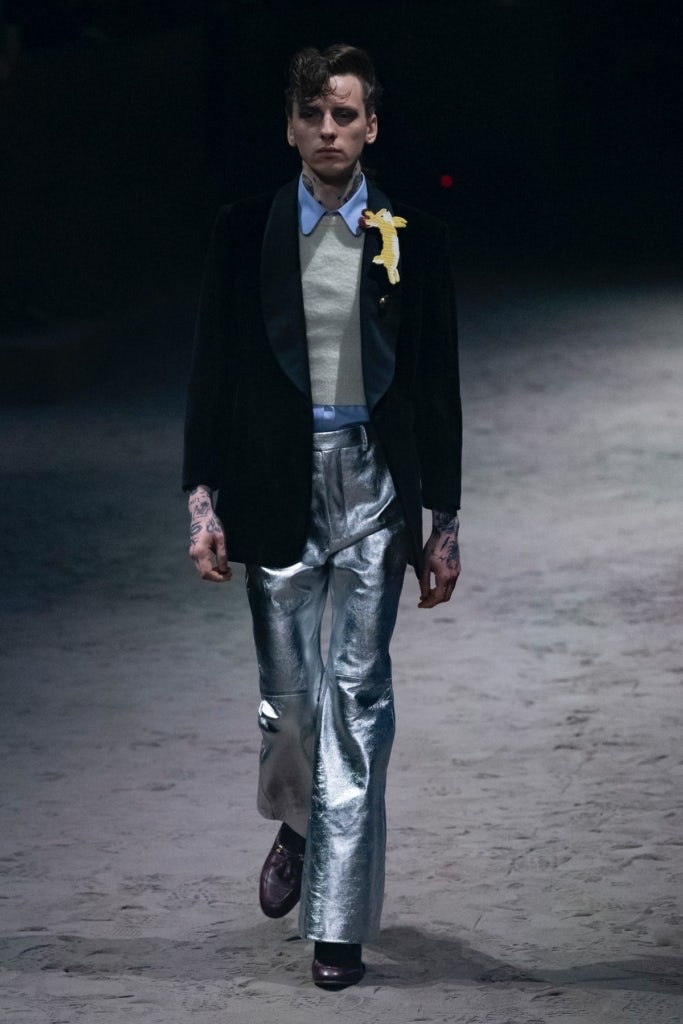 Elsewhere, Luca Magliano looked again at his beloved late-70s and early-80s, this time with an early Almodóvar flavour, staging his show in a run-down bar that was once a meeting place for Milanese outlaws. Clothing wise, Magliano’s study on the masculine cliché of the dangerous man translated into pieces that integrated mistakes as part of the tailoring — very Margiela, if you ask me — and it all looked engaging and amusing, if a bit costume-y. Magliano’s clothes might look derivative at times, but they certainly have a personality.

Armani’s clothes, too, have personality, and a very soft hand, but telling one collection from the next can be rather difficult. Meanwhile, at Sunnei, Simone Rizzo and Loris Messina, who are usually quite optimistic, embraced angst, which made for a gloomy show of humongous menswear and body-conscious womenswear that exuded a kind of forced cool quality.

Francesco Risso at Marni was a moment. Over the past few seasons, the designer has taken some bold steps forward, in particular when it comes to show format. This season it was a dance performance, equipped with a crazy mix of clothing in all sizes and levels of distress. It was a punch, but what really struck was how much the whole thing seemed to happen inside a bubble, which, all things considered, was just another way to let the inner child run riot and acknowledge the fact that never growing up is one way to respond to the grimness of the times.

It was both joyous and dark, which spoke to the overall vibe of the week: a feeling of fear and insularity attached to the sweet dream of eternal youth. Western Civilisation is not passing through its best stage at the moment, but escapism, whatever form it takes, is not the ideal solution. It’s the easiest. It would be interesting to see designers explore more nuanced takes on masculinity — sans theatre, and not necessarily youth-focused, but progressive in their dignity.