MILAN, Italy — There were persistent whiffs of militarism in the Milan menswear collections shown over the weekend. Alessandro Dell'Acqua jumped on the military bandwagon with his No.21 collection for Autumn/Winter 2016. Martial touches have always been part of his lexicon, but this season they took on a more apparent, and sometimes too literal, spin: outsized breast pockets on ribbed jumpers; parkas and field jackets in various shades of khaki. 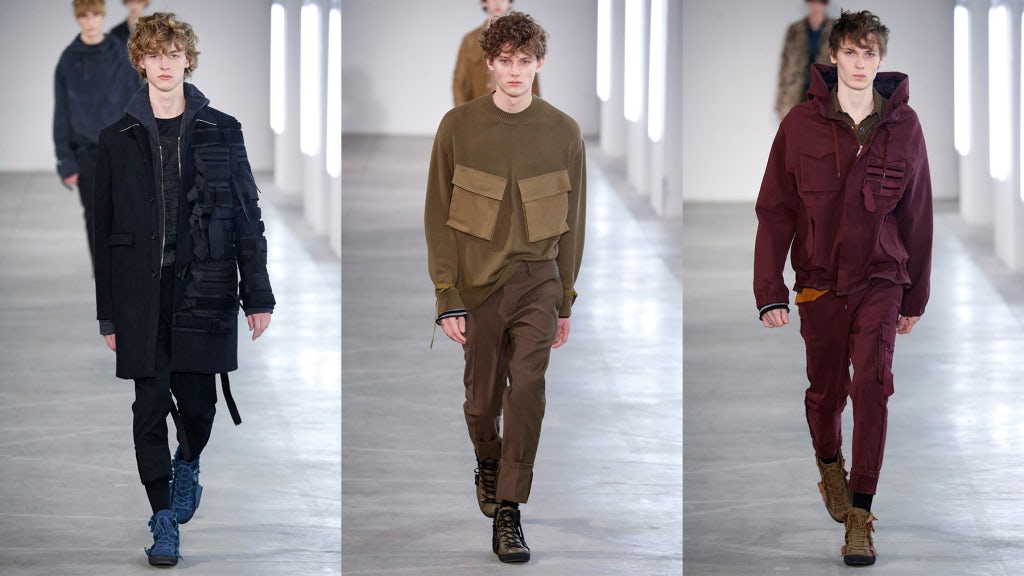 Backstage, the designer spoke about a reinterpretation of Mod, with a gentle touch. And, while a reinterpretation it was, it missed the point: Mod's trademark sharpness gave way to crumpled slouchiness; modernism to insouciant dashes of femininity, including lace">lace and washed satin.

In other words, Dell'Acqua's collection was business as usual for the designer: a mixed-up recipe is what we have become accustomed to. It left the impression of something lazily, if studiously, put together.

A bit more effort is also something I expect of Thom Browne, whose collections for Moncler Gamme Bleu have, of late, turned into a bit of a gimmick, revolving obsessively around a single concept. This time it was camouflage from start to finish, complete with sinister balaclavas that, given the current state of world affairs, felt obtuse. 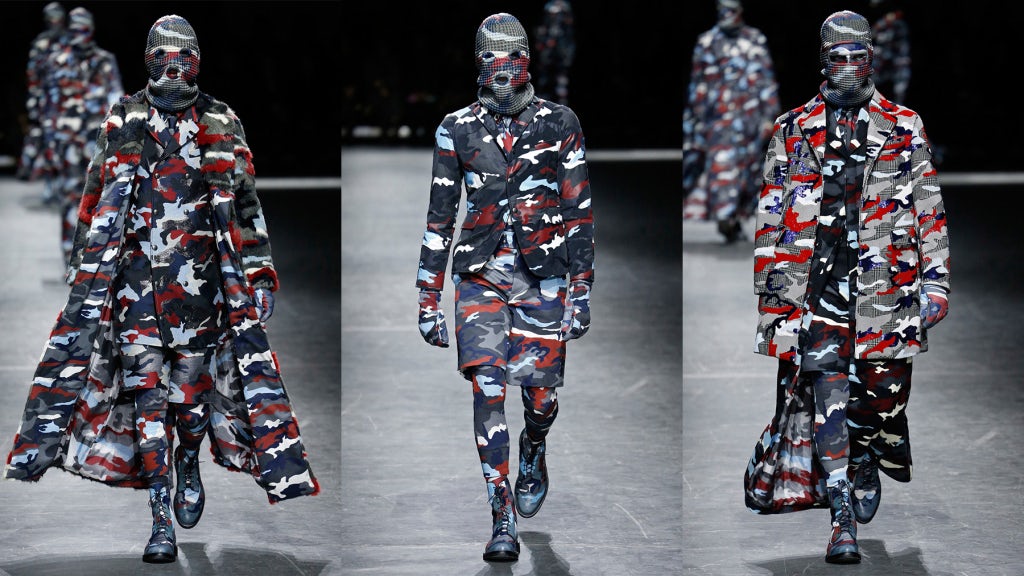 Massimiliano Giornetti is certainly not lazy at Salvatore Ferragamo. Way too subtle in his expression of tone, perhaps, which has made some of his past collections hard to remember, but not this time around. There was a palpable self-assurance in his delicately bold moves and a firm will to operate within the classic codes of the brand, with hints of distortion. Giornetti said he was inspired by the cultural environment of Vienna at the beginning of the 20th century, which was, at once, extremely rational and wildly emotional. It was a good point of reference for today's extreme and extremely confrontational times. 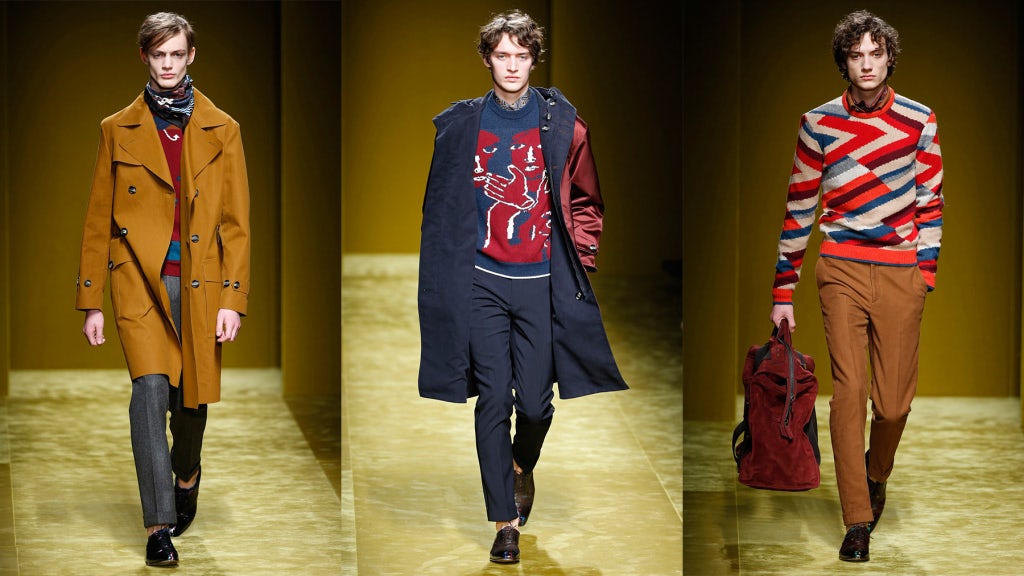 If it all sounds a bit brainy on paper, fear not. Giornetti knows how to handle obscure references. He produced a fine collection of  and knitwear that left you with the impression of having seen an artist on the way to his atelier. Maybe it was the paint-splattered shoes or the heavy sounds of scratched graphite that made up the soundtrack. The play of textural distortions on the fabrics and the slightly offbeat proportions — roomy coats, compact knits, easy slacks — worked well.

Speaking of knitwear, at Missoni the ebullient Angela kept shaping her vision of the Missoni man, using the originator of the brand himself — her father Ottavio Missoni — as a blueprint. Why shouldn’t she? Energetic, athletic, outdoorsy and optimistic, Ottavio was way ahead of his time, and the real herald of the ‘multi-culti’ and utterly realistic Missoni ethos. 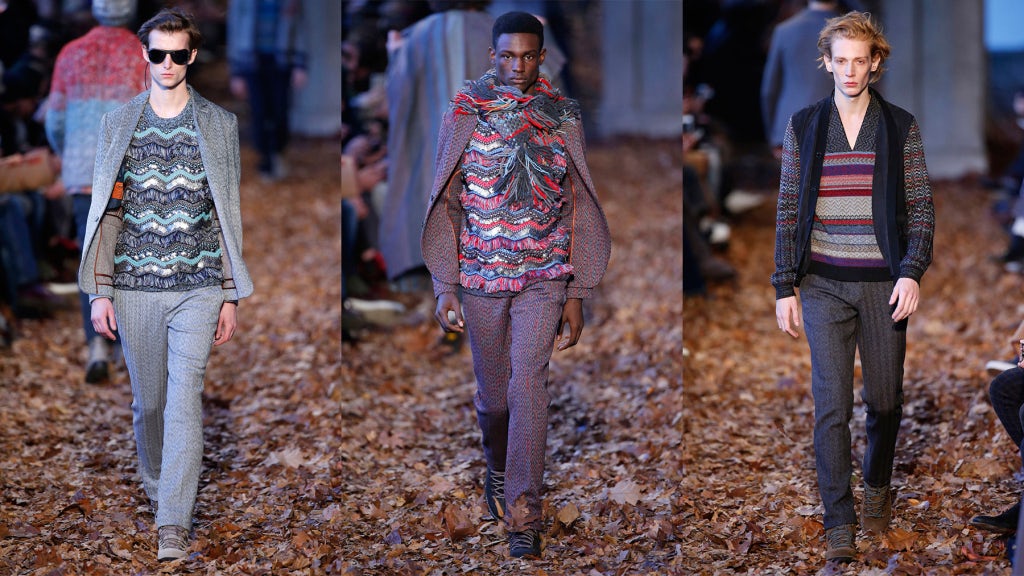 This said, sending this kind of man down a catwalk can be a daunting exercise: he is more or less always the same, which is both a plus and a minus. Yesterday's collection was a perfect fusion of ethnic nods, decoration and adventure, fused in painterly ways. The embroidered jumpers were eye-catching, while the outerwear was seriously tempting. As the looks kept passing by, getting grungier and more grounded, a sense of repetition crept into the affair, but the overall effect, en plein air, with the sun setting and the wind blowing, was charmingly poetic.