NEW YORK, United States — Two years ago, when Jahnkoy designer Maria Kazakova began conceiving “Displaced” — a meditation on the endless cycle of fast fashion and the waste it creates — the Parsons grad had no way of knowing that the resulting collection would be presented just days after US president Donald J. Trump would enact an immigration order banning people from seven Muslim-majority countries from entering the country. Or that a growing resistance — many of whom have never protested in their lives — would be taking to the streets against the president’s extremist policies.

“It is time to speak your truth, create your community, be good to one another,” said a woman holding an accordion, bundled in Kazakova’s wares at the designer’s presentation. Thanks to her rising-star status at Parsons, Kazakova was able to secure a collaboration with Puma and resources from Swarovski for her debut collection, quilting second-hand sports t-shirts with embellished fabrics that swaddled the wearer.

The effects were eye-opening, not only because of the care that went into Kazakova’s set design and concept — one model pushed around a laundry cart strewn with flowers, standing in front of a backdrop of sales signs emblazoned with “70% Off” and “Last Call” — but also in the vibrancy and detail of the garments: puffer jackets layered over full skirts, soccer jerseys tucked into lovingly embroidered track pants.

“It was a reflection of the fashion industry and what’s going on in the world, how traditional craftsmanship was displaced by fast fashion,” the Siberian-born designer said backstage after the performance. “This is a proposal of how we can revive handiwork through modern, contemporary garments. It’s ancient, but it’s new.” 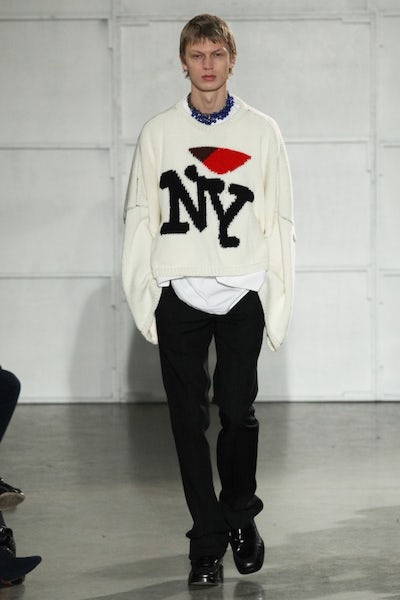 Kazakova’s debut may have been two years in the making, but it came at just the right time for NYFW:Men’s, the still-nascent attempt to provide a showcase for the growing men’s fashion industry in the US. For the first time in its four-season run, it felt that there were truly creative brands emerging, led by Jahnkoy, as well as Bode — a homespun, patchworked collection with real commercial appeal — and Palomo Spain, the baroque, flamboyant label designed by London College of Fashion graduate Alejandro Gómez Palomo.

Of course, these newcomers were buoyed by the presence of international names that chose New York as their platform this season — most notably Raf Simons, who delivered an emotional, honest collection that is sure to inspire the hoards of brands here that reference him so frequently (and directly). But also Hugo Boss, a business with a $4 billion market capitalisation that is working to win back its American customer.

“Raf coming to New York reminds me of a time when Helmut Lang moved his shows here, which was great for the design community and provoked a lot of change,” said Bruce Pask, men’s fashion director at Bergdorf Goodman. “Raf adds a level of gravitas. It’s a great affirmation, generous and good for New York City.”

Because of these two names in particular, NYFW:Men’s had more international buyers and editors in attendance this season than ever before. And while American stalwarts including Michael Kors, Tommy Hilfiger and Thom Browne were absent from the calendar, others — including Ralph Lauren and Billy Reid — returned.

The week was bookended by opener Reid and closer John Varvatos, who showed in venues that nicely reflected their well-delineated brands: Reid at a speakeasy-style bar in the basement of the Beekman Hotel, Varvatos at the patina-heavy Diamond Horseshoe supper club. In between, the packed schedule was filled with plenty of misses — most designers here are still lack their own ideas as well as the ability to deftly appropriate others — with some standouts woven through. 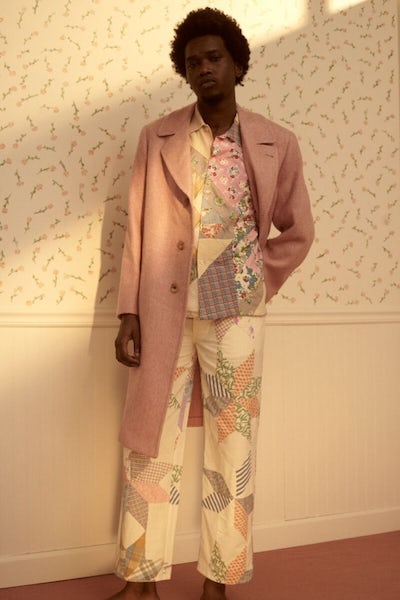 Todd Snyder rustled things up a bit this season, designing a preppy, corduroy-and-velvet suit-heavy wardrobe worthy of the waspy, dishevelled — and murderous — clique in Donna Tart’s 1992 classic, “A Secret History,” and the collection was better for it. However, it would be nice to see him push a little further into his own aesthetic, which is right now defined by a shawl-collar tux. What else can Snyder own?

John Elliott, who wants to be known for more than sleek sweats, aimed to push things further by incorporating suiting into a lineup inspired by NBA’s finest. He isn’t there quite yet — the double-seamed, two-button grey wool blazers don’t have the same oomph as his terry-cloth court shorts or garbled-tweed fly-away pants — but Elliott has a quiet confidence and understanding of his customer that continues to serve him well after 10 seasons.

In perhaps what was the most controversial show of the week, Japanese designer Daisuke Obana of N.Hoolywood sent his street-cast models down the runway in what was described in the show notes as clothes inspired by the homeless. While some were outraged by what could be interpreted as glamourisation of vagabond style, it seems that Obana’s intention may have been lost in translation.

What came across on the runway was not flippancy but instead an interest in protection and security — the way this marginalised community is able to support itself by layering on items, piece by piece. Designers have crossed into this territory before — and it’s a territory worth exploring, especially when your garments are as compelling in their drape and structure as Obana’s. 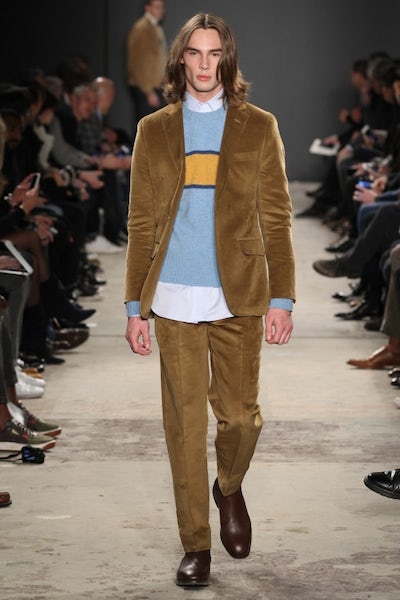 Other standouts included Theory — which is nailing the new, wider-leg trouser, making it accessible to American male shoppers still skittish about fashion with a capital F — and Jeffrey Rudes, whose glossy style is legitimised by his love of fabrics that feel good. (“Who doesn’t want to wear a silk shirt?” Rudes asked at a cocktail party on Tuesday night, dressed head-to-toe in his own garb, including suede boots designed to fit perfectly under his standard jean.)

Refreshing, too, was the move further away from the runway format. While it was nice to see a talent like Patrik Ervell, whose “pre-internet” fashions — polar-tech fleeces and cropped pull-on pants — bring his excellent ideas back to the catwalk, more brands are realising that it’s important to think hard about format.

Orley, which made use of its partnership with Swarovski by sourcing deadstock matte stones to decorate its knits, showed once again in a Tribeca loft. This allowed the designers — Alex, Matthew and Samantha Orley — to walk each visitor through the collection, this year inspired by hours of listening to Nick Drake. Orley’s concept doesn’t change drastically from season to season, and that has been good for the brand as it is now joyfully recognisable to the client, who in turn becomes a repeat customer.

David Hart, a talented suitmaker with a flair for haberdashery, is only learning this lesson now. In the past year, he has buckled down on his custom business, scoring a few notable red carpet placements and a prominent role in a recent GQ shoot featuring Ryan Gosling. This season, instead of presenting dozens of different looks, he focused on shawl-collar and peak-lapel tuxes, which came in dandy plaids and check jacquards, as well as unexpected colours like burnt orange and prom-date pink.

The whole of the week felt programmatic: fashion as entertainment. Thaddeus O'Neil, inspired both by disco and punk, sent his models out in roller skates. Death to Tennis, one of these skate-brands-for-dads that have been emerging as of late, put on a peep show at the Le Bain nightclub at the Standard Hotel: attendees had to peek through slots to get a glimpse of its quilted jackets and cargo-sweats. Local favourite Tim Coppens, who showed his main collection at Pitti Uomo this season, threw a party downtown in celebration of his Autumn/Winter 2017-inspired book “Candylips” and showed some new men’s and women’s pieces as well. 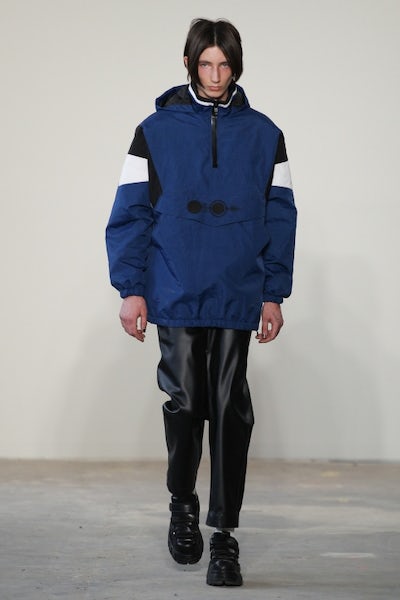 But even if NYFW:Men’s attendees were enjoying themselves, is the week important to the global community? If Simons chooses to show here once again, the answer may very well be yes. But Amazon — the event’s title sponsor for the past four seasons — has come to the end of its contract. As fashion week continues to become more fluid and flexible — with designers showing where, when and how they want instead of feeling compelled to slot into traditional fashion week schedules — how necessary is an official men’s fashion week in New York?

Council of Fashion Designers of America chief executive Steven Kolb confirmed the organisation is committed to hosting yet another string of shows in New York this summer. “We have returning sponsors and sponsors that are going to re-invest in different ways. And we had many corporate marketing people in and out of our venue for three days,” he said. “I’m optimistic about that. But I also think, as it matures, I do see us having to invest less in a central space, instead focused on connecting things around so that it works with people’s schedules and travel.”

The notion speaks to the rise of “fashion week fluidity,” something that’s been very much in the air in recent weeks, with designers like Proenza Schouler and Rodarte announcing major changes to their show strategies. “I think it all really does connect back to what we were talking about last year with the Boston Consulting Group study, about trying different things,” Kolb said. “But I don’t think Fashion Week is on the verge of being extinct at all. There will always be a Fashion Week as long as there is a demand for Fashion Week.”

A Wait-and-See Approach to NYFW: Men's