NEW YORK, United States — Let’s hear it for the menswear market: Sales for luxury men’s apparel and accessories are set to outpace womenswear in the coming years; a recent spate of changes in the creative ranks at big houses like Louis Vuitton, Dior and Burberry has created buzz from press and retailers; and the male-dominated streetwear craze is reaching a fevered pitch.

And yet, New York Fashion Week: Men’s, which ended its seventh edition on Wednesday, has yet to make a definitive mark. Most big American labels, including Ralph Lauren and Thom Browne, have abstained from participating in the standalone men’s shows, organised by the Council of Fashion Designers of America, since its inception. (Both designers declined, through press representatives, to give a reason.) And last season’s tentpole names — Raf Simons and Tom Ford — decamped, leaving the Spring/Summer 2019 roster populated with mostly lesser-known upstarts. Todd Snyder, the week’s marquee designer, closed out the three-day event on Wednesday evening.

“The story is not about who isn’t showing, the story is about who is showing,” CFDA chief executive Steven Kolb said outside promising young designer Emily Bode’s presentation on Wednesday morning. After all, despite speculation otherwise, the event isn’t going anywhere: Reebok just signed on as sponsor for the next four seasons. “I’m comfortable with where it’s landed and what it’s become,” he said. “I think we’re helping a new generation of talent, and you see it reflected throughout the three days.”

What this niche event does offer is an opportunity for young designers to really be seen: in Milan or Paris during the still-big men’s fashion weeks, they would likely be buried by more recognisable names. And there were certainly some standout shows this week. David Hart’s theme — groovy 1970s suiting and sportswear separates — was about as subtle as a jackhammer, but that turned out to be a good thing. In the midst of a sea of droopy, slouchy streetwear, Hart’s straightforward inspiration, rich fabrics and taut execution made his collection instantly stand out as more than just great Instagram fodder, though it was that too. But Hart’s clothing is hard to find at retailers, which is a shame. His knits, especially, are excellent. He’s a talented guy, and it would be nice to see his imprint in the market grow accordingly. 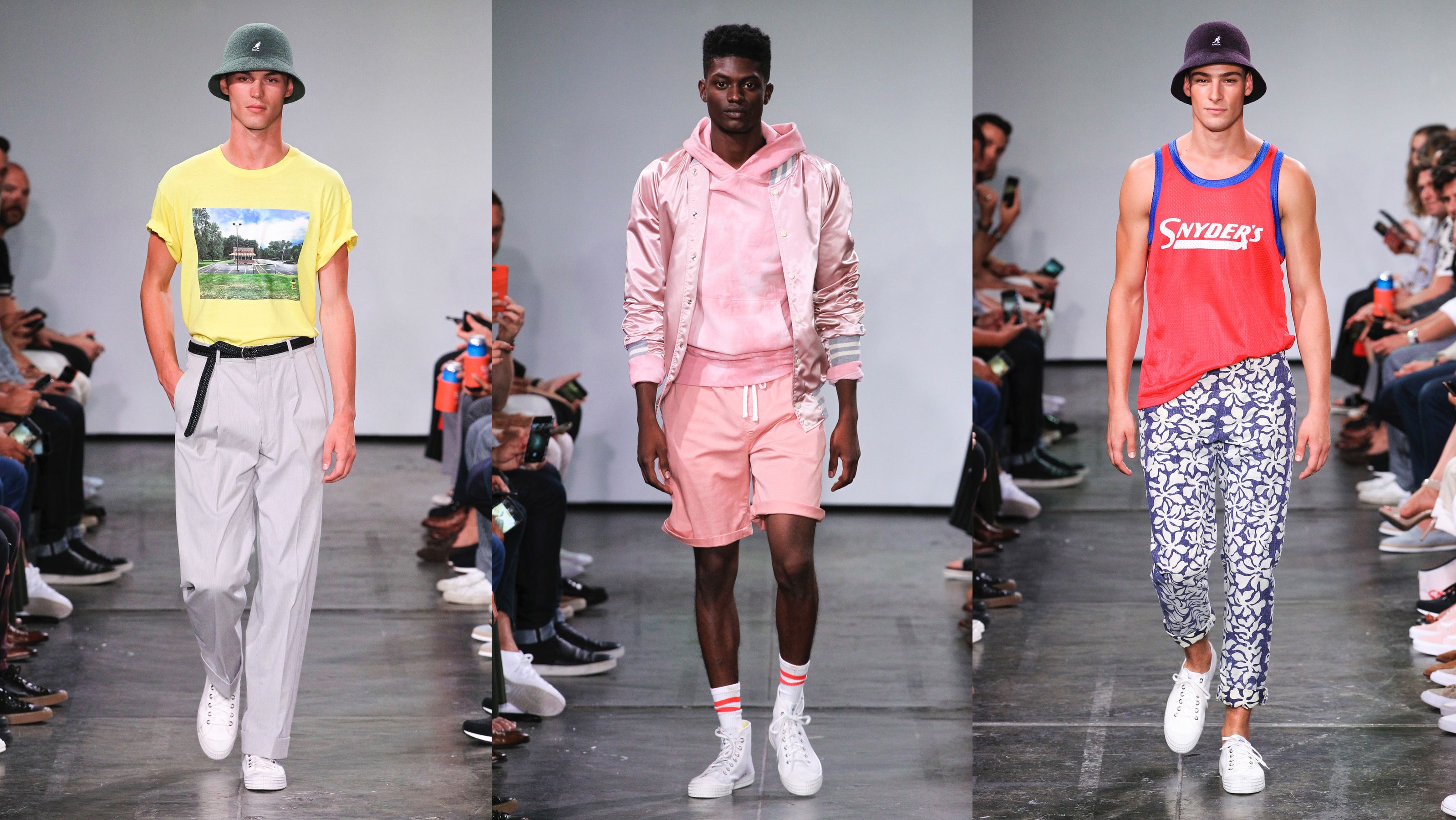 Hart showed during New York Men’s Day, a two-part set of presentations that serves a pre-cursor, of sorts, to the main event. This season the brands that presented lacked focus, a blend of homogenous ideas that, for the most part, would benefit from a distinct point-of-view. At this point, floral-print camp collar shirts, track pants, graphic T-shirts and loose-cut trousers are apt to make the eye glaze over.

One thing that’s nice about Willy Chavarria’s work is that it doesn’t hide the fact that it’s about sex. With his shirtless men and their rippling abs glistening with sweat, there’s an unabashed carnal heat. The before-the-show pantomime of a coach training his team added a homoerotic undertone to the voluminous soccer shorts, chevron-decorated jerseys and track suits made in collaboration with the Danish sportswear brand Hummel.

The second half of the collection was subtler, with baggy dark denim, mesh tops, oversized button-ups, throwback Polo Ralph Lauren energy and T-shirts featuring Canal Street airbrushed images of the World Trade Towers and Maxine Waters. Chavarria is building a foundational aesthetic deeply rooted in Latino culture, and he wisely weaves in bits of ideas — politics, sexuality, immigration, the shifting grounds of identity — without too much flag-waving (though there were ominous upside-down flag graphics on cropped sweatshirts).

“My fashion isn’t like resistance-type stuff," he said backstage, wearing a sweatshirt that had the web address for the pro bono immigration law service Raices. "I just try to be truthful." His clothing, so far, has felt deeply personal.

Alessandro Trincone sent his models down the runway in white babydoll dresses, fringe-strewn gowns, shirt dresses of tiered tulle and hats dripping floating strands of shiny mylar. Advertised as unisex, the collection is a sort of glimpse at a new breed of designer. Neil Grotzinger, who designs the collection Nihl, is a kindred spirit, turning out crystal-embellished wrestling unitards with gaping, curvilinear cut-outs. These pieces have an element of silliness and are limited in their commercial appeal, but at a time when masculinity and the male gaze are under close scrutiny, these designers’ work has some unexpected potency. 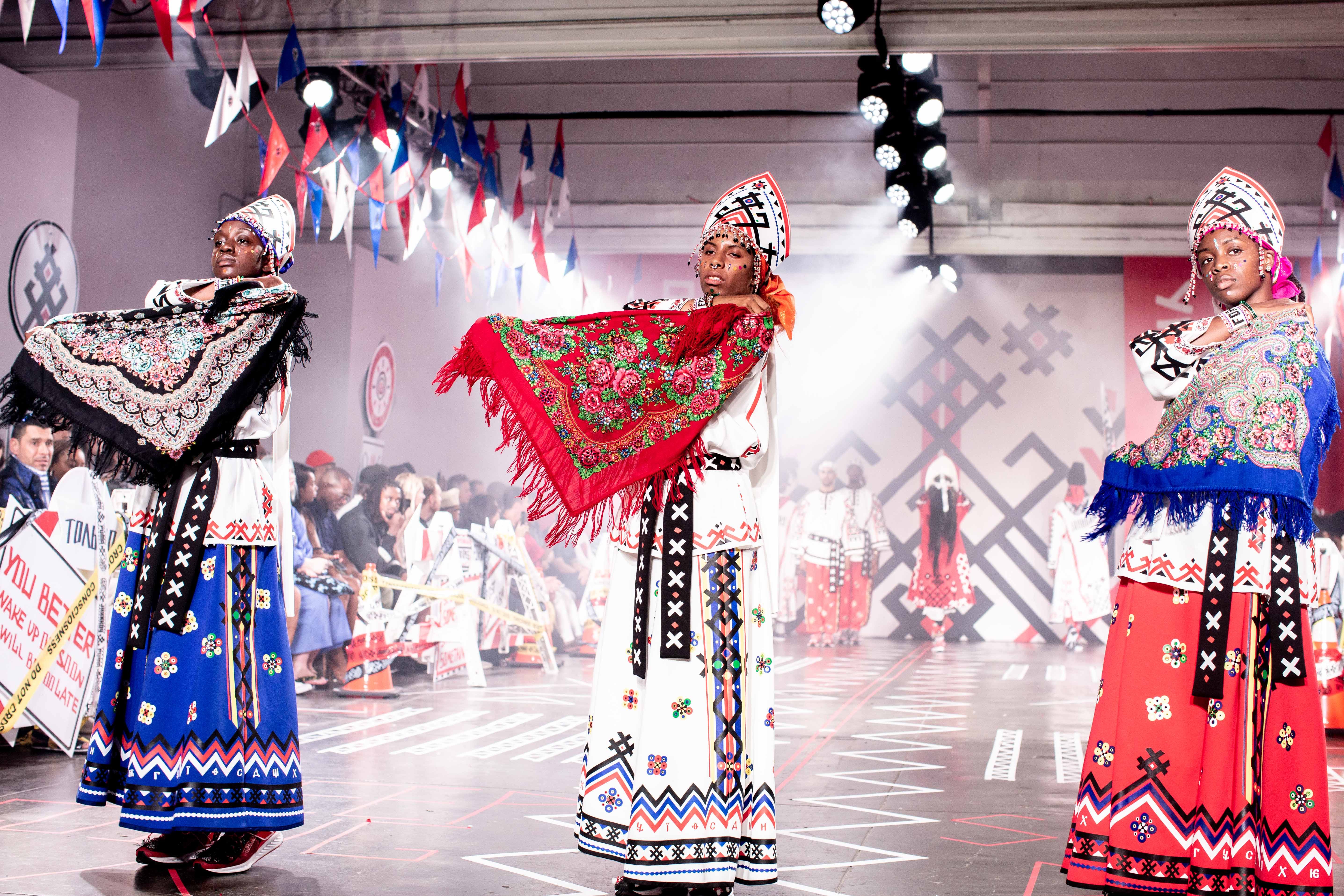 Maria Kazakova of the brand Jahnkoy presented her colorful mash-up of streetwear and global influences as a joyful, aggressive dance performance, divided into three parts moving from chaos to order (if only the world would follow suit). The energy helped accentuate the clothing’s inherent celebratory feel and athletic leanings, but also injected some much-needed excitement into the otherwise lethargic line-up of presentations. Kazakova’s work is dense; there’s a lot to chew on. Are those references to corporate logos, '90s sportswear or traditional Siberian folkloric costume? All three? None? It’s hard to tell and that’s half the fun. In many ways, her work alludes to the disappearing borders — national, ethnic, gender, sexual — that the internet has wrought. Ms. Kazakova is a real talent, reminiscent of a young Miguel Adrover coming up in the early 2000s.

Bode, the show everyone wanted to be at this week, stayed in line with her thoughtful, mediative aesthetic, proving that quiet moments have their own power. Inspired by the family history of her collaborator Aaron Aujla, the collection served as a continued exploration of memory as told through clothing. “This is nostalgic and memory-based which is why, I hope, it feels good,” she said. “This is why I do what I do, to reflect on personal narratives.”

The palette was sepia-toned like a faded family photo, punctuated by marigold, orange, and rich maroon. Straight-leg trousers and boxy shirts were designed, in part, to give the collection a feeling of timelessness, to evoke the 1940s but feel right for contemporary consumers. Aujla’s family immigrated from India to British Columbia, so Bode used khadi, an Indian handwoven textile, and embroidered it with chain-stitched signatures and dates, a wistful touch. Bode appears to be at the beginning of a fruitful career, and it will be interesting to see how she can take the hand-crafted, folksy feel and scale it.

In a moodily-lit space with gravel crunching underfoot in Soho, Public School — which pivoted to a direct-to-consumer business model this past spring — showed a collection of utilitarian wares with a slight dystopian cast. The starting point was the idea of permanence, with designers Dao-Yi Chow and Maxwell Osborne considering their own archives first. In today’s blink-and-you-miss-it world, there’s power in revisiting old ideas to see how they’ve grown. “You plant these seeds and see what they become,” Chow said. “We need to slow down and allow ourselves to let things sink in.” 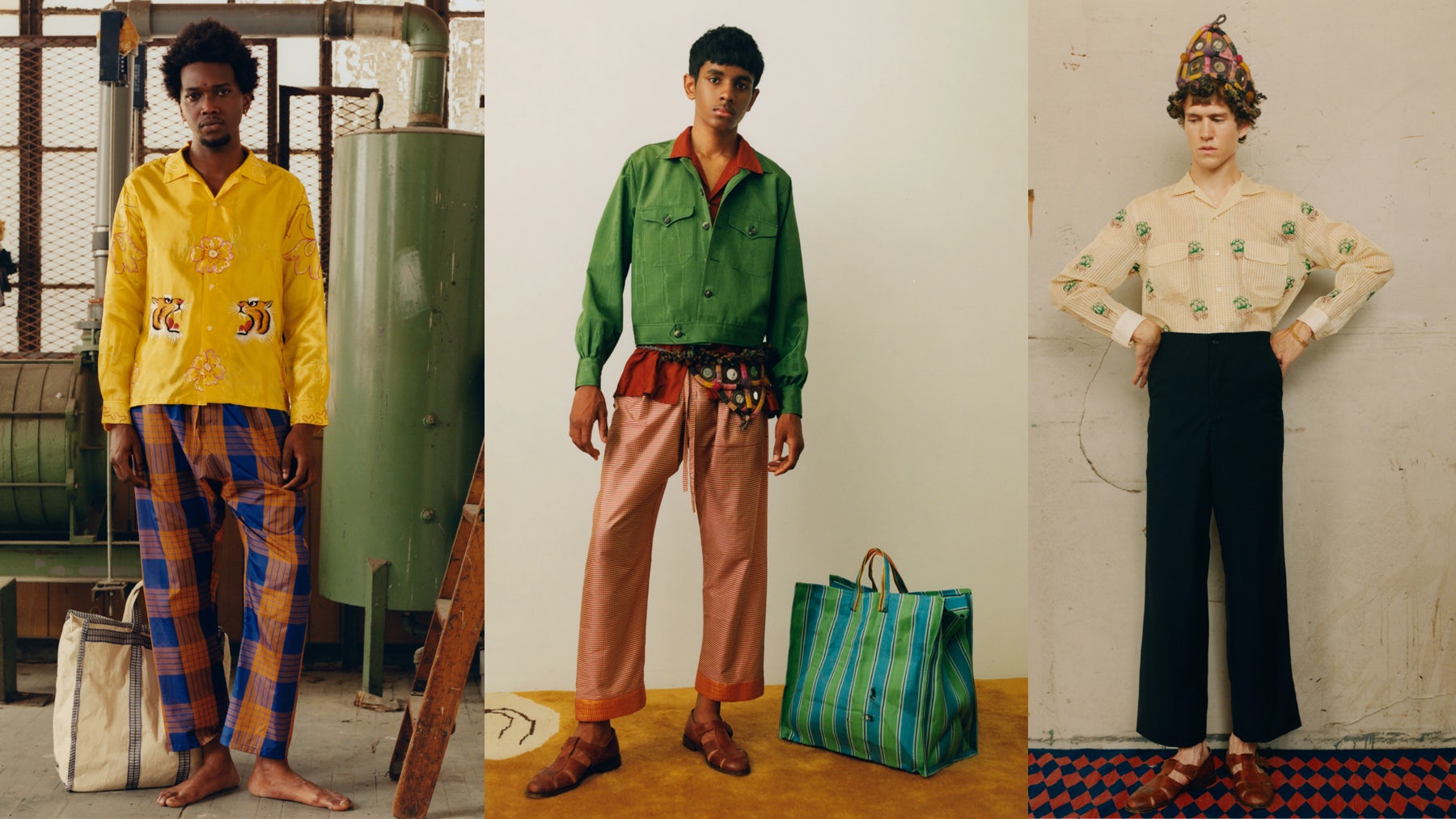 To that point, the duo used deadstock or recycled fabrics, and worked in collaboration with Levi’s, Eileen Fisher and Nike on products that reflected a sense of evergreen stylishness, not seasonal whims. To look at a crewneck sweater made of pinstripe wool typically used for tailoring, or trim gray cargo pants, roomy shirting or blazers tricked-out with oversized tactical pouches served as a reminder that Public School was at the forefront of the luxury streetwear movement.

And finally there was Todd Snyder, who, backstage in white jeans and a dark tee, said he was mining the idea of nostalgia for spring. Set to the Pet Shop Boys, there was a SoCal surf mall rat feeling to the tropical prints short-sleeve button-ups (made in collaboration Reyn Spooner, who originated the Hawaiian shirt), washed-out tie dyes and knit polos.

“I want to take things from your dad’s closet and make them fun. It’s a little campy,” Snyder said backstage. At the end of the day, Snyder excels at making clothes. That’s not as dumb as it sounds. With designers looking to make an impact on small screens and with social media likes and followers, making a striped seersucker suit that’s casual and cool or a cabana shirt that strikes a balance between aggressive and boring takes real talent. Snyder wants to create a striking image but he wants to sell garments, too. In that way, he’s as American as they come.