At Lanvin and Givenchy, the tension between tradition and modernity yielded some unlikely but gratifying dividends, writes Tim Blanks.

At Lanvin and Givenchy, the tension between tradition and modernity yielded some unlikely but gratifying dividends, writes Tim Blanks.

PARIS — Demna Gvasalia nailed one surprising cartoon collab for Balenciaga on Saturday night, Lanvin designer Bruno Sialelli pulled another one out of the bag on Sunday morning with his DC Comics connection. A lateral train of thought had carried him from Jeanne Lanvin and her role in the artistic boom in Paris between the two world wars, to the Art Deco style that informed her work, to Gotham City, Deco’s nightmare capital, to Gotham’s love/hate twosome, Batman and Catwoman, and finally to Tim Burton’s 1992 meisterwerk “Batman Returns,” illuminated by Michelle Pfeiffer’s stellar turn as the feline fatale.

Sialelli presented DC Comics with some renderings he’d made of the Bat and the Cat. They loved what they saw and gave permission to use the original artwork. It was filtered throughout the presentation: Batman on the back of a leather coat, his face wrapped around sneakers (Evan Mock craved them!), his car on a shirt or a bag or a crop top. “I’d have loved Michelle Pfeiffer to walk the show,” Sialelli said dreamily. Instead, he had Catwoman shimmering on an abbreviated shift dress cut from metallic mesh.

It was a way, Sialelli said, “to put Lanvin in the modern world.” And if that shift sounded like a party dress, it was also his manifesto. He wanted to carry the mood of his digital presentation for Winter 2021 into the real world. Called “Rich Girl,” it was a hyperkinetic homage to Gwen Stefani, one of the stars of MTV when Sialelli was getting his fashion education through pop videos. He liked the idea of party clothes because how else were his boys and girls going to broadcast their confident re-entry into a post-pandemic social life?

But Sialelli’s party was necessarily a little more layered than that. After all, not everyone wants to walk around with the Batmobile on their bosom. In the Lanvin archives, he found Jeanne’s daisy print which he made Pop. He abbreviated her classic plissé-ed Robe de Style at mid-thigh. This week in Paris also sees a massive tribute to Alber Elbaz, the man who rebuilt the house of Lanvin. Sialelli acknowledged his influence with flowing illusion tulle dresses. When the subject of Gvasalia came up, Sialelli suggested that Balenciaga has always been about “anticipation, new, new, new” where Lanvin was more “a brand about now, in a weird way.” Given that he spent several years working with Jonathan Anderson, it was no surprise that the keynote of Sialelli’s nowness was a certain unlikeliness, defined by men’s looks that ran a gamut from a stormtrooper trench in violet leather to tinsel skater shorts. He felt the pandemic had pared away so much that was normal in his world that everything was much more intense. “There’s not so much time to intellectualise what you do, it makes you more spontaneous.” There was certainly that in Sialelli’s designs, an in-your-face quality that will ideally seduce some and send others into a tailspin.

Matthew Williams’s tenure at Givenchy has already provoked a similar response. For his first live show for the brand, he returned to the La Défense Arena, the largest stadium in Europe, where he staged his digital debut in March. “I wanted to continue the language of working with light and space that we started with that first show,” he explained. The light was provided by a huge oval dome, like a James Turrell artwork or a hovering UFO.

Williams is obsessed with cut, and his collection was a masterclass in precision. Classic suiting fabrics were bonded with neoprene so that they could be raw-cut. The key silhouette for the womenswear was a flaring peplum. Williams said it was inspired by a dress in Hubert de Givenchy’s archives, though it also evoked the extreme shapes of Alexander McQueen, who helmed Givenchy later in the house’s history. Another piece he was particularly partial to was a layered tulle top inspired by paint strokes done in the atelier. The layers were carved down to create an almost X-ray effect, another slightly macabre echo of McQueen. 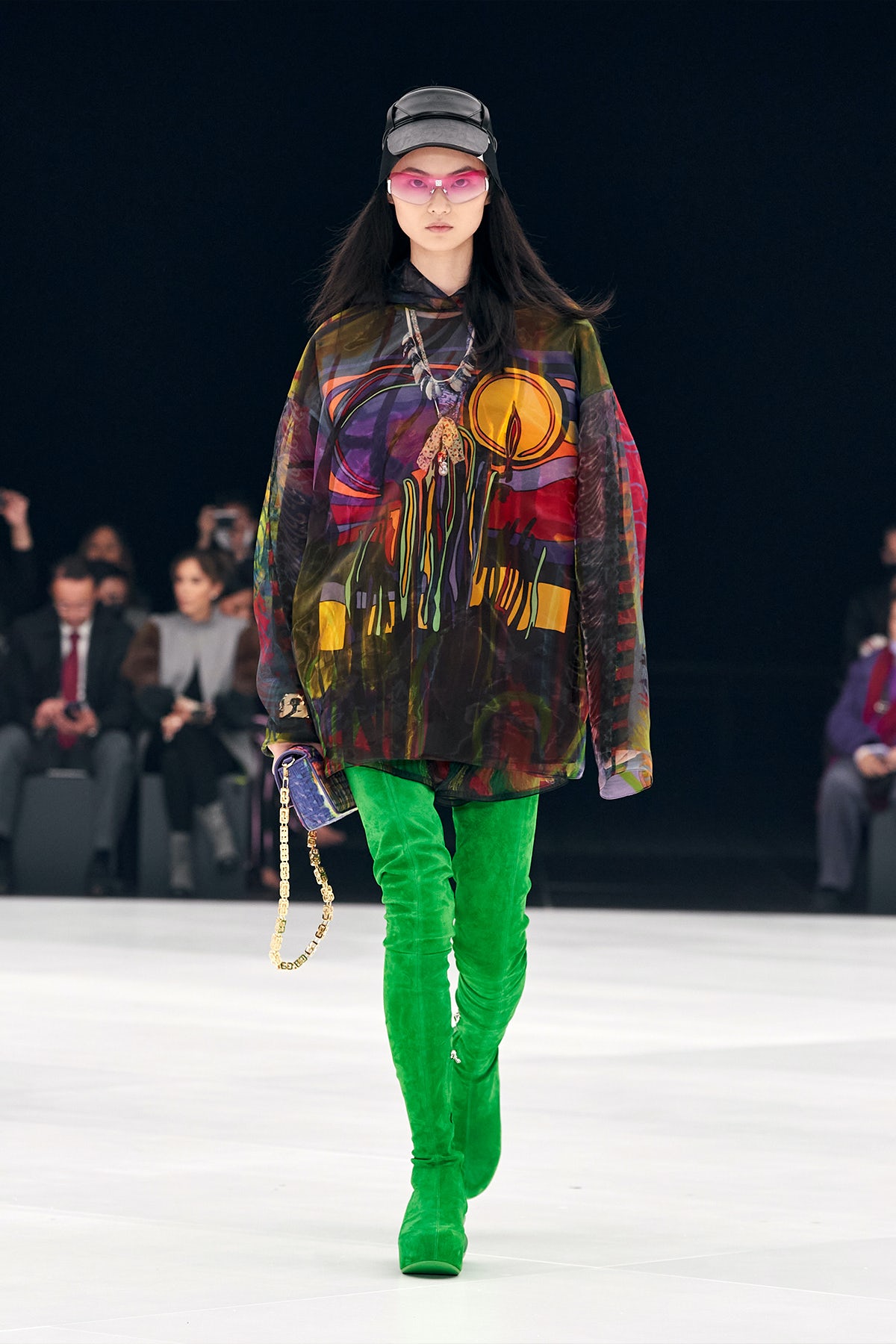 The abiding impression of Williams’s work has always been complete control, though he says he’s deliberately introduced imperfections in the past to create tension between tradition and modernity. Here, for instance, there was sharp men’s tailoring with unfinished seams. But a collaboration with artist Josh Smith unleashed another side of Williams, with a welcome introduction of colour and craft. He described Smith’s work as “obsessive, emotional, artisanal” and featured the artist’s paintings and ceramics across a wide range of items. Jack’o’lanterns, an anti-freeze container, a bleach bottle, a Hallowe’en witches’ hat were an incongruous and messy counterpoint to all that came before and after. Best were Smith’s Grim Reaper paintings translated into knits rich with saturated colour and sheathed in translucent hoodies, also glowing with colour.

As well as Smith’s art, his craft was reflected in the macramé or the broderie anglaise that was apparently based on the stencils that trim his paintings. They loaned a literally folksy edge to the collection, even – or maybe especially – when they trimmed bloomer-like shorts worn with thigh-high clog/boots (also trimmed). For one mad moment, you could allow yourself a vision of the Williams woman as a saloon girl on Givenchy’s new frontier.