In Paris, Fashion That Leaves You (Mostly) Cold

The fact that men’s fashion is shifting from the visual boldness of hyper-logoed streetwear to the composed sombreness of a new kind of formality certainly did not help this season.

In Paris, Fashion That Leaves You (Mostly) Cold

The fact that men’s fashion is shifting from the visual boldness of hyper-logoed streetwear to the composed sombreness of a new kind of formality certainly did not help this season.

PARIS, France — Forgive me if I get personal right away, but the matter is one of fundamental importance, thus can only be expressed using "I," which I prefer to avoid.

I've made a point of remaining enthusiastic, despite the state of fashion as a creative system having entered a dangerous dead end of hype as a substitute to talent and big money dictating everything, directing taste and consent in the most insidious of ways.

I've made a point of trying not to feel jaded and falling into that deprecating "I've seen it all" mindset that leads to a rejection of the here and now, inducing a needlessly paralysing nostalgia of better times that have come before. After all, it was Azzedine Alaïa who said: "It is interesting to know the past, but you have to live in the present moment."

Yet, despite my good intentions — or probably because of them — I'm having a hard time feeling optimistic. And, I'm having an even harder time feeling emotions of any kind — even outrage and anger would be okay — from a fashion show. Most of the time, I do not really care, and I'm left cold and bored.

That's the problem with the here and now: fashion is giving us endless streams of perfectly concocted images, never-ending drops of perfectly marketed products, printed inches upon printed inches of this and that, but no emotions at all. And without emotions, nothing endures. This is why we find ourselves craving for more, feeling empty and unsatisfied.

Fashion right now is cold and cynical — even more so when it co-opts the narrative of inclusivity, a word that is being used and abused with dedication and superficiality. True inclusivity would be a challenging and revolutionary concept if brought into the secluded realm of high-end designer fashion, but the word itself has lost all meaning.

The only emotion fashion seems to actively seek out at the moment is the gut feeling that urges one to buy. That's it. This makes my work as a critic increasingly hard: I rely on the emotion of what I see in order to get my thought process activated. If emotions and feelings are lacking, however, I slow down, or even stop, which may ultimately lead to silence.

Paris did not give us much this season.

This column might end up being a lot shorter than it was supposed to be. I could just end it here. But I won’t.

As for the men's fashion week which closed in Paris on Sunday, it was a strikingly sanitised affair with just a few moments of fiery energy to keep my enthusiasm afloat. Despite having grown into a slow, six-day affair, Paris did not give us much this season. The fashion flock wandered from one show to another, craving for a light that rarely appeared.

The fact that the men’s fashion conversation is shifting from the visual boldness of hyper-logoed streetwear to the composed sombreness of a new kind of formality certainly did not help. Don't get me wrong. The pendulum of fashion naturally swings from one extreme to the other. After the streetwear craze — and the amount of lazy sweatshirts and lazier sneakers it has produced — it was about time for polished precise tailoring and a return to elegance.

Yet, as more and more brands — from Dries Van Noten to Jil Sander, from Valentino to Dior — served up neo-sartorial regalia in muted hues and loose volumes, it became apparent that while the new sobriety may be appealing to consumers, it is in fact a dangerous catwalk act because it all ends up looking rather dull.

Such was the case at Dior, where the focus on precise construction had an Italian — rather than French — almost Emporio Armani-esque tangibility of product to it. This made for some standout items, but not much in terms of narrative. In that sense, the draped sashes that were intended as an homage to moulage, the couture technique of draping fabric over a mannequin, came across as a bit forced, even if it was visually engaging.

At Louis Vuitton, where Virgil Abloh went on a deconstructed and at times rather literal take on the journey of Michael Jackson, both as a man and as a man of style, long pleated skirts (à la Hedi Slimane during his Dior Homme tenure), “We Are The World” patchworks of flags (a rather obvious metaphor) and elevated streetwear that looked more like a hyper polished version of Off-White. It was the tailoring that caught the eye, looking a bit clumsy in the layering of strata and volumes. 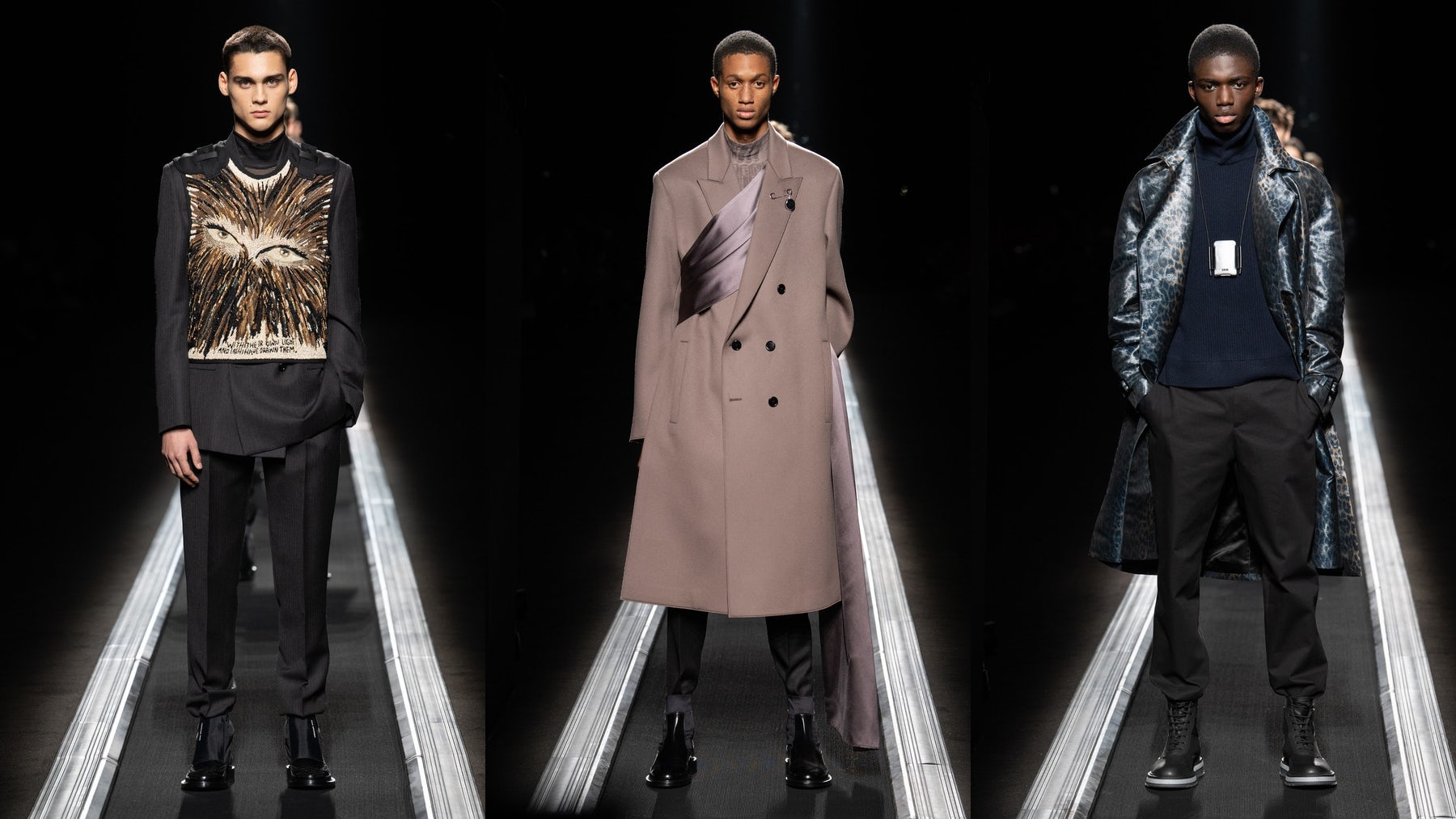 But if you take away all the storytelling and the "you can make it too" inclusivity narrative, and ultimately all the social media cool factor, Virgil’s Vuitton did not look particularly exciting. There has been little progress from the previous creative direction tenures. The only shift — a massive one — has been in communication. This collection was lukewarm, and lukewarm is never good.

It took a talent as divisive as Hedi Slimane to inject the current sartorial stagnation with some truly palpable energy, making the skinny tie suddenly desirable for a generation only used to sneakers along the way. Yes, it was the nth iteration of some old Slimane mod tropes, and it did not move things much forward, but it had panache, demonstrating that formal clothes can make a catwalk statement without making you yawn.

Over on grittier territory at GmbH, there was more tailoring — of the tacky outlaw variety — mixed with athletic gear and fetishistic stuff that made for a strong fashion statement. Here, formality was not even an option, but it was interesting to see Benjamin A. Huseby and Serhat Isik test new ground. Up and coming talent Ludivic de Saint Sernin went for the overtly sexy card, and scored with a collection of cut out tops, slender tailoring and rhinestone covered briefs that was silly as it was engaging.

At Alyx, the world of performance and that of super-dry, extra-cold, futuristic tailoring merged in a collection that was a welcome move forward for the brand. Matthew Williams’ collection was more grown up, moving out of the industrial underground niche. He still has to find a balance between active and proper designer fashion, but he is on the right path.

So, Paris did not give us much, but when it gave something, it was a burst — or a punch. There were lots of plays on ambiguity which resonated particularly in the current aesthetic climate of new — if soft — normativity. A show as powerful as Undercover's A Clockwork Orange meets Edgar Allan Poe meets time travel meets theatre meets reality extravaganza is a rare occurrence nowadays. What was fascinating was that it merged the reality of urban clothing (puffers, coats, jumpers) with outstanding prints and memorable theatrics. 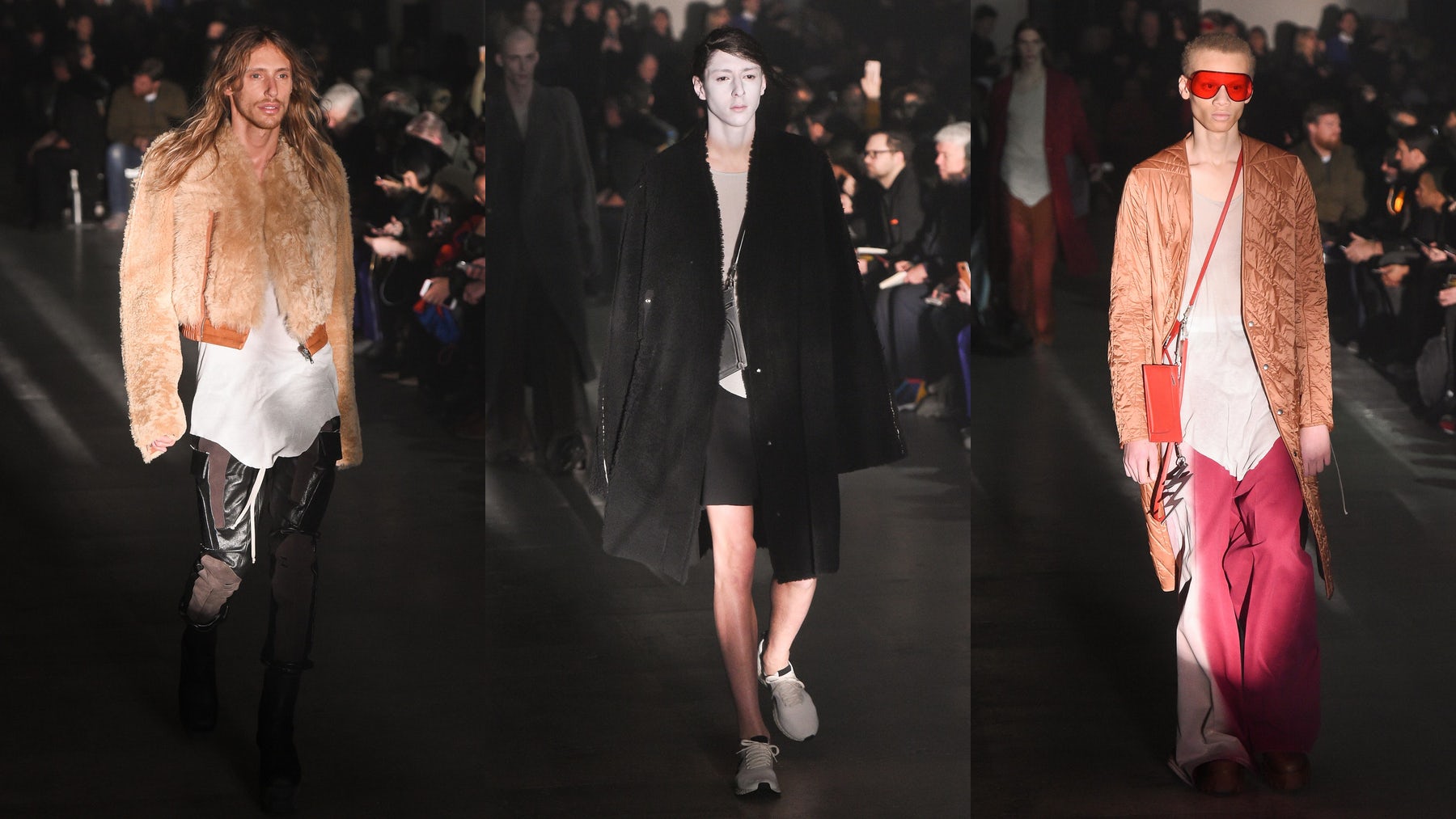 Jonathan Anderson's debut catwalk show for Loewe was one of the peaks of the season: a wonderfully melting pot of bits taken from sportswear as well as formalwear, with a touch of kinky and a bit of exotic. This translated into items of utter versatility and great design, pieces that keep you guessing but are also real, and designed for both die hard fashionistas and real men. That's quite an accomplishment.

The ever-abrasive Rei Kawakubo locked guests in a cupboard of a room, made them crazy with loud sounds and treated them to a diet of punchy black, punkish, non-normative clothing full of historic references and chains. It was both nihilistic and vital, and captivating for that: rebellion at its best.

But it was Rick Owens who really hit a nerve. Working with a Larry LeGaspi — of Kiss and LaBelle fame — inspiration through the filter of his own rigorous aesthetic, Owens delivered an electrifying crossover of sleaze and severity, of control and abandon that felt like a commentary on the moment and an escape route out of the unemotional, inert bog fashion is blocked in at the moment. Owen's outcasts in heels, platforms and skins and fabrics moulded on and around the body felt like a middle finger thrown in the face of convention. A powerful one, full of soul. That's what made it relevant: soul.

Today, this is more necessary than ever, otherwise fashion just leaves you cold.