PARIS, France — It's really hard these days to see shows that truly stick — unless, of course, you're left with something actually physically attached to your body afterwards. At Haider Ackermann, it was chalky dust.

Under the gloriously sun-lit ceiling of the Palais de Tokyo, Leonard Cohen's smoky voice sang "I'm your man" as models strode through a thick fog. The choreography was fitting, a certain fogginess being one of the most evident aspects of the collection. 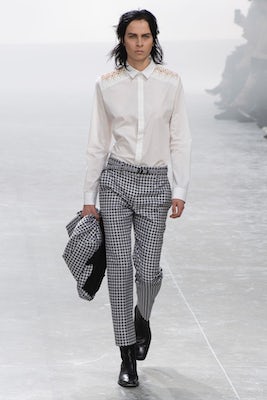 It was Ackermann's first co-ed show, and therefore an opportunity to highlight the links between his men's and women's wear. To do so, the designer opted for a decadent take on androgyny, which gave a fresh spin to the womenswear in particular. The dramatic styling tricks and excess angst of past seasons were edited away.

Ackermann dressed his poets, maudits and garçonettes in identical sharp suits and bathrobe coats cut in luscious satins and vaguely Art Deco brocades. It worked well, even though the tailoring looked at times a bit stiff. The nonchalance of such a sophisticated vision would certainly benefit from a bit of fluidity.

The physical remnants of the brilliant Noir Kei Ninomiya show were cotton tufts flying off the heads of the models for an effect that was a bit like blowing on dandelions. But the hairdos were no mere styling trick: as a perfect counterpoint to the intensely sculptural clothes — wrought-out concoctions made of wool, plastic, laminated polyesters — they created a strong aesthetic tension.

According to the show notes, the inspiration for the collection was the idea of fusion: of textures, shapes both voluminous and straight, materials both cheap and precious.

Ninomiya's forte is masterful technique: he pushed gathering, pleating, layering, taping to the extreme in pursuit of something completely new. Which is, in fact, exactly what Noir delivered: incredible, out of this world creations conveying a unique mix of romance and thoughtfulness. Something that actually stuck — beyond the cotton tufts. 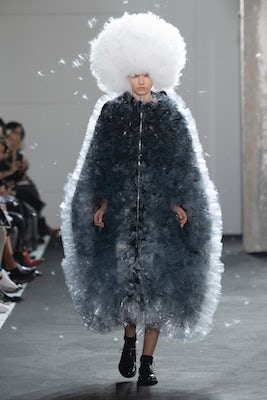