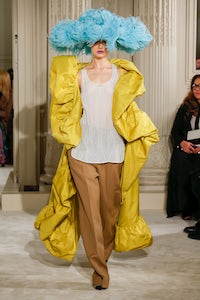 PARIS, France — “I’m not a kid who grew up with a mother wearing couture,” said Pierpaolo Piccioli, during a preview of his latest couture collection for Valentino. “I wanted to be a movie director. But fashion photography made me change my mind.” He was mesmerised by how images captured emotion. Piccioli had pinned a few of them on his mood board: a Deborah Turbeville story, Cecil Beaton’s classic 1948 shot of women wearing Charles James ballgowns... “I want to face that past and translate it into my own illusion of couture,” he said. “This is my most intimate collection.”

Intimate? It’s been a long while since there was any use for the word “grandeur” in writing about fashion shows. It didn’t really have much of a contemporary resonance. Until 6.30pm on January 24 in the Hotel Salomon de Rothschild. While Piccioli's use of the word “intimate” made sense in his own telling of the collection’s backstory, his “translation” was one of the most magnificent runway experiences in recent memory, complete with standing ovation and tears all round.

One thing that is most striking in hindsight is that, for all the glorious old-school extravagance — the huge feathered hats by Philip Treacy, the massive faille ruffles, the sweeping taffeta capes and swathes of ravishing colour — there was a distinctly modern spirit. The opening look featured one of those capes and one of those hats, but they dressed a tank top and chinos. A huge ruffle in red faille topped khaki gabardine pants. A beautifully simple navy wool caban was paired with voluminous trousers in midnight blue faille, the casual and the extravagant, elevating each other with their proximity. The same grand alliance defined one of the simplest but most striking looks for evening: a black cape atop a gown of white gazar.

Still, it was grandeur pure and simple that got the gasps. When Giancarlo Giammetti, Valentino’s longtime Richelieu, walked into the studio on Wednesday morning, he said it reminded him of 20 years ago, when there’d be “huge things everywhere”. And there they were again. Piccioli claimed one cape had swallowed up 40m of fabric (maybe he said 14, but that still boggles the mind). So enveloping you could comfortably camp in it, it undulated down the catwalk like a galleon in full sail (now that was a sight that took me back a few decades). There was a gown with a flower design that you’d rationally expect to be appliqued. It was intarsia-ed! (900 hours of work, apparently.) The morning of the show, there were still women applying minute red sequins to a second-skin sheath dress.

That degree of intense commitment transcends “dress-making”. Piccioli wanted to honour his petits mains, and the past and future they embodied. So he had all 70-plus of them write a little letter which he’d arranged on a board in the studio as a souvenir of a moment that he rightly recognised was important in the history of the house. Then he named the dresses for his workers, because giving each dress a name seemed like the essence of the emotion fashion stirred in him when he first looked at pictures in a magazine. Intimate, in fact, when all else was said and done.