Rei Kawakubo’s latest presentation was majestic and mournful, a paean to hopes unmet, dreams unrealised. The collection had a medieval, ritualistic, emotional power that overwhelmed reason. 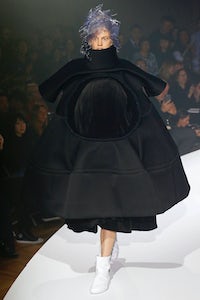 Rei Kawakubo’s latest presentation was majestic and mournful, a paean to hopes unmet, dreams unrealised. The collection had a medieval, ritualistic, emotional power that overwhelmed reason.

PARIS, France — Henryk Gorecki’s Symphony No. 3 is also known as the Symphony of Sorrowful Songs, so it made the perfect soundtrack for the Comme des Garçons show on Saturday afternoon. Rei Kawakubo’s latest presentation was majestic and mournful, a paean to hopes unmet, dreams unrealised. The collection had a medieval, ritualistic, emotional power that overwhelmed reason.

She is always exalted as an icon of modernity. Her take on a peculiar, idiosyncratic historicism is much more fascinating. Assume a child unborn: the first outfit in the show, jet black, swollen-bellied; the eighth outfit, a funereal crib;  the sixteenth outfit,  an all-red fantasy, like the lost child in Nicholas Roeg’s Don’t Look Now; the last outfit, back to the egg, a black prison, Anna Cleveland’s fingers fluttering futilely for purchase on a tight, white neckline. (Did anyone else see Alien here?) All in all, a fabulously macabre cycle. And instructive to have Simone Rocha in attendance. Long considered a Kawakubo acolyte, her last collections have dealt with the trials and triumphs of childbirth in remarkably primal ways, even more striking considering that it is the design of clothes where she has chosen to express herself.
But exactly the same thing could apply to Rei Kawakubo. Huge statements, couched in cloth. “Invisible Clothes” was her own cryptic description for her latest collection. “The purest and most extreme version of Comme des Garcons” was the addendum. Extreme, certainly, in the huge, square shapes, though Kawakubo’s silhouettes scarcely ever cleave to convention, and these were actually relatively rational in their geometry (at least in a world where Victor&Rolf once sent an upended bed down their catwalk). But in terms of invisibility, the collection exuded a palpable sense of absence, of hollows and shadows and disillusionment.
Which made the show a powerful counterpoint to the paeans to female empowerment that have attached themselves this season to the women taking over the creative director’s role in houses that were previously male-dominated. Although all of that is undoubtedly irrelevant to Kawakubo, a law unto herself for longer than she probably cares to think, her last few collections have explored notions of women on the margins. And now, childbirth, motherhood… scarcely marginal, but more difficult than ever in a world that is calcifying into rigidly held political positions, all of them shaped by men. For someone whose sensibility naturally tends towards revolution, these must be incredibly trying times for Kawakubo.