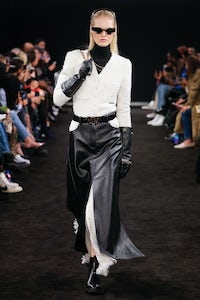 To look at his runway, filled with grandma’s Chanel-like tweeds, “Working Girl” suiting, and tuxedo-inspired gowns, there was a more grown-up Wang muse emerging. However, subversive elements kept the designer’s downtown ethos intact: Those fusty boucle jackets, for example, were paired with jeans and leather aprons while the tailoring and shirting were cut with ample room, giving them an elegant swing.

Shown in the basement of a former Brooklyn bank, complete with a vault, and dubbed “Collection 2” — part of Wang’s move to shift off the traditional Fashion Week schedule — this collection was a savvy mix of creative juice and commercial appeal. While he revisited plenty of his well-trod design motifs, he did so with showmanship and finesse. It was good timing: Wang’s brand is nearing 15 years old and has gone through some corporate shake-ups in the past year. He’s part of the establishment now, no longer a cool kid upstart who represents New York’s cutting-edge, and some of his core customers may have defected to luxury streetwear brands like Off-White, say, while, aesthetically, the trend now is less for slick sangfroid and more for the earthy, weirdo allure of brands like Eckhaus Latta and Vaquera.

“It was a lot of digging into my past and how I grew up,” he said after the show, wavy locks flowing. As a child of immigrants, he said he was fixated with stereotypes of class and privilege, and many of these ladylike tropes were a reflection of that. “I was always interested in these connotations between luxury and pretentiousness, or power and formality. I wanted to take them and throw them out the window.”

To help with that, the dueling muses of this collection were Foxy Brown and Carolyn Bessette-Kennedy — two middle-class New Yorkers who hustled their way to cultural dominance, albeit in two very different spheres of influence. Mesh netting, snake-print chenille dresses and see-through lace bodysuits were pulled from the Foxy Brown playbook whereas preppy, side-slashed polos, oversized men’s shirting and a creamy camel overcoat all called back to Bessette-Kennedy’s love of American sartorial classics. “This was about people who hustle, the American hustle. Working your way up should be celebrated.”

He also showed men’s boxy suits and swaggering sportswear — watch-printed silk twill cabana shirts, leather hoodies — alongside the ladies. Many models were carrying Alexander Wang logo-ed garment bags, bringing to mind Wall Street power brokers heading toward an idling town car ready to whisk them to the Hamptons, inspired by street photos of New York businessmen in the 1980s. It had all the typical Wang swagger. The question now is, does that swagger have the same oomph it did in the early aughts when he was fresh on the scene?

Wang said he had already seeing a positive response to showing off the traditional calendar, with last season exceeding projections. Hence the inclusion of men in last night’s show, plus he’s also moving his T line and accessories to the same sales cadence. “It’s all about how we can be closer to how our consumer shops,” he said. American hustler, indeed.