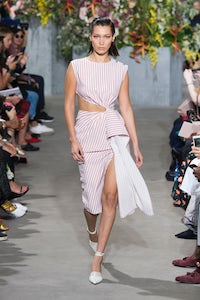 NEW YORK, United States — It’s easy to get caught up in another designer's narrative; that’s what we call being influenced. Jason Wu, however, admirably stuck to his own story this season. “Everyone is asking me about streetwear,” he said backstage before the show. “I’m a lady.”

Wu did, in fact, present his signature flavour of lady-like dressing. Asymmetrical necklines and cut-out shoulders abound, as did silk plissé, which was familiarly patchworked into cocktail numbers and Grecian gowns. He managed to find space for his favourite banker-suit grey, too, with the season's softy tailored blazer, its edges fraying and sleeves delicately scrunched up.

And yet, Wu’s chosen tropes felt less self-conscious than in recent seasons. He mentioned that the collection was looser in silhouette for spring, but it was actually all the tightening up — cinched necklines and short tracks of ruching here and there — that made it zing. Crushed parachute fabric was pulled and twisted into an anorak-hood dress, puckered seersucker cotton was done up sarong style. Spring’s standout print, an amalgamation of the different flowers Wu smelled when formulating his first fragrance, sounded more complicated than it looked. But that was the genius of this collection: Wu managed very well to lighten any inklings of a heavy hand.