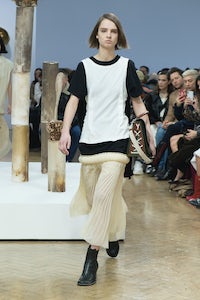 LONDON, United Kingdom — “It’s an amazing moment of clear-out in fashion,” Jonathan Anderson said after his show on Saturday morning. He was referring to all the changes underway in the world’s big fashion houses. But he could equally have been talking about his own business where he’s been doing some heavy-duty rationalising. From now on, just two collections a year — women’s, men’s and pre-, combined into one — and therefore just two shows. “We’ve reconfigured the entire way of shopping,” Anderson claimed. “Anyway, we know that a lot of women buy the menswear, and vice versa.”

For a while, he's been feeling that complicated thinking gave rise to complicated collections. Simplifying his approach meant his collections would be more straightforward. It certainly looked that way on Saturday, to his advantage. “Youthful prettiness” was Anderson’s goal. He went back to his roots, to his first collections ten years ago when he too was young and pretty, for the paisleys, the trench coats and the khakis. There was a playfulness then, there was a playfulness now, with the the girls in their drop-waisted t-shirt dresses, the boys in their character knitwear, both bouncing along in sneakers. The utilitarian khaki edge compounded the charming impression of doughty young adventurers, a hip-slung, slouchy little JW tribe.

There were adult details — the plissé of a skirt, the Dom Orejudos graphic on a sweater, the bands of ombré-ed sequins on a slender column of cotton — but Anderson insisted his own collection skews younger and less expensive than his work for Loewe. They do, however, share a similar cartoon-y, almost naïve quality which reads, in both instances, as supremely optimistic. That’s the new, uncomplicated Jonathan Anderson: the designer of happy clothes. All power to him.