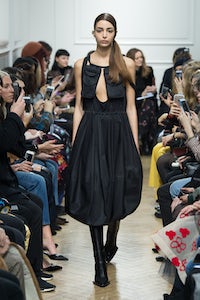 LONDON, United Kingdom — Jonathan Anderson can be fearlessly abstract when he talks about the clothes he’s just presented. On Saturday morning, for instance, he tried to describe how his show wasn’t the usual distinct look after look. Instead, it was quite specifically about one woman, brunette, with her hair pulled into a side pony. One individual’s story: “34 looks reduced to one fundamental snap picture you remember from it. The whole thing is one look.”

I felt like I'd need the compound eyes of a fly to comprehend such a notion, especially when what came down Anderson’s elegantly white-panelled runway seemed to embrace a wealth of proposals.

But maybe there was some logic in what he said. He called his new collection “a style odyssey”, Odysseys were classically voyages where the voyager had to find his way back home. Anderson talked about building from a starting point — a black dress, detailed, precise, with envelope pockets and a balloon skirt — to come all the way round, 32 looks later, to a similar skirt shape paired with a plain, flat-patterned cotton jersey top. “Ease, coolness,” he said. “It’s more digestible. I wasn’t trying to provoke myself.”

True, there have been many moments when Anderson’s self-provocation yielded puzzling complexities in cloth, but for a year at least, easiness has been the lasting impression from both his own collections and the ones he creates for Loewe, 12 a year in total. “Building it up, breaking it down,” he called it.

His new silhouette was fluid asymmetry, gorgeous in a shimmering metallic knit that was, Anderson said, “a sweater cut up into pieces and engineered as one material on a loom.” Artisanal craft has become more and more important to him. Unsurprisingly, given his experience with Loewe, it’s most evident in his use of skins, like the strap details here, or the leather shrugs, or the Wilma Flintstone skirt of layered skins.

Against that organic rawness, Anderson offered extremely sleek, synthetic pieces, or those peculiar collages of his that evoke a few eras all at once. Kate Moss sang Some Velvet Morning on the soundtrack. Her recombinant superpower seemed an appropriate counterpoint. Disco sparkle, glamour grunge (high-tops, not high-heels), the chain mail which will, in the annals of fashion, always be Versace’s, but used here against shearling or an incongruous rococo print and a froth of feathers. Breaking it down, remember?

From the sound of that, it's quite clear that Anderson’s "ease and coolness" still nursed a nub of challenge. “That’s ultimately the whole point of fashion — to challenge the things you have to get your head around to push forward,” he said. “I have to get up in the morning and be excited by it.” You can imagine his customers will be feeling the same way.