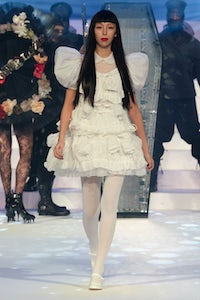 PARIS, France — Every story comes to an end, but it’s better when the protagonist writes the conclusion. Voluntarily retiring is a rare and noble gesture in fashion. After 50 years in the industry, Jean Paul Gaultier retired today, at the age of 67, with a deliriously amusing, 250-looks-and-counting smorgasbord of a show in the Theatre du Châtelet. (And what better place than a theatre to stage Gaultier’s last outing. The designer invented the concept of a fashion show as provocative entertainment.)

It was a never-ending mix of tableaux, music and fashion show all smashed into one exploding kitsch extravaganza, high on camp and proudly self-referential. There were all the familiar faces, from Boy George to Rossi de Palma to the models, still kicking but aged and, as such, it was slightly melancholic. There were all the familiar themes — from androgyny to corsetry, from sailor stripes to tattoos, from slashed tailoring to sex. In fact, archive pieces were repurposed to create new fashions. “Upcycled couture,” Gaultier called it, using the moment to remind the ever-forgetful fashion world that he was there first.

We were not there to judge — how can you, with a show like this? — but to savour the inventiveness, the humour and the showmanship. Ever the enfant terrible, Gaultier took his final bow decked in some very Super Mario denim overalls, laughing and cheering. As the epitome of a provocateur, he went out with a smile, convinced that fashion changes constantly. Chapeau!