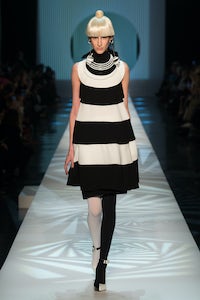 PARIS, France— Jean Paul Gaultier has a problem with the clock of the years. To fight the unforgiving passing of time, he keeps setting it backwards. The noisy and chaotic scene at the entrance of his shows has been the same, more or less, since the Eighties, when he was the system's darling and enfant terrible. The couture collections he present​ed​ under Gaultier Paris are heavily nostalgic, drenched with quintessentially ​French topics and clichés.

So, imagine the relief when the words "Hommage à Pierre Cardin" surfaced in the show notes today. A marriage between Cardin's futurism/modernism and Gaultier's sense of glamour and theatre sounds interesting on paper. Did it happen? Only in part, in a series of black and white looks that were angular but also sensual, and technically very inventive. It did not take long, however, until Gaultier's proclivity for camp kicked in, and the goings took a disco/carnival turn complete with jumpsuits, fringes and bright colours. Honestly, it looked like a missed opportunity to be back with a vengeance.