Luke and Lucie Meier are taking the brand’s defining tension — between freedom and discipline — to new heights of poignancy and precision. 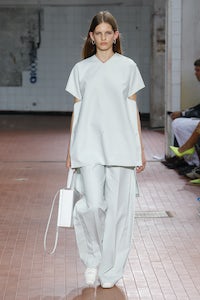 Luke and Lucie Meier are taking the brand’s defining tension — between freedom and discipline — to new heights of poignancy and precision.

MILAN, Italy – The face-off between freedom and discipline is an enduring theme in fashion and life. It’s rooted in basic human instinct, and so rarely gets tired. This is particularly true at Jil Sander. The brand has been built from day one on a soft and free idea of strictness. Luke and Lucie Meier, now in their third season as co-creative directors of the house, are bringing this defining contrast to new heights of poignancy and precision.

“This season we were thinking about uniforms,” they said backstage in their trademark pattern of Luke completing Lucie's sentences, and vice-versa. “There is something very constricting, but also very liberating about them.” This made for an impactful show full of soul and emotion. The light-drenched venue, with plants taking over concrete, certainly amplified the message, but it wasn't only a matter of set-up.

The Meiers’ work is extremely respectful of the Jil Sander codes but, paradoxically, it also avoids rigidity and blind orthodoxy. It's like the duo absorbed the language — the sharp lines, crisp fabrics and muted colours are exactly what you'd expect — only to play freely with it. The short hemlines and open-toe boots added a zing of sensuality, in a graphic way. Volumes were loose and playful, conveying a sophisticated pragmatism.

Their work is also well considered vis-a-vis the market: with Phoebe Philo out at Céline, there are plenty of women seeking a new source of easy, intelligent clothes. That's what Jil Sander delivers right now. Sometimes the Philo halo is palpable, but overall the brand is on a bright path. Well done.