For his latest JW Anderson collection, the designer presented a seductive, ingenious and necessary answer to the limitations imposed by catastrophe. 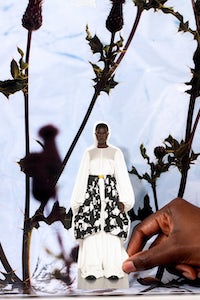 For his latest JW Anderson collection, the designer presented a seductive, ingenious and necessary answer to the limitations imposed by catastrophe.

After a Monday morning of Zooming about his latest show-in-a-box, Jonathan Anderson was feeling a little dismayed by his industry’s urgency to get back to the old ways. The solution to no-shows that he pioneered for his pre-collections has taken on a fabulous life of its own, but even though an “interesting” box seemed to be Milanese designers’ invitation of choice for the collections just shown there, many of them had also already been drawn back to the live format. Anderson found himself fielding questions about why he hadn’t followed suit, along the predictable lines of “Why are you still doing this when you could have done a show?”

The answer was obvious enough. Just look the gorgeous thing that showed up at my door. First, the wrapping paper printed with dialogue from Oscar Wilde’s “The Importance of Being Earnest.” Inside, a solid square cardboard box, inset with a gold coin, like a pirate’s doubloon embossed with a snail. Heads or snails? The box opened to reveal a thick sheaf of paper bolted together, like Thor’s ring binder, with page after page of digital colour tests. Slipped between them were pictures of the collection in miniature, and envelopes containing gorgeous cibachromes by Lewis Ronald of dune flowers in Brittany. (The images of the collection you’re seeing are many fingers holding those miniatures against Ronald’s photos.)

This box was more abstract than Anderson’s previous efforts, also more mysterious and meditative. Paging through the blank sheets of colour, coming upon the clothes here and there, it was just me and the clothes, one on one. None of the show-pony distraction of models parading metronomically backward and forward. Different, for sure, but these are different times. Anderson was grateful in a way: “It’s an exercise where I’ve been better able to explain what I do.”

At the same time, he confessed to confusion. “Fashion is meant to represent a moment. It’s YSL’s African show, or Marc Jacobs’s grunge show. But I don’t see the moment anymore. The whole thing has become fractured. It’s not even about clothing anymore.” No, it’s more about survival. Which Anderson acknowledged when he said the box had helped him focus too, on the codes that defined his brand. And here they were, distilled: concise, sensual, straightforward. “We’re going to survive through this,” he said determinedly.

Oscar Wilde meant more to the collection than the wrapping paper. His mastery of double meanings, the frivolous/serious, was fundamental to Anderson this season. “I would never have had the time before to think of putting meaning into things,” he said. The small but telling detail, for instance, of feather-trimmed mirror earrings that were based on the mirrors in a budgie’s cage which keep the bird from getting lonely. We’ve all been budgies in the cage of quarantine and Zoom has been our mirror. There was a defined dialogue between control and abandon: the strong lines of a trench or a cargo coat in khaki gabardine, versus a lushly embroidered silk jersey top, with the faintest degradé of a tea-dyed hem and a trail of feathers, or a pristine White Witch dress, with a funnel of lace knit framing the face. But there was also loveliness, plain and simple, in jacquarded shorts suits. Oscar Wilde specialised in transformations (“Dorian Gray” the most famous of all) and there was something of that magic here. I’ve always thought Anderson was a teller of fashion fairytales. Check out those collection images again.

Anderson introduced his latest box with an aphorism from the ever-quotable Wilde: “The secret of life is in art.” I was equally drawn to words from the designer’s collaborator Lewis Ronald. “Making art is like finding a shortcut…finding something new in the middle of something known.” That was Anderson’s box in a nutshell: a seductive, ingenious and necessary answer to the limitations imposed by catastrophe. With clothes to match.