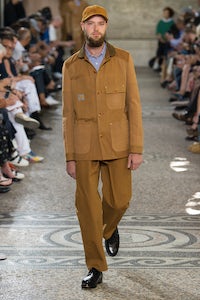 PARIS, France — Youth is a glittering treasure – never more so than on the Spring 2018 boyswear circuit - but sometimes it’s a joy to spend time at a menswear show with well-seasoned men, especially when they’re wearing clothes you want to drag off their back and exit the building with, stat. Junya Watanabe streetcast a small crowd of characters that you could project any number of scenarios onto. I know for a fact one was a comedian, but all of them looked good with their hands, and that was the story Junya was telling. You gotta work.

The invitation was a piece of corrugated brown cardboard. If the collection was scarcely a break with the designer’s tradition of collaboration with salt-of-the-earth labels like Carhartt, Northface and Levi’s, the sturdy cotton patchworks (in brown! even sturdier!) and the jackets collaged from mattress-ticking stripes still looked better than ever (maybe by dint of contrast with everything else that has been happening in menswear over the past few weeks). And, however prosaic it may appear, there is always a fierce ingenuity in Junya’s work. Here, parkas branded North Face cleverly incorporated Karrimor backpacks. And a khaki peacoat had a handle on the back. Now that’s convenience.

But beyond ingenuity, this collection was also a celebration of utilitarian aesthetics. Some of the models wore painter’s pants. So some of those pants – and jackets and coats – were smeared with paint. A work jacket, blossoming with explosions of colour, was the piece of the season, to these eyes at least. Making something functional into a thing of beauty – that strikes me as fashion’s highest achievement. The soundtrack recognized a similar alchemy, with a string of classic R&B tracks. So did the contribution of Alan Kitching, who turned letterpress into an art form.