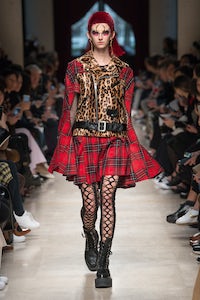 PARIS, France — There are few riffs more calculated to make you get off your ass and strut than the one that launches T.Rex’s 20th Century Boy. To hear Marc Bolan’s guitar firing the first salvo at Junya Watanabe’s show on Saturday morning was to double-take into major neck dislocation.  But really, what other sound made sense with what Junya showed? The sheer Dionysian release of Bolan’s music conveyed the same feeling of gleeful abandon that powered Watanabe’s collection.

Decades ago, he magicked his first collection out of the detritus of London flea markets: curtains, sofa covers, old coats. His latest work was motivated by the same DIY spirit. Collisions of tartan and leopard print, fishnet body stockings, crocheted tights. Hair hacked and dyed.

It was punk, but it was also glam, both of them youth cults that delighted in flagrant display which spat in the face of the grey men who ran governments that helped no one, who drove humanity into the ground.  The nothing-to-lose ethos of those brilliant kids turned Ziggy Stardust and Johnny Rotten into cultural icons.  Watanabe remembered them in his new collection. The first model in the red Ziggy mullet with the disc suspended on her forehead…was that not an echo of a classic Bowie image?

Glam and punk in the UK were potent touchstones for Japanese designers. I can’t think of one who wasn’t touched in some way by them. Island nations, hands across the water yadda yadda. Watanabe honoured his design roots with a print featuring the “Union High Back” chair by London-based furniture design company Jimmie Martin. And if that wasn’t arcane enough, he also mutated glam/punk’s visual iconography with his own recent explorations of pure polyhedral form, all those pointy bits and pieces that glossed the past with the techno-future. It was sensational, especially when the fractal collages of fabric folded inwards like insects’ wings. Watanabe’s women could have been extraordinary birds, waiting to take flight.

And that was the relentlessly upbeat mood of his show.  Glam and punk assumed their gorgeous forms in moments of particular political darkness in the UK. If, superficially, they seemed to embrace dystopia (Ziggy sang, “Five years, that’s all we’ve got.”) they were also a celebration of survival, a rise-above-it-all indefatigability, a you-go-girl-and-boy defiance.

Watanabe’s soundtrack included Trent Reznor and Karen O’s version of Led Zeppelin’s Immigrant Song.  In the Trumposphere, that needs no further comment.  We also heard T.Rex’s fabulous exhortation Children of the Revolution.  Called to the barricades by Marc Bolan? Bliss was it in that dawn to be alive, but to be young was very heaven…