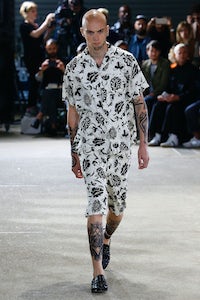 PARIS, France — What’s it like to be Junya Watanabe? He’s a cultural historian, trawling through social sub-currents to pluck out a single gleaming fish of inspiration. Picture him alighting on tattoo-ed gangsters — not the big boss, just the henchmen — who were the characters he cast for his Spring/Summer 2017 collection.

For the first time ever, Watanabe was even ready to be a little more forthcoming about his source material: Black Cat, White Cat, a 1998 award-winner from perennial critic’s favourite Emir Kusturica. If he was hoping the humour of that movie would infuse his collection, he was aiming too high, but there was certainly a fast-paced feistiness to the show.

A lot of that had to do with the soundtrack, packed with shouty tracks from Plastic People of the Universe, who were Vaclav Havel’s favourite band back in the day of Czechoslovakia’s Velvet Revolution. Elaborating on the Eastern European theme, Watanabe used posters from Polish artist Bronislaw Zelek as the main graphic element, printed or woven, in the collection. And the ghost of Poland’s James Dean, Zbigniew Cybulski, hovered over the leather jackets. (Some of them were pleather, but not enough to make a statement, at which point you have to wonder, why fake it?).

That whole aesthetic was a touchstone for the Manhattan downtowners who made the Mudd Club into a cultural crucible in the early 1980s. There’s a tweaky little alt-punk thing nibbling at the edges of fashion right now. So maybe this was Watanabe’s Mudd Club collection. 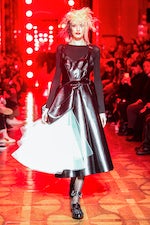 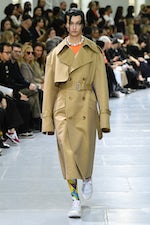 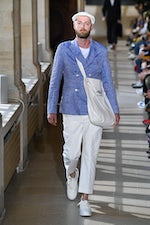 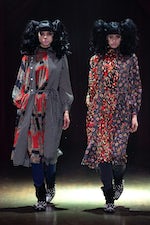