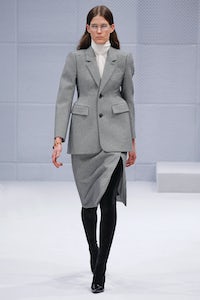 PARIS, France — The venue for Demna Gvasalia’s debut as Balenciaga’s new artistic director on Sunday morning was a huge television studio. Its padded white walls sealed in the specially composed beats, a soundtrack so sonorous that it punched deep into the gut, moved molecules around, reshaped the air, an aural counterpoint to the way Gvasalia’s designs reshaped Autumn/Winter 2016.

The other night after his Vetements show, he was rhapsodising about the endless possibilities that proportion offered a designer. There, Gvasalia was challenging conventional notions of form. Here, he had only to absorb the lessons of the grand master Cristobal, the couturier whose search for transcendence through cloth brought fashion closer to art than any other designer managed to do, before or since.

The revelation of Sunday’s presentation was Gvasalia’s ability to translate the essence of Balenciaga’s couture into a ready-to-wear collection without diminishing its purity or its emotional charge. It had the rightness of something we’ve been waiting to see forever. And it immediately cast a giant shadow over the entire season.

Attitude is all with Gvasalia. The tailoring which opened the show featured light padding that pushed the hips forward and the shoulders back, instantly establishing an elegant authority, not just Gvasalia’s but also for the women wearing the clothes. Later there were pencil skirts with a kick pleat in the front, which similarly shoved the body forward.

Classic sportswear pieces were transfigured with another couture trope, the portrait neckline, with anoraks, parkas, puffas, trenches and bombers pulled back off the shoulders to gracefully highlight the sternum. It looked like something a stylist might do for effect, but Gvasalia said it was built into “the architecture of the garment.”

He was inspired by Cristobal Balenciaga’s way of working with his clients, 360 degrees in the round. (Again, the sound reflected that idea, pulsing right around the room in bursts. A single giant speaker rotated furiously, mesmerisingly in the centre of the ceiling.)

The edifying plainness of the hair and non-makeup underscored the rigour of the show’s opening passages, but these were shortly replaced by flowing fantasy florals over candy-striped stockings, and gilded floral brocades and strapless dresses which could pass for contemporary variants of dressier items from the annals of Cristobal. And they were co-opted by coats whose sensible, utilitarian nature was emphasised by the Laundromat bags carried by the models.

It was obvious that Gvasalia was offering a complete, thought-out wardrobe, the same way that Balenciaga would craft everything from evening gowns to gardening clothes for clients like Mona von Bismarck.

“It’s important to know the past to feel the future,” he said after his show, “but you can’t drive a car looking in the rear-view mirror.” History needs the here and now, and there’s scarcely anything more present in fashion right now than Vetements. But Gvasalia’s fusion of past and present was so alchemical that the mutant streetwear which has been his calling card at Vetements was elevated, elegantly transmuted by the influence of classic couture.

In Gvasalia’s own mind, there was a clear continuity: the last model in the Vetements show was the first model in the Balenciaga show. It’s all part of a process — grunge to glory. This is going to be fun. 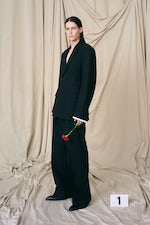 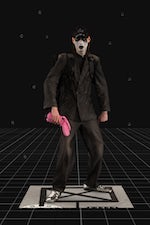 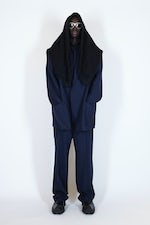 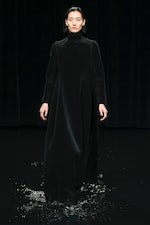