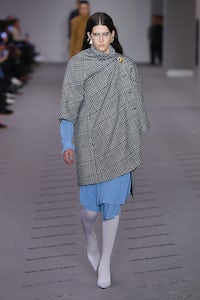 PARIS, France — The massive soulless space where Balenciaga showed on Sunday morning had all the charm of an underground carpark. It is, in fact, a room for extremely big conferences. That fit with the interest Demna Gvasalia showed in the corporate world in the menswear collection he presented in January. He carried it through into his womenswear: “power dressing — that is what I want Balenciaga to stand for,” he declared. “When women wear these clothes, they feel the notion of standing straight…but there’s still that cool element. Vetements is based on that, but it’s from the street. This is the opposite.”

Straight went both ways here: physical posture, and convention. So the Balenciaga woman stood straight in skirts and coats cut from classic boardroom suitings which were rendered cool with Gvasalia’s signature twists. In his trawl through three decades of Cristobal Balenciaga’s archives, he’d noticed how often the women in the photos clutched their coat or jacket to one shoulder, a vulnerable gesture that also struck him as “very madame, very retro," he said. "I wanted to work on it in a different way, make it more 'today.' So I constructed it into the garment.” The original gesture was duplicated through cut and closings (though the pieces can also be worn in the normal way). That such a curious observation could become the foundation stone of a collection — Gvasalia did it before with the off-the-shoulder effect in his first season at Balenciaga — has become a marker in his work.

Call it vision if you like. It transfigures even the most banal idea. Here, for instance, there were silk shirts (some of them button-down straight) which featured back panels that looked like part of a bullet-proof vest. It was a graphic manifestation of the clichéd notion that you have to watch your back in the corporate world. The same panels were cut from the rubber matting used in car interiors. which also showed up as pencil skirts, the kind of elegant subversion of orthodoxy that Martin Margiela (in whose Maison Gvasalia perfected his craft) pioneered so brilliantly. “I love that clothes can make people think,” Gvasalia said, “maybe about something not even clothes-related. We need to question things. If we don’t do that today, we’re doomed.”

There’ll probably always be those who attribute cynicism to Gvasalia’s appropriations, but what was consolidated in this new collection was a persuasive passion for what he does — and a pragmatic optimism. “This space I associate with hope,” he said of his unpromising show venue. “It’s so big and airy, and you could see someone on the other side, but not really who it is. Hope is what I’m looking for.” There's another question for you: did he hope we would meet those people on the other side of the ocean of Balenciaga-branded carpet? Us and Them bonding?

Symbolism aside, a more tangible — and comprehensible — expression of optimism was the passage of eveningwear Gvasalia showed for his finale. It’s Balenciaga’s 100th anniversary, but this house that was once the apogee of haute couture hasn’t showed any since Cristobal himself locked his door and walked away in 1968. “We have this amazing atelier and we didn’t do it,” Gvasalia explained, “So I thought it was an opportunity to make couture, to have fun, to learn.”

Following his immersion in the archives, he chose nine of the master’s most iconic shapes. They will be produced in the classic way, one of a kind, never the same dress twice. His initial impulse was subversion, to twist and cut and turn them inside out. “Then we thought why, it looks best just the way it is.” Gorgeous case in point: the ivory amphora dress, adored with flowers. But that wasn’t enough. “I realized they had to stay pure but they needed me in them,” Gvasalia said. So he added a “Demna-ism": one of the huge Laundromat bags that has become a signature accessory, matched to each dress. The ostrich feather one will look a treat on the high street. Again, the transformative vision.

One more thing Gvasalia felt was missing was pockets. “So we put in really big ones you can really put your hands in, because that creates a gesture. The woman is not walking like 'that,' she’s walking like a soldier. Because today, we are all soldiers.” The practical, the positive and the surreal twist - Demna Gvasalia's reasons to be cheerful on fashion's front line.