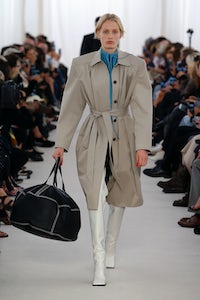 PARIS, France — During his Balenciaga research, Demna Gvasalia came across a fabulous fashion synchronicity: 1958, the year when Cristobal Balenciaga developed the silk organza gazar which became his signature fabric, was also the year Spandex was invented.

The ultimate body-conscious fabric vs. the ultimate couture fabric — that played straight into Gvasalia and his co-conspirators thinking long and hard about the parallels between couture and fetishism: the importance of the feel of fabric on skin, the excessive desire for something that drives both (even more acute when the object is denied — See Now Buy Now doesn’t work in this scenario).

“It’s part of my creative process to analyse things and question them,” said Gvasalia. That train of thought has transformed fashion’s silhouette.

Gvasalia has channelled that desire to dazzling effect. Vetements is the hottest label in fashion, and, on the evidence of the collection he showed on Sunday afternoon, it won’t be long before Balenciaga catches up. Gvasalia’s respect for Cristobal Balenciaga is a thing of wonder. He studded his show with jewellery from the archives, pieces that Cristobal himself probably touched.  “It was a poetic reference,” he said, “I wanted him to be present in this collection.”   There were other Cristobal touches, “transformer” items, like the skirt that became a dress, or the Spandex pieces that could be turned into halternecks. And the opulent drape of this collection felt very true to the original spirit of the house.

But ultimately, it was the Demna-isms that made this show. “It’s part of my creative process to analyse things and question them,” he said.  That train of thought has transformed fashion’s silhouette. Here, it was so elongated by the Spandex boot/pants that ran from toe to waist you were afraid the models would snap like a rubber band.

The broad shoulders that were such a striking revision of the 1980s in Balenciaga’s men’s collection in June (the blueprint of Claude Montana, the greatest designer of that decade, remains curiously resistible as far as revivals go) had been masterfully evolved, lightened, sharpened, de-boxed.

And then there were those florals. I think they’re like visual Muzak (Muzak is clearly something Gvasalia is not averse to — the soundtrack gave us the easy listening of vocal-less versions of Wicked Games and Careless Whispers), but recontextualised as head-to-toe looks, they’re reclaimed in the crucible of Gvasalia’s fashion alchemy, just like all those death metal tees before them.

Speaking of wicked games, there’s an irresistible sense with the Gvasalia brothers and their crew of likeminded sprites that life is just that for them. Off to Berghain for the weekend! Here, it wasn’t just the perverse fetishistic tug — the clammy latex cape, the life preserver that distilled couture quilting, those Spandex boots (“You’re constrained in your garment,” Gvasalia observed). It was also the colours, vivid comic book shades translated into a distinctly adult world (Kinga Rajzak made a very grown-up Little Red Riding Hood), and the accessories, particularly a big pumpkin of a bag that banged awkwardly against the models’ legs as they walked. It made you think. Analyse? Question?

But Gvasalia is not just a thinker.  He listens too. One criticism of his shows has been their lack of diversity. For his latest, none other than Alek Wek returned to the catwalk.