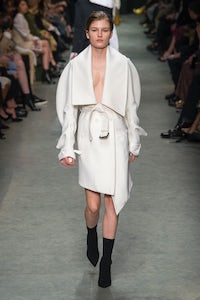 LONDON, United Kingdom — “It’s an important moment to have joy in your work, to believe in something.” Christopher Bailey was adamant after the Burberry show on Monday night. “And I believe in this. I did it with absolute passion and integrity for someone I’ve loved and admired my whole conscious life.”

He was talking about the inspiration his collection took from the work of sculptor Henry Moore, whose abstract, undulating bronze forms are some of the most familiar manifestations of “modern” art. Some of them were on display in Maker’s House, the venue for the Burberry show.

Bailey grew up near the sculpture park where his fellow Yorkshireman’s work was on permanent display, so Moore has always been part of his life. He worked with the artist’s daughter and foundation, with full access to Moore’s private work and studios. It was such a thrill that he insisted he shouldn’t have been paid for it.

But how do you translate such ardour to a fashion catwalk? Maybe it was an impossible challenge. Years ago, Bailey exercised his fanboyishness with quirky collections inspired by Davids Hockney and Gill, and there was the same intensely personal aspect in this new outing.

But those earlier presentations were before Burberry became the megabillions digital fashion beast that it is today. Now it’s a huge mouth to feed, and Monday’s presentation was a flavour it may take some getting used to.

Moore was all over it: the odd proportions, shrunken here, expanded there; the unconventional way clothes wrapped the body to alter its shape; the asymmetry; the de- and re-construction; the monochrome colour palette, interrupted only by tumble-dyed drill workwear that echoed the sculptor’s own studio clothes.

All of which applied equally to menswear and womenswear, and very little of which looked like the Burberry Bailey has carefully crafted over the past decade. No, not true — it looked like bits of that Burberry waywardly stitched together, a jacket with a shearling front and cableknit back, for instance, or a fragment of sweater binding a striped shirt which functioned as a dress.

Even with the obvious stylist’s indulgences, there were moments where I was discombobulatingly reminded of very old Comme des Garcons. But that sense of dislocation was as calculated as the new mode of presentation: Maker’s House dramatically stripped back to raw industrial space, the usual bucolic singer-songwriter soundtrack replaced by Anna Calvi’s electrified wailing.

It felt theatrical for Burberry – and that was without a finale which marched the models down the catwalk in dozens of Shakespearean neckpieces: huge frilly ruffs, fringed or chandelier-ed capelets, Joan of Arc hoods, passementerie dripping pearls and on and on into costume-y excess. It was kind of fabulous, like the Bright Young Things at their most dress-up-exhibitionistic, but it left me bemused by the signals Christopher Bailey was sending. A new direction? Perhaps. Defiance? Absolutely.