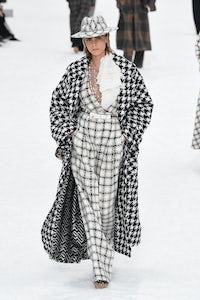 PARIS, France — Karl Lagerfeld always claimed that the minute one Chanel show was done, he’d start on the next. That was easy to believe, given the scale of his presentations. You could imagine teams of people beavering away for months. So he’d have signed off on the Alpine village set for his last hurrah on Tuesday in the Grand Palais a long time before his death was announced on February 19. Likewise, the clothes. Maybe it was only his longtime musical collaborator Michel Gaubert who would have had the leeway to adjust the soundtrack in the wake of his passing: soaring, spiritual Philip Glass, and a last grace note of Bowie’s “Heroes,” same as the Fendi show in Milan.

And that is where I finally lost it. The thought that Karl Lagerfeld is no more resonated with crystal clarity against the last backdrop he would ever conceptualise, the last collection of clothes he would ever create, whatever the truth of the rumours that he’d hedged his mortality by designing a clutch of collections to tide Chanel over. Lagerfeld clearly wasn’t one for goodbyes. Anyone who saw him in his last days remarked on the determined non-finality of their exchange. If his last phone call was indeed with Silvia Fendi, it was about work, not sayonara.

And so it was with this collection. Ironically, the entire opening section – the huge soft coats, the exploded houndstooths, voluminous trousers and enveloping knits – offered a fresh take on Chanel classics, a playful throwback to the golden era when Linda, Christy, Naomi and Claudia would accessorise their appearance on the catwalks of the Carrousel du Louvre with skis or surfboards, depending on the season.

Those were the days before the imperial vision that came to define a Chanel show. I have to thank my colleague Jo Ellison for her insight into Lagerfeld’s last gasp. She felt the Alpine village might be his Rosebud, the key that would unlock the mystery of his extraordinarily protean talent. I can’t speak to that, I’m not familiar enough with the details of Lagerfeld’s childhood. But the notion of him as fashion’s Charles Foster Kane was irresistible. The self-mythologist. The empire-builder. The man who was infinitely curious about things to come.

And so I shed a tear as “Heroes” played. For Karl, whose curiosity would now be unsatisfied for eternity. For Bowie, equally denied his opportunity to see what's next. And for me and every single person in the huge crowd that filled the Grand Palais on Tuesday. Ultimately, the future eludes us all. We're born, we die. And we should be so lucky as to fill the intervening years with as much as Karl Lagerfeld achieved.