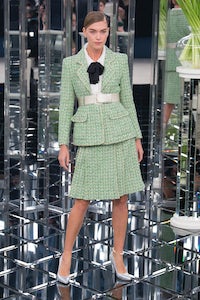 PARIS, France — The Grand Palais swallowed the Rue Cambon on Tuesday morning, the towering vases of arum lilies, the mirrored walls and floors duplicating the heartland of Chanel. And the clothes took up the mirrored motif as well. This was Karl Lagerfeld in a literally reflective mood.

He never looks back. Nostalgia is anathema to him. Still, the sense of the reflective in this collection was figurative, as well as literal. Jackie Kennedy, who was wearing Chanel the day her husband was assassinated, has re-entered public consciousness through Natalie Portman’s Oscar-nominated performance. (In fact, Chanel assisted with the costuming of the film.) And the most famous First Lady of all time’s polished, besuited, behatted precision was echoed in the presentation’s first looks. Equally, there was a strong (strong-eyebrowed, sleek-haired) echo of Delphine Seyrig in Last Year at Marienbad, the 1961 movie which Chanel dressed, and which Lagerfeld saluted in his Spring 2011 collection for the house. The snowdrifts of feathers that rounded out the show harked back to it.

But Lagerfeld told press the other day that his specific inspiration for this new collection was actually Spoon Woman, a 1926 bronze by Chanel’s friend Alberto Giacometti. So the new silhouette emphasised the hip, like the softly rounded bowl of a spoon, which had the effect of raising the waist. It was emphasised by a belt (most often in silver) in almost every look, which will impel a shape for couture customers. And that, in turn, underscored the feeling that the collection reached out to more women than the gilded young that Lagerfeld has been addressing of late. In fact, it was the most sophisticated interpretation of the Chanel heritage that he has shown in recent memory, a reminder of a moment in time when the classic Chanel look was emblematic of a modern, independent Everywoman (at least in aspiration, if not income). Again, reflection.

And also opportunity. Lagerfeld has made it clear he is happy to dress the new First Lady. With its pale colour palette and tailored silhouettes, his new collection couldn’t have been more appropriate for a woman who seems to be casting an astute eye over Jackie Kennedy’s approach to dressing for The Job. Chanel herself made an art of opportunism. So this would be one more gimlet-eyed chapter in that history.