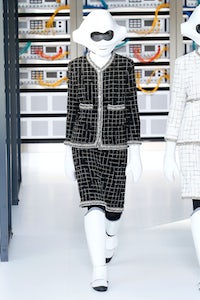 PARIS, France — “Intimate Technology.” Karl Lagerfeld pronounced those words with great relish after showing his Spring collection for Chanel on Tuesday morning. In practice, they could be taken to mean the cyber-tweeds layered over pale, filmy lingerie, worlds colliding in a way that Lagerfeld has always loved.

It was the kind of elision that only he would be capable of, simultaneously versed in the ways of the Old World and infatuated by whatever’s about to happen next.

The show took place against the Chanel Data Centre, a gigantic simulation of one of those facilities you imagine buried deep in the heartland of the USA or Russia, where every call, every purchase, every download that anyone makes is processed and stored. It’s a fascistic notion, which Lagerfeld seemed to acknowledge by sending out a couple of CocoBots to open the show.

But what immediately followed — yet another reconceptualisation of the classic Chanel tweed — was actually fresh and charming. If we’re all living in the Matrix (Scientific American published a piece which proved that may be perfectly possible), it didn’t look as dystopian as I remember. In fact, Karl Lagerfeld has seen the future and it’s pink. Chanel has already pushed fabric technology to the limit, but, here, the designer’s celebration of all things digital was the collection’s raison d’être. It was like the candy-coloured wiring of a million circuit boards had been untangled and rewoven.

“It’s up to us to put the soul in the machine,” Lagerfeld declared. Maybe that’s what the lingerie underpinnings were all about, a sensual, human layer underneath the techno flights of fabric fancy. “It’s not Belle Époque,” he insisted. But even if it was, it would be a sweet idea to have in mind when confronting the realities of an époque that is rather more bête.