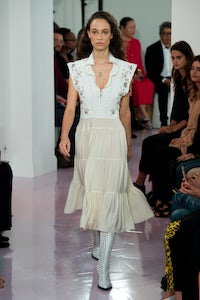 PARIS, France — In fashion legend, the Chloé girl is a creature from a fairy tale. She stands for pure, romantic femininity. But Natacha Ramsay-Levi, newly ascended to the creative directorship of the house, has other ideas. “She has cracks,” she declared after her spectacular debut on Thursday morning. Her invitation was a box of matches, an ordinary little object you’ll find in any home. Ramsay-Levi used to collect them. But mishandle matches, and you’re playing with fire.

And so there was a fascinating tension in the collection. Ramsay-Levi gave the sweetness of Chloé – smocks, dropped waists, trumpet sleeves, fluted hems, eyelets – a slightly eerie edge. Like the grommet-trimmed tears in a virginal cotton bodice; the folkloric symbology of the Indian artist Rithika Merchant she used in prints; the strips of studs that weighed the hems and necklines of girly-girl floral dresses; the epic mesh and sequin-strewn gowns at the end. (High priestess garb!) Some of the models wore delicate knuckledusters. ‘O’, symbol of infinity, made frequent phantom appearances on the clothes.

Ramsay-Levi is a history buff. She talked about “different civilisations, souvenirs of the past.” You could see anything from prairie skirts to Victorian linens to antique Barbary gold in her collection. There was a tomboyishness in the tailoring, and the pony-girl embroidered horses, and there was something of the rock chick in the cropped, top-stitched jeans and python pieces (the Chloé girl has priors here), but watching Ramsay-Levi handle the crowd of well-wishers after the show (and she is clearly a local heroine), it was obvious how much of the new Chloé girl is her. If there’s been a lot of talk about her 15-year apprenticeship with Nicolas Ghesquière, she was nothing but her own woman with this debut. Cracks and all.