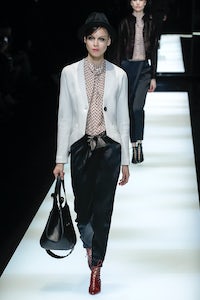 MILAN, Italy — Giorgio Armani wracked up an impressive score on Oscar night: by my count, five actors, four actresses wearing his designs, including winner Viola Davis in a column of siren red. The collection he showed in Milan the following morning dialled down the Hollywood glamour in favour of a more gamine spirit: the models in cropped jackets and pants, pert little trilbies topping boy cuts. Some wore big urchin coats, gathered and pintucked round the torso, or voluminous apron-like skirts. The effect was slightly antique, like we were looking at characters in a play. You could imagine them in sepia.

But Armani countered that with intense colour, red, purple, apple green in plush velvet. Plus shine: a landscape of lamé across one coat, swathes of pavé sequins lighting up those little jackets as the show wended its way towards the end. And therein lay the rub. The designer could have made an impactful edit from the 80-plus looks he showed. There was a strong story to be winkled out of the passing parade on the runway, perhaps something that progressed from his soft velvet tailoring, to the satin skirts with sequinned bodices in dense Vorticist patterns, to a couple of the tubular gowns that closed the show. That story had a rich, decadent edge that would have lingered in the memory, unhindered by the many other things in which it was mired on Monday morning.