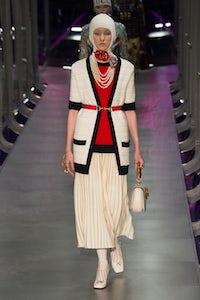 MILAN, Italy — Paul Hanlon was crying. It was partly exhaustion. For a week, he’d been working with a team of 45 on the hair for the Gucci show. But now it was over, and he’d been hit hard by the sensation that never again would he feel the way he was feeling. “I’ve said everything I wanted to say in one show.”

Hanlon can’t have been the only person who felt that same sense of completeness, whether they’d been working backstage, or sitting out front in the audience. The 119 looks for men and women that Alessandro Michele showed rolled the universe into a ball. (OK, I’m stealing that line from Leonard Bernstein — he was talking about Sgt Pepper, but I kinda feel we just saw a fashion equivalent.)

The 119 looks for men and women that Alessandro Michele showed rolled the universe into a ball.

Michele insisted he didn’t intend to show so much, but when he started his edit, the needs of the story he wanted to tell simply took precedent. More was more was more. He was thinking about alchemy, not only the fashion alchemy we see every day (if we’re lucky) where fabric gets magicked into a design for living, but the real old school stuff, where seekers would pursue the most arcane byways of ancient lore in their quest to turn brass into gold.

“The one thing I really love to go against is the idea that you need fashion rules,” Michele said. “After so many years working in fashion, you don’t have to think anymore if it’s fashion or not. Just do something that belongs to you. And what belongs to me is that I can pick up different things and let them talk, like the alchemist. You take things that apparently have no voice — very trashy stuff from LA, odd things from England, Italian aesthetics, what young guys and girls love — and after, they become gold.”

You could winkle out looks which stood for each of those elements: a slinky black dress with a Hollywood Film Noir tinge, an Oscar-Wildean dandy, an ornate smoking robe that arch-aesthete and decadent Gabriele D’Annunzio would have sold his mother for, and a plethora of ironic youth cult details (the rock t-shirt incarnate in a Gucci-meets-AC/DC moment).

What belongs to me is picking up different things and letting them talk, like the alchemist.

It’s in that in-between state where Michele’s creativity blossoms most gloriously, to counteract “the deadly rigidity of dichotomous thought” (to quote from Gucci’s now-legendarily obtuse, but actually quite straightforward — if you stop and think for a while, with a thesaurus at your elbow — show notes).

Maybe it clarifies the situation to note that the show opened with a creamy pearl-strung knit look that had the airiness of Chanel-in-Deauville, and closed with a heavily studded black leather biker vest embroidered with a lepidopterist’s collection of bugs.

It’s in that in-between state where Michele’s creativity blossoms most gloriously.

For all the ultimate futility of trying to parse such profligacy, it was diverting to decode the arcane messages that Michele continues to weave into his clothing. CHIROPTERA: they’re bats, the latest creature to join the Gucci menagerie. SCARABAEIDAE: scarab beetles, likewise. AMMALIUM: living things. BIDDENDEN: best I could do was a vineyard in Kent, until I realised that it’s the street address of SISSINGHURST, the castle where Vita Sackville-West, the sister of Virginia Woolf, created one of England’s most famous gardens.

“I was thinking of a garden, where I can pick everything I need to make gold,” Michele said. “But I was also obsessed with those women, and the way they were obsessed with culture.” When I told Michele his words reminded me of Christian Lacroix, who was similarly absorbed by the sisters and their circle of friends, he mentioned a pair of earrings in the show, inspired by ones worn by Elizabeth I in a painting he’d seen. “I wanted something that looked like Christian Lacroix jewels.” Lacroix? Michele? The thought of that through line thrilled me.

I can’t imagine there’d be many people who’d dispute the notion that Alessandro Michele has turned himself into pure gold.

The presentation was actually called The Alchemist’s Garden, which sent those notorious show-notes into an extravagant tizzy of fawning over flora. (Every bloom and beastie that featured in the show got a mention.) But there is a theory about alchemy that seems curiously appropriate to Michele’s tenure at Gucci. It’s been suggested by some that the alchemist’s mysterious quest to turn base metal into something precious was actually a metaphor for the transfiguration of the self.

After Wednesday’s offering, I can’t imagine there’d be many people who’d dispute the notion that Alessandro Michele has turned himself into pure gold.