Once more Alessandro Michele made magic, but the spell is changing. 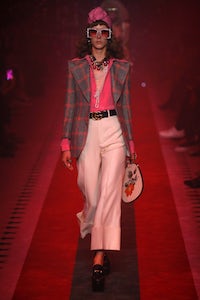 Once more Alessandro Michele made magic, but the spell is changing.

MILAN, Italy — Phantasmagoria is one of the most glorious words in the English language. But it’s not been a fashion word — like iconic, classic and effortless are fashion words — until now, when it cropped up —where else? — in the press notes for Alessandro Michele’s new collection for Gucci.

Because how else could you describe a show that was truly like something viewed through the veils of a dream? The room was thick with a red mist, which drained colour but heightened sensation. The walls quivered with mirrored gold tiles. A Machine-less Florence intoned William Blake poetry on the portentous soundtrack. And the catwalk carpet was like a yellow brick road, except one that was woven from Gucci stripes.

Yellow brick roads lead not only to Oz but to Elton. Backstage, Michele had a lot to say about the superstar’s presence in the collection. “He’s like a firework,” the designer enthused. “He’s the God of music, pop but also very sophisticated.” Deities were on his mind. “We are animals, animals are gods, beauty is God.”

Michele waxed lyrical about the “contamination” that this torrent of ideas brought to his own concept of fashion, not only Elton’s bling, but Venice in the 18th century and Asia — always Asia and its animal gods — and his latest passion, Hollywood. “I’ve changed my mind about it,” he admitted. Maybe that’s what a night at the Oscars with new bestie Jared Leto will do for you.

But Michele’s translation of Hollywood onto the Gucci catwalk was as phantasmagoric as you might expect, more the stunning stylised gowns of the movie capital’s haute days when stars were screen goddesses, Joan Crawford in dresses by Adrian, for instance. The sportswear Michele showed also had the extreme decorative-rather-than-high- performance edge of movie deities at play in Hollywood’s heyday, like the lady golfer’s tweedy tank with matching plus fours trimmed in Gucci stripe that closed the show, or the satin baseball suit with what looked like huge beaded poppies embroidered on its front.

There was something so knowingly funny ha-ha about such outfits that you could almost credit the smoke and mirrors of the show’s presentation to the same acute awareness on Michele’s part of the fashion insiders’ susurration that is already whispering, “It’s just more of the same,” with the wacky eyewear, the embroidered beasts, the cotillion-on-Mars dresses, the ambisextrous tone and the by-now-expected unexpected injection of fairytales into the everyday. Yes, smoke and mirrors are all an illusion, but Michele isn’t following in the footsteps of the Wizard of Oz’s empty trickery.  "Like a musician, I need more and more notes," he said after his show. "Otherwise the music stops."

The thorough Guccification of the audience at his show confirmed just how seductive the tune he is playing has become. Fact is, when Michele looks behind the wizard's curtain, he sees another dimension.  And so, through his eyes, do we. Which means that, in keeping with his newfound affection for Hollywood — and in the same vein as the red-misted set and red-walled backstage — it seems fair enough to link Michele to a filmic genius who shares the same appetite for rapture through rupture. Next time you get a chance, re-visit Twin Peaks, where David Lynch’s phantasmagoric dream comes to a head in the Red Room.