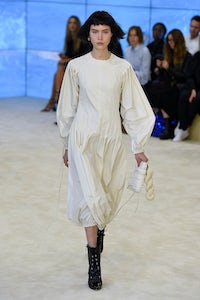 PARIS, France — Jonathan Anderson equates modern living with eclecticism. In his own life, he can’t stop curating objects from any time or place. Then he has to repaint the rooms where he puts them. It’s that same obsession which makes his collections such an endlessly fascinating distillation of his ideas about clothes: how to wear them, what they mean, when they mean it. In other words, the importance of context.

Anderson’s experience as creative director of Loewe has been a golden opportunity to explore all that, if only because it’s given him the means. The set for Friday morning’s show was decorated with Noguchi lamps, antique moon jars from Korea, Edmund de Waal porcelain, Gaetano Pesce chairs and a massive video wallpiece by Dutch artist Magali Reus, which showed boys effortfully rolling oil barrels out of the ocean. All very blue, because Anderson felt the sea made a nice backdrop for the show, though he also thought the video on endless repeat made a smart metaphor for “the never-ending task of building a brand.”

So much for the window-dressing. But the clothes and accessories were also a heady stew of idiosyncratic references. The silhouettes were sensational: big drawstrung bubbles of fabric, lean, drape-y t-shirt tiers, scarf-pointed dresses, gypsy, hippie, free spirit sewing dyed tablecloths together to make a swirly thing. Loewe being a Spanish label, let’s resurrect the image Anderson summoned up for his own collection — girls dancing round a fire on a beach in Ibiza. And in the mountain villages of the Balearics, there’d be women tatting and fringing pieces in raw linen or cotton, maybe unwittingly adding some flamenco flounce. Anderson wasn’t into the polished finish, preferring seams whose threads trailed earthwards, “connecting with the ground.” He felt that was freer, more feminine. “Sometimes things are never finished.”

Last season there were big cat pendants. This season, it was bats, good luck in China. Loewe’s business is traditionally leather, so there was some irony in the fact that the collection’s best bag was a tapestry confection, though there were plenty of others — almost equally alluring — to choose from. Anderson’s sideways glance (the Loewe version of the Henry VIII sleeves in his own collection) was a random injection of Chinoiserie, prints of pagodas and herons. It’s tantalising to think that his fans wait for him to go off piste like that. Which means, in essence, the sky’s the limit.