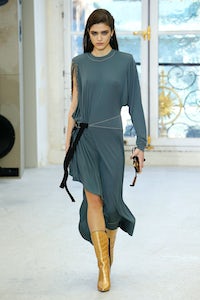 PARIS, France — It was something of a blessing that the fashion world didn’t have to make the hour-long trek to the Fondation Louis Vuitton for Nicolas Ghesquière’s latest show on Wednesday morning. Not that anyone would begrudge a trip to Frank Gehry’s architectural marvel, but it’s awfully nice to tumble out of bed and stroll to a venue, down streets scented with morning café et croissants.

The venue was the raw space of the new Vuitton superstore in Place Vendô​me, a work in very visible progress. It’s at the heart of Paris, a significance that was not lost on Ghesquière when he came to stage his new presentation. The guts of the Vuitton business is travel.  Asked where the Vuitton girl was going, Ghesquière was unequivocal:  “Paris!” His soundtrack, shaped as usual by Michel Gaubert,  featured dialogue and music from Rive Droite, Rive Gauche, a 1984 pic about adultery (France’s favourite leisure activity) starring Gerard Depardieu, Nathalie Baye and Carole Bouquet.

We’ve reached a fashion watershed this season, with the Fabulous Forties, Ghesquière and Phoebe Philo, having their thunder stolen by the Thriving Thirties, Gvasalia and J.W.Anderson.

But, much as that soundtrack and the spectacular view from the windows — Napoleon’s Column and the newly renovated Ritz — was quintessentially Parisian, the first glimpse of his ideal Parisienne was actually a woman stapled into a grey jersey dress that was draped across her body like a futuristic Amazon's garb. “Heroine!”, Ghesquèire corrected.

The slashed, sinuous, hipslung dresses that followed had a similarly gladiatorial edge. Or something else. Throughout the collection, there was a subtext of sci-fi, particularly with the finale gowns, rivers of crystal and laser-glued sparkles that looked like spacey static. It made a striking contrast with the backdrop, like Ghesquière had caught Paris in a glamorous time-space continuum.

Which was why, in this particular instance, how we sat made a difference.  The seats were stools and highbacked chairs originally designed by designer Charles Rennie Mackintosh as the 19th century turned into the 20th.  But here, what mattered most was the fact that they were re-issued by Italian company Cassina to great effect in the 1980s, the decade that Ghesquière is most attached to. He reproduced Mackintosh’s grid patterning on sheer black blouses.

There was also something inescapably 1980s in the shoulder line, in the Miyake-ish black leather body, in those streams of glittering crystals and the over-dyed, scarf-pointed hemlines which, much as they’ve been seen everywhere this season, probably meant a lot more to a guy who experienced Patrick Nagel’s 80s artwork, so definitive of the decade, in the moment.

But that definite shoulder is now irremediably attached to Demna Gvasalia, fashion’s white hot now guy, and that left me wondering about the fashion watershed we’ve reached this season, with the Fabulous Forties, Ghesquière and Phoebe Philo, having their thunder stolen by the Thriving Thirties, Gvasalia and J.W.Anderson. Thus does the Darwinian dance of fashion play on. But never has the music played quite so fast.