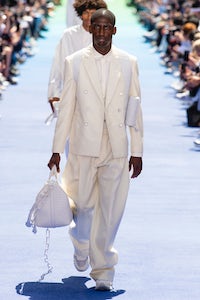 PARIS, France — Once upon a time, Virgil Abloh was the second string. His steady and rapid ascent to centre stage, consummated on Thursday by his debut as artistic director of menswear for Louis Vuitton, has been a remarkable lesson in the enduring power of the American dream. Follow the yellow brick road to Oz. Abloh acknowledged that narrative, America’s own fairytale, in his collection. The road became a motif, etched into jeans, intarsia-ed in knit. The Wizard himself was invoked in the embroidered phrase “Pay no attention to that man behind the curtain." But the “no” was so small that it was easy to miss, which made it equally easy to misread the message as an endorsement of the man who’d once been behind the scenes. Pay attention to that man behind the curtain, stepping out now into the spotlight, because his moment has truly arrived.

The spotlight was the sun itself, beating down on a catwalk created by the allée of trees that bisects the Palais Royale, one of the most beautiful inner city parks in Paris. It was divided into zones, every colour of the rainbow, with each section lined with people wearing t-shirts corresponding to the colour. This spectacular visual representation of harmonious human diversity was underwritten by LVMH, the world’s biggest luxury conglomerate. “The world is changing,” Abloh observed benignly a day earlier as we previewed his collection. “Six weeks ago is different from now. The whole premise is adjusted.”

He’s prone to such oblique speculation, but, in the light of his new position, this particular premise was huge: does the world need more clothes? “I’m a creator, so I’m always creating something,” he told me. “Whether it’s a music playlist or sneakers or a chair for Ikea [one of an entire litany of collaborations], I only try to make things that have a reason to exist. Does the world need another jacket? I’m only going to make one if it has a reason to exist.”

Abloh claimed that, in the six months of fan dancing around the Vuitton deal, the first question he wanted an answer to was this: “Has anyone stopped and thought, why does Louis Vuitton make clothes?” He felt there was a missing link. “There needed to be a connection between the aesthetic of the brand’s clothing and the brand’s heritage. Vuitton is a malletier, not an atelier. Saint Laurent and Cristobal Balenciaga created silhouettes that translate to their name, but Louis Vuitton’s signature shape is a trunk, which doesn’t translate into ready-to-wear.”

Finding and making a connection has been Abloh’s immediate challenge with his first collection. He found it in a pocket. A functional facet of clothing, it carries things and connects, in a broader sense, to Vuitton’s long history with accessories. That was Abloh’s Eureka moment. He could create something brand-definingly new that would sit between pocket and garment. “Accessomorphosis," he and stylist co-conspirator Christine Centenera dubbed it.

In essence, this thing was a harness with pockets. It was distinctive in Thursday’s show, in white crocodile as an accompaniment to the opening all-white passage, then morphing all over the place, twelve variations in all. I mentioned that Helmut Lang pioneered the notion but Abloh was unfazed. “So it’s been done?” he shrugged. “You know my style. My concern is doing it with a purpose for now.”

In “The Vocabulary according to Virgil Abloh," which was tucked inside the shownotes, he had an umbrella for such borrowing: “Margielism." Defined as “a term applied to garments or accessories which reflect the normative fashion religion of a reverent generation of young or younger designers to which Virgil Abloh belongs." Reverence trumps originality. So there.

Return to premise: does the world need more clothes? Abloh agreed that the solution was the creation of value. “I create value by contrasting the existing,” he said. “A lot of stuff I do is dialoguing the context.” Making a sneaker look different, in other words. Or transforming banality. Abloh performed a bit of that alchemy on Thursday. First with a Hane’s t-shirt, duplicated stitch for stitch for ribbed neckline in magic leather whose texture matched the original’s cotton. (“I believe in casual, undone luxury,” said Abloh. “That’s where the Hanes comes in.”) Then came hippy-trippy tie-dye, the curious soul of the collection and Abloh’s favourite part.

His soundtrack launched in freeform acid-drenched Syd Barrett guitar noodlings, segued into Kanye angst, then moved on into what I really hoped was Sun Ra, musical avant-garderie of the fifth dimension. It matched the evolution of the show, the pristine all-white opening (take that, logomaniacs) beamed through a prism, exploding into colour. “The white line is Off-White, the prism is Louis Vuitton,” said Abloh.

It opened a doorway to Oz, and Dorothy sleeping in a field of poppies, the image beaded on the back of a bomber jacket, the strangest and most seductive piece in the collection. “It becomes a story on styling,” Abloh continued. “Exuberance. Like Marc Jacobs who was here at Vuitton when I was in my 20s. That’s the DNA that I was living and breathing. An American designer bringing exuberance to Paris.”

Designer? “I visualise, I never had tools,” Abloh acknowledged. “I’m not a traditional designer; I don’t think I can just launch a trenchcoat in white crocodile.” He paused for a sly moment.“I’m learning to. Like, this is foundation level.” He talked about “the three percent twist," the little touch that made something his. “Own it, mark it.” On his Off-White trainers for Nike, that would be the zip tie. For Vuitton, Abloh has made a ceramic chain, white as a necklace, orange as a detail on those all-important bags. More alchemy — elevating the unprecious. “You could buy this bag already in a store, but the chain makes it mine,” he said, indicating an otherwise pretty ordinary LV duffel. It seemed like such a little, obvious thing, but so did the Beatles at some point.

Perhaps some similar, primal social mechanism is the key to Abloh’s success. He has connected so immediately and so viscerally with a massive constituency. The Palais Royale on Thursday was unlike any fashion event in recent memory, with its anticipatory outpouring of goodwill. For all its scale, it felt almost like a family affair. Abloh had rounded up friends to walk for him – musicians Kid Cudi, Theophilus London and Dev Haynes, artist Lucien Smith – alongside a new generation of performers, like Playboi Cardi and Octavian. Tears were shed at show's end. “When I was a kid, I never saw people who looked like me at a fashion show, especially at this level,” Abloh mused. “I’m not coming for me, I’m coming for my community.”