What John Galliano has been doing at Maison Margiela looks like an attempt to (re)create a modern folklore in fashion. This collection clarified that intent. 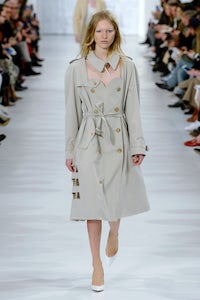 What John Galliano has been doing at Maison Margiela looks like an attempt to (re)create a modern folklore in fashion. This collection clarified that intent.

PARIS, France — John Galliano once described his process at Dior as boulversé. It could apply equally to Maison Margiela, with its upending of orthodoxy. Galliano stuck upside-down bags on models’ heads during his latest show on Wednesday morning. But his mot de jour is now decortiqué, used to describe the gutting of garments to expose their essence.

The French dictionary definition reveals that the word is usually applied to peeling prawns or shelling pistachios, and if that comes as a surprise, then that is surely the essence of Galliano. And Margiela too. If Galliano’s latest collection for the house that Martin built seemed offbeat with its oblique nod to Marilyn Monroe, it pays to remember Maison Margiela’s enduring fascination with Las Vegas.

The spirit of Marilyn was, we were advised, present in a trenchcoat, a black sweater, a slinky sheer dress and a varsity jacket (where have you gone, Joe DiMaggio?). Each of them, sweater aside, had been dissected, so they were skeleton clothes. Body paint created a slip for the dress. Across its back, the trench featured the Statue of Liberty’s spiky tiara carved out of cloth. Two icons for the price of one.

“Iconography is founded in collective emotions created by the memories which unite us and give us hope,” quoth the shownotes. But it’s often been a Galliano tactic to subvert the iconography of fame for his own wilful purposes. That’s one way he twists the familiar into strange and often wonderful new shapes.

Here, there were all sorts of normal dragged sideways. There was very little that was left in its virgin state. The most immediately appealing expression of this impulse was something that looked like a sober, buttoned topcoat from the front and a sweater slung over shoulders from the back. The sweater’s rollneck still clung to the model’s throat, wondering where the rest of its body was.

And so it was with skirts reduced to a cage of seams, or a coat in fake python (Ossie Clark would have recognised it), butchered and rebuilt with red checked wool. Or the random applications of coloured wool to an army coat. One suit looked like it had been cut from a kilim and embroidered by a junior school’s art class.

Deliberate naïveté might at first seem like an odd ploy on the part of a designer as sophisticated as Galliano, but what he has been doing at Maison Margiela looks to me like an attempt to (re)create a modern folklore in fashion. This collection clarified his intent. Hence, Marilyn, a decortiqué varsity jacket, and a long, trailing muffler that your granny might have knitted as her eyesight failed.